You are here: Home / Home / Carousel / Tenor students study law and get their day in court
Share this... 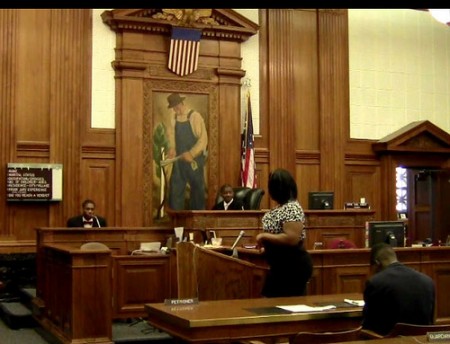 “Today, ladies and gentlemen of the jury, I ask you to let Jessie Drew go free because she did not commit this crime,” said Malik Williams, a Tenor High School student participating in a recent mock trial competition as part of Marquette Law School’s Street Law program. Williams was the first of 22 students from Tenor, a charter school at 840 N. Jackson St., to appear in court.

Looking professional in a white shirt and tie, Williams betrayed no frayed nerves as he presented the opening statement for the defense. “Thank you counselor,” said presiding Milwaukee County Circuit Court Judge Carl Ashley as Williams stepped down from the podium. The judge then directed the prosecution to call its first witness.

Across the hall on the fifth floor of the Milwaukee County Court House, the other half of Tenor’s “Team Yellow,” took up the prosecution’s case before Court of Appeals Judge Kitty Brennan. Later in the evening, the two groups switched places and argued the other side of the case. Forty-two students from Hmong American Peace Academy, Hope High School and New School for Community Service did the same.

The mock trial competition gives students the opportunity to take what they have learned in class since the beginning of the school year and put it into practice in real courtrooms before real judges. The students took on the roles of attorneys, defendants and witnesses.

Tenor High School social studies teacher Hilary Minor along with a teacher at the Hmong American Peace Academy will hold an additional mock trial, what she calls a “mini-competition or scrimmage,” for the students at the end of the school year. 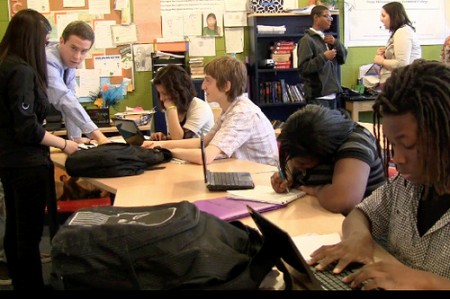 According to Street Law director Notesong Srisopark Thompson, an attorney and adjunct professor at Marquette Law School, the program exposes the students to different areas of the law, especially “law that they see in the streets.”

“We inspire the students,” Thompson said, to think about how laws came about and how to be better citizens by abiding by those laws. “If there’s a law that they feel is unjust then they need to understand why it is and maybe do something to correct it.”

The program also encourages students “to shoot for higher dreams and raise the bar for themselves and their education,” she added.

Minor, who has been involved in Street Law for two years, said that working with Marquette law students allows the teenagers to feel connected to the community. After the competition last year, she said she noticed that her students “felt a real sense of accomplishment and a real confidence in their public speaking that you don’t often find among high school students.”

“Law students always say that this is the best experience they have had in law school,” Thompson said. It gives them a chance to give back to the community, to work with kids, and a chance to brush up on skills that they’re going to use as lawyers.”