You are here: Home / Home / Carousel / Students DREAM of better future for immigrants
Share this... 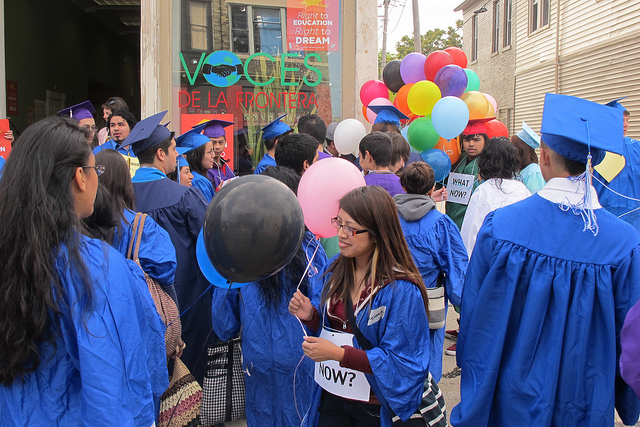 In Milwaukee and across the country, young people gathered recently to show support for the “Right to Dream,” campaign, an immigrant-rights movement that organizers hope will result in passage of the DREAM Act. The Milwaukee event was held at the Voces De La Frontera headquarters, 1027 S. 5th St.

Janeth Zorilla, who wore a symbolic cap and gown along with the other student demonstrators, is a junior at St. Thomas More High School who says she’s undocumented and worried about being able to afford college. 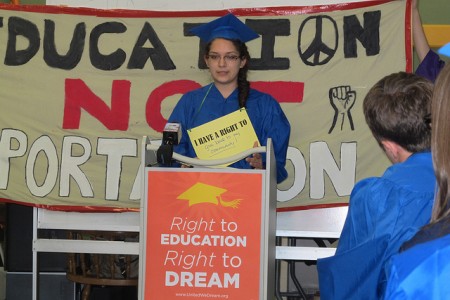 Janeth Zarilla, an undocumented student who aspires to go to college, speaks at the event. (Photo by Edgar Mendez)

Zorilla plans to apply for scholarships that don’t have citizenship requirements to pay for college.

Jose Trejo, a teacher at the Advanced Learning and Academic Studies School in Milwaukee, told the group that he was born out of the country and brought to Milwaukee as a child.

“I was undocumented when I graduated,” Trejo said.

Trejo said that after a long process he finally obtained legal status and he wants the same for other students.

The students released balloons signifying their aspirations for a better future for immigrant youth in Wisconsin and across the country.

“I don’t want to let life pass me by without realizing my potential; I’m not tired of dreaming,” Zorilla said before the students released their balloons.