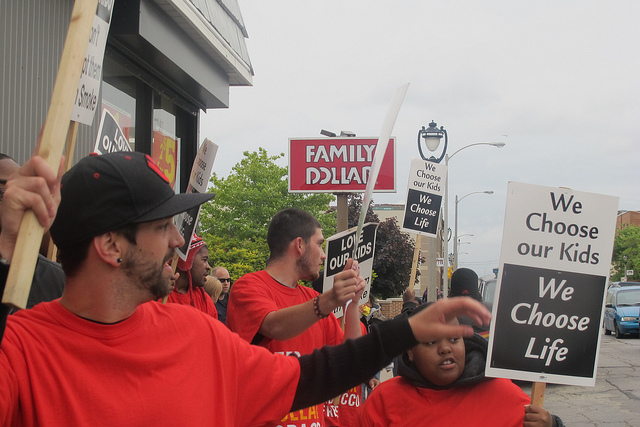 The Youth Rising Up group at Pathfinders is not happy that tobacco is now among the products the Family Dollar store chain now sells to its budget-conscious clientele.

The group recently held a boisterous protest in front of the Family Dollar store at 930 N. 27th Street, one of nine in Milwaukee.

Youth Rising Up is one of several programs at Pathfinders, 4200 N. Holton St., that aim to help young people take charge of their lives, connect with resources and contribute to the community.

Chanting “knock knock, who’s there, a company who doesn’t care,” the group of teens marched up and down the store’s west sidewalk, gaining the attention of drivers passing down the busy street, police patrols and Family Dollar customers.

The young people followed that protest by speaking out against Family Dollar at the city’s Judiciary and Legislation Committee meeting at City Hall. 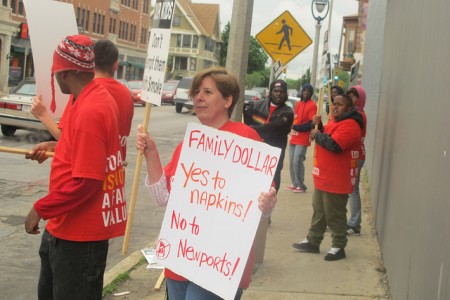 Members of Youth Rising Up protest the sale of cigarettes at the Family Dollar store, 2510 W. North Ave. (Photo by Edgar Mendez)

“They shouldn’t have them here; now they sell baby food, clothes and cigars,” said Chojnacki, shaking his head and rejoining the group for a chant of “no cigs for the kids.”

Shante House, who lives near the store on North Avenue, said that the group is wrong in singling out Family Dollar.

House said that Family Dollar is just like any other store and should be able to sell what it wants, adding that cigarettes are sold at every gas station.

Marty Hagedorn, leader of the Youth Rising Up group and program coordinator at Pathfinders, disagreed, saying that the decision to sell tobacco conflicts with the store’s family-friendly image and also that it’s unfair that people in poor neighborhoods are bombarded with damaging products.

By protesting, Hagedorn hopes his group can open the eyes of the community and also county supervisors, who are expected to draft a statement soon opposing the ease in which stores are allowed to sell alcohol and tobacco in poor neighborhoods, according to Hagedorn.

“There are not enough limits or regulations keeping stores from selling harmful products in disadvantaged neighborhoods,” Hagedorn said.

County Supervisor David Bowen of the 10th District also lent his support to the protest in a press release. He stated, “This demonstration lets Family Dollar know that people in neighborhoods where these stores are located want them to stop making it easy for kids to get hooked on these harmful products.”

He also noted that low-income people have the highest smoking rates, mostly due to targeted marketing.

Most of the Family Dollar stores in Milwaukee are located in high-poverty neighborhoods.

The group plans to follow up with more protests at Family Dollar stores across Milwaukee, Hagedorn said. Family Dollar representatives could not be reached for comment.