You are here: Home / Home / Carousel / Palermo’s strike leader speaks out
Share this... 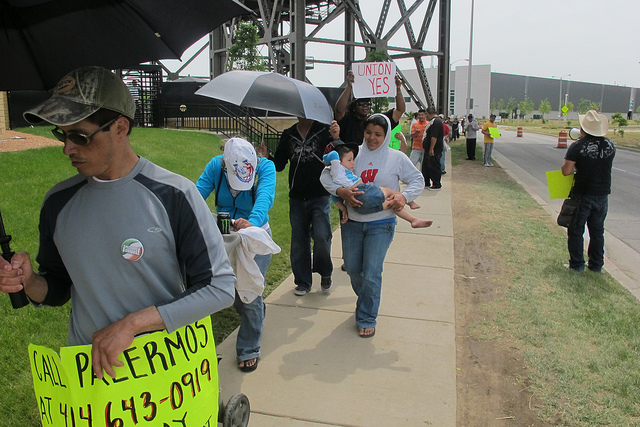 Roberto Silva thinks back to 1999, when he began working for Palermo’s Pizza company, then run out of two houses connected front-to-back on West Maple Street on the south side of Milwaukee.

He remembers the company expanding to include the house on the left and then the one on the right.

Now, Palermo’s is housed in a sprawling new building at 3301 W. Canal St., but instead of being inside doing his job as a second shift team lead, he’s outside, marching up and down the sidewalk as the sun beams down on his gray hood.

Silva and 150 of his co-workers are on strike.

They’re marching for improved work conditions, better wages and job security, which they believe will come only if they form a union.

The strike began on June 1.

According to Silva, company representatives have yet to sit down and negotiate. He said that the company is trying to thwart their effort to unionize. 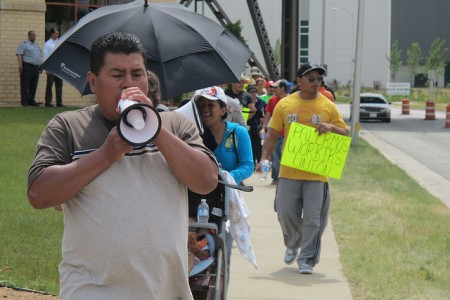 According to Silva, most of the workers’ grievances are related to the company’s expansion. As the company grew, pressure for production increased, time spent training new employees was slashed and intimidation grew, Silva said.

“People who’ve been working here for a long time were damaging their bodies while new workers are being forced to run dangerous machinery with little to no training all because of the pressure to produce,” Silva said in Spanish.

There was also verbal abuse, according to Silva, recalling a supervisor he says spurred the effort to organize in about 2006.

The workers approached Voces De La Frontera, 1027 S. 5th St., in 2008, asking organizers for the immigrant rights group how they could defend themselves from what they felt were unfair working conditions, Silva said.

The workers and representatives of Voces decided that a union should be formed.

Years later, groups of workers began circulating petitions calling on workers to unionize. Silva says that once word about the petitions got back to supervisors the situation got much worse.

Soon, the tension and frustration reached a limit, and the situation exploded to its current state, he added.

It’s a tough pill to swallow for Silva, who said that sometimes he used to work seven days a week and 14 hours a day for the company, at the expense of spending time with his family.

He walks the line with his co-workers knowing that his wife is carrying his second child, a girl.

The workers are living off their savings and food donated by sympathizers. Eventually, they might get some pay from a strike fund, said Silva.

He considers the situation at Palermo’s an example of corporate greed. “It’s about money and numbers; we aren’t anything,” Silva says glumly.

Workers at Palermo’s Pizza will vote July 6 to decide whether or not to unionize.

Silva acknowledges that the strikers could lose their jobs, and though it saddens him, he said feels the risk is worth the reward or the sacrifice.

“Even if it harms us personally, it will benefit us because we’ll know that the next group of workers there won’t have to suffer and pay the sacrifices that we did.”