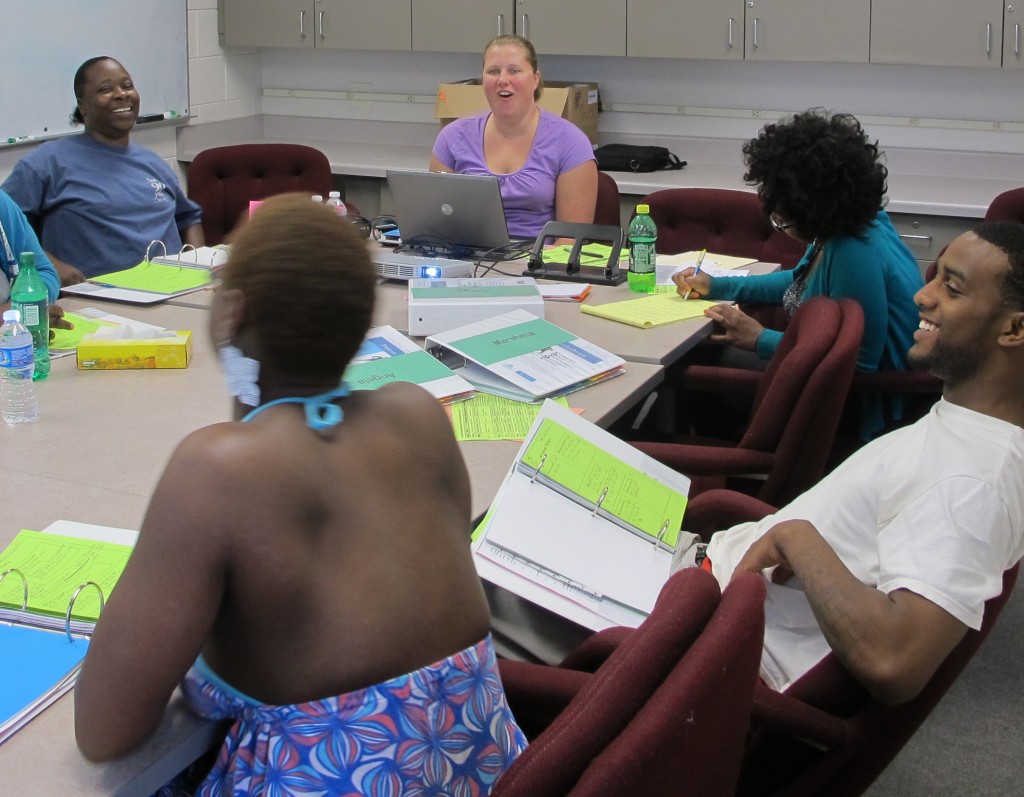 Karonda McGee knew something about immunizing her two small children from talking to their pediatrician. Then, the Lindsay Heights mother took a class at Neighborhood House of Milwaukee, which opened her eyes to a more detailed and comprehensive understanding of immunizations.

“They taught us about the importance of getting immunizations, about how many people don’t get their kids immunized and about how those who don’t get the immunizations affect the rest of us,” McGee said. “It’s especially valuable for young parents because it’s very important to keep our kids healthy so we can go to our jobs and our schools and it’s also important for our kids to go to school,” added McGee, 22.

McGee learned important lessons similar to those espoused by the Community Health Improvement for Milwaukee Children (CHIMC) project, which is part of an eight-year effort by the Center for the Advancement of Underserved Children to improve vaccination rates in central city neighborhoods. 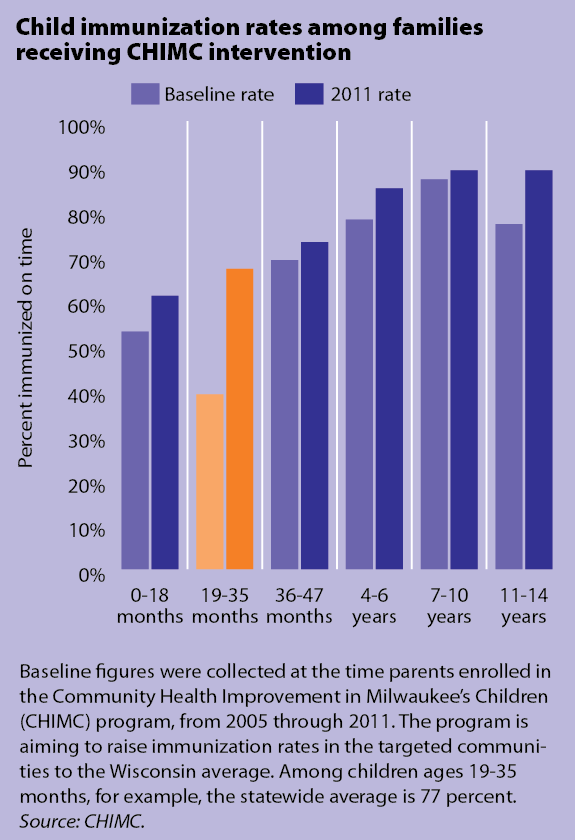 The effort is working. For example, when the program began, only 39 percent of children 19- to 35-months old in four central city zip codes were immunized on time. In 2011, that number increased to 67 percent (see graph). The goal is to reach 77 percent — the immunization rate for 19- to 35-month-old children in Wisconsin as a whole — by next year.

In 2005, the Center for the Advancement of Underserved Children, a cooperative endeavor between Children’s Hospital of Wisconsin and the Medical College of Wisconsin, launched the CHIMC project in two central city neighborhoods. Although research showed that parents perceived that their children’s immunizations were up to date, “available data indicated that central city children were immunized on time at much lower rates than the state average,” said Center Director Earnestine Willis, M.D.

“A lot of parents have a terrible fear that something bad is going to happen to their children if they get immunizations,” said CHIMC volunteer Dorothy Smith. She believes this misinformation is a product of “old wives’ tales.” In addition, some high-profile celebrities have publicized the assertion that vaccinations can cause autism, which scientific research disproves.

CHIMC began with a three-year pilot program funded through a National Institutes of Health/National Institute on Minority Health and Health Disparities grant. Its goal was to identify the main child health issue in children under 3 years old in the Concordia and Metcalfe Park neighborhoods, the 53208 and 53210 zip codes, and design an intervention plan to address the issue.

Willis stressed that a key aspect of the project is its community-based participatory research approach. This means that neighborhood residents such as Smith are invited to become active researchers and decision makers as part of the Community Forward team. Some volunteers are trained in research methodology at the Medical College.

“You have to incorporate some capacity building, some co-learning, some power sharing,” Willis said. “I see that as one of the sustaining components of this (program).”

During the pilot project, Willis and her team of staff colleagues and community partners identified 42 factors that contribute to health disparities in the targeted neighborhoods. They narrowed the list to the top five: poor education, adverse birth outcomes, mental health, violence and immunizations. In the end, they chose to focus on immunizations because “we wanted to select something that we could demonstrate some benefit in the short term,” said Willis.

In partnership with neighborhood residents and several community organizations, including Neighborhood House of Milwaukee and Next Door Foundation, the center sought to determine what was keeping parents from complying with recommended immunization guidelines. They focused on children between 19 and 35 months, the group with the lowest immunization compliance rate. Since knowledge about immunization requirements was clearly a barrier, an education program for parents of young children was the first intervention they designed. 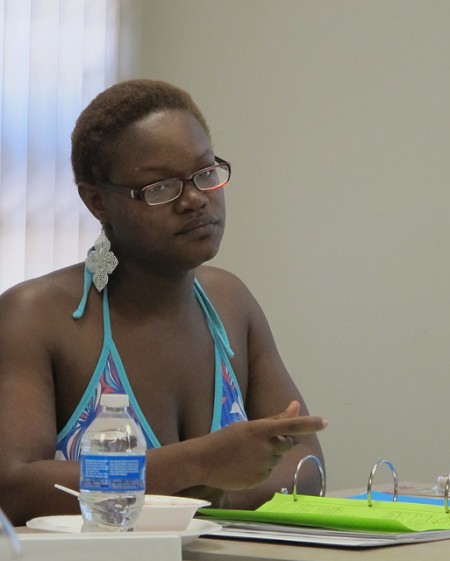 “With every parent that we enroll in our study, we do a 20- to 40-minute education session covering the immunizations that are used and the diseases that they protect against. We get into a lot of detail with the parents and answer a lot of questions,” said Katie Swank Watt, CHIMC project coordinator at Neighborhood House. “Parents often have not heard of these diseases before because widespread immunization has made them less prevalent,” she said.

Community Forward Team member Janice Harrell said the young parents’ knowledge is tested before and after these sessions and “they are so full of joy when they see how much they’ve learned.”

“We tell them that when they take their kids in to be seen by the physician they should already have their questions prepared. That way they can get more information in the 15 minutes that they have with the doctor,” Harrell said.

One long-term goal of CHIMC is to mobilize and empower neighborhood residents by helping them acquire knowledge and skills that enable them to participate more actively in their own and their children’s health care.

The project also created two other interventions: a marketing campaign with a “Take Control” message to raise awareness and a “Planned Behavior Change” class such as the one McGee attended to help small, targeted groups of parents of children under age 4.

The parents attend a series of seven classes that provide training about immunizations and general health issues such as how to talk to your healthcare provider, how the healthcare system works and how to check the Wisconsin Immunization Registry for immunization requirements.

“All of the interventions are designed to address changing behavior in positive ways, but we do it through different strategies,” said CHIMC Program Manager JoAnn Gray-Murray.

In 2008, CHIMC’s “Save Lives – Immunize” program received a five-year grant from NIH that expanded the neighborhoods covered to two more zip codes, 53205 and 53206, and added children between 3 and 14 years old. Its primary goal is to eliminate the immunization rate disparity between these children and those throughout the state. To date, 565 families living in the four zip codes have participated in the program.

Willis plans to seek grant money for a third phase of the project next year.