You are here: Home / Home / Carousel / “A Brush With Kindness” blitz saves homeowners thousands in repairs
Share this... 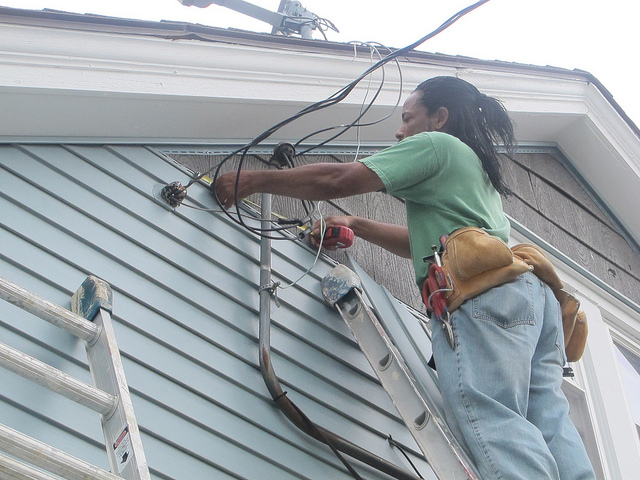 James Atkins, volunteer for Habitat for Humanity, measures the siding on a house. (Photo by Edgar Mendez) 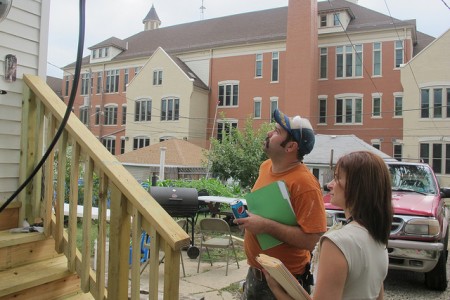 Continuing a tradition of rehabbing houses in Clarke Square, a Milwaukee Habitat for Humanity crew of more than 75, including tradesmen, homeowners and volunteers from as far away as Missouri and Indiana, repaired five homes during “A Brush With Kindness” (ABWK) blitz week.

The ABWK program helps bring homes up to code by providing improvements and repairs at no cost to eligible homeowners, according to Aaron Helt, project coordinator. The program is funded by the Zilber Family Foundation and the Margaret S. Chester Revocable Trust with paint donated by the Valspar Corporation.

The houses, all located on S. 22nd Street, needed varying degrees of repairs ranging from painting to new porches, roofs and gutters.

If contracted out, the repairs for each house would cost homeowners between $15,000-20,000, according to Helt.

Those repair costs are prohibitive to many homeowners in the Clarke Square area, including Javier and Araceli Tejada, whose home was one of five repaired.

In their application to have their home included in the blitz, the Tejadas wrote, “We have five kids and are unable to pay for necessary repairs on the house including new doors, windows and siding.”

The Tejadas added that the timeworn windows had led to huge energy bills in winters past.

“There is always so much work that needs to be done to each home,” Helt said.

Helt considers the blitz week a way to not only help homeowners, but also for Habitat to reach out to communities that don’t typically see new construction projects in their neighborhoods, although they have many century-old homes.

“Residents want their neighborhood to look good so we’re getting rid of the negative and making things new and better.”