You are here: Home / Home / Carousel / Customers get taste of Growing Power at new market
Share this... 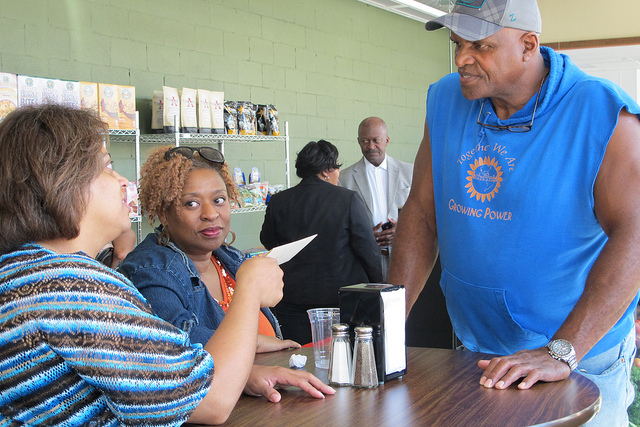 A new Deli & Food Market will bring healthy, locally grown foods to an area of the city that lacks nearby grocery stores.

“This is a food desert area,” said Growing Power Founder and Chief Executive Officer Will Allen. “There’s no grocery store within one mile,” he said. Growing Power opened the new market in collaboration with the Martin Luther King Economic Development Corp.

The market is located in the King Commons Development, 2737 N. Martin Luther King, Jr. Dr., in the Harambee neighborhood.

What was to be a grand opening was canceled due to the massacre at a Sikh temple in Oak Creek on Aug. 5. Still, Allen showed up, as did a number of community leaders, long-time Growing Power supporters, neighborhood residents and employees.

“This is the most people who’ve been here,” said Growing Power Director Karen Parker. The store had already been open for three weeks.

Nimrod Allen, who lives in the area and is a candidate for U.S. Senate, stopped by to check out the new venture and have a snack. “I was looking forward to the produce and how it would positively affect the community,” he said, taking a bite of his apple. “The service is very good. They’re very polite and prompt,” he added. 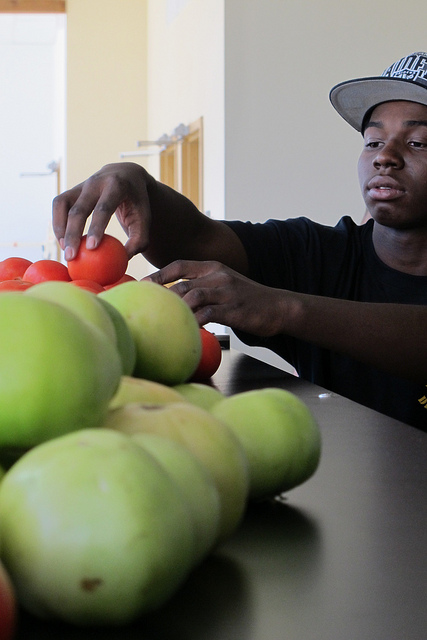 Growing Power aims to produce 75 percent of the store’s products, while the rest will come from some of the 300 farms in a cooperative the organization formed, said Allen.

One customer who works in the area and regularly shops at natural foods stores complained about some of the prices he saw in the market. He asked not to be named.

“The prices are not marketed to the people in this neighborhood. I don’t think anybody in the neighborhood will be shopping here,” he said. “In many ways this is a developing neighborhood, so 5 to 10 years down the road residents might shop here. Middle-class residents in adjacent neighborhoods will, too,” he added. He did find the deli prices to be “market-competitive.”

The deli sells sandwiches, salads, bakery and daily specialties, such as jambalaya and chili.

“We try to keep everything Wisconsin-grown,” said Executive Chef DeShawn Parker, 25. The son of Director Karen Parker, he got his start as a farmer at Growing Power when he was 6, became interested in cooking and completed a culinary arts degree at Milwaukee Area Technical College.

“I cook from the soul and the heart. I’ve learned from the people I grew up with. If it’s something good, something interesting to me, I’ll use it,” he said. He said his biggest hits so far are the turkey sandwich and jambalaya.

“I want to bring healthier foods into this community. I want them to learn from us how to eat healthier, better. I’m just trying to spread my knowledge with other people,” he said.

Eventually, said Allen, the store will employ 10 full-time staff, in addition to the farm and food-related businesses and workers it supports. 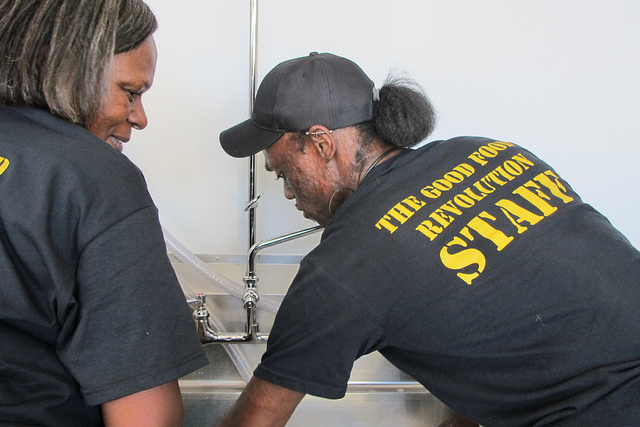 “I really enjoy working at the store and interacting with the customers,” said Washington. “I didn’t realize I knew so much. Working at Growing Power you learn something new every day,” he said.

The market is on the ground floor of a mixed-use development built by the Martin Luther King Economic Development Corp. in 2010 to provide affordable housing to more than 20 families. Regular hours are 7 a.m. – 4 p.m., Monday through Saturday. The deli and market are closed Sundays.

“Our purpose with our development is to build community,” said Welford Sanders, executive director of Martin Luther King Economic Development Corp. “Our theme from the beginning has been wellness, fitness and health.”

Exercise facilities were integrated into the organization’s first two developments.

“Growing Power was a logical choice for the market,” said Sanders, who is also vice chair of the Growing Power board of directors. Even before the store opened, the location had been a drop-off point for Growing Power’s farm-to-city market basket program.

“As King Drive develops,” said Allen, “this is a very key piece of the food system puzzle.”

The organizers view the project as a model for cities nationwide to bring locally grown food to food deserts.

“It really is a good idea in urban areas to provide a source of fresh fruits and vegetables and healthy foods…to support urban agriculture,” said Sanders.

To do this, said Allen, “You don’t necessarily have to have multi-million dollar stores. We can’t wait around for them to come back.”