You are here: Home / Home / Carousel / In Bronzeville, redevelopment still hasn’t turned the corner
Share this... 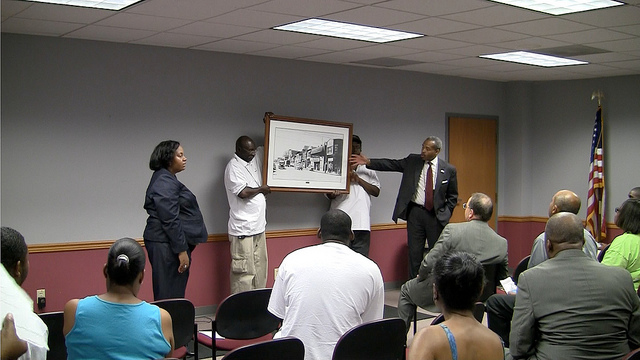 The city of Milwaukee’s on again, off again Bronzeville redevelopment effort may take a step forward soon, if the right developer responds to the city’s offer to sell land along North Avenue at a discount price.

The city recently issued a request for proposal (RFP) inviting private companies to buy and develop 230 feet of frontage on North Avenue between 6th and 7th Streets, including a boarded-up brick building dating from 1925.

The asking price for the property is $30,000. The bidding window is closed and the city will now select a buyer for the parcel if a qualified developer has come forward.

The North Avenue property that’s up for sale is part of the Bronzeville Cultural and Entertainment District — an ambitious effort to create an arts and entertainment zone similar to the old Bronzeville neighborhood along Walnut Street, which was once a hub of African American enterprise in Milwaukee. The boundaries of the original Bronzeville were 3rd Street (now King Drive) to 12th Street, and from Highland Avenue to North Avenue.

As originally conceived, the Bronzeville redevelopment project was expected to both support and capitalize on the nationally known Black Holocaust Museum. At the time, the museum was located on 4th St. just off North Avenue and was drawing 25,000 visitors a year.  However, the museum closed in 2008 after the death of its founder, Dr. James Cameron.

With the museum’s demise as a brick-and-mortar facility (it retains an online presence at http://www.abhmuseum.org), the redevelopment project lost its anchor tenant — the attraction that the city had counted on to draw visitors to the area.

Other high-profile projects, notably a sports-oriented entertainment complex backed by former Milwaukee Bucks coach Terry Porter south of North Avenue  between 7th Street and I-43, have fallen through, and those setbacks were followed by the economic recession of 2009, which dried up capital and put the brakes on real estate development nationwide.

Looking for an Anchor 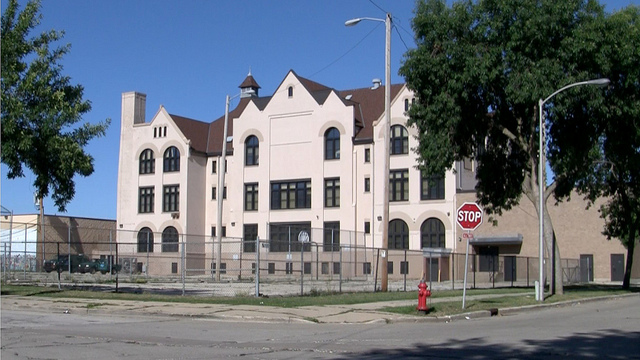 The Department of City Development is hoping to make the former Garfield Elementary School, at 2215 N. 4th St., into a community arts center that would draw visitors to the Bronzeville Cultural and Entertainment District. (Photo by Mark Doremus)

Bronzeville organizers continue to search for a centerpiece attraction to replace either the museum or the Terry Porter complex. The most active candidate is a proposed cultural center in the old Garfield Avenue Elementary School at 2215 N. 4th St. The Milwaukee Board of School Directors has approved sale of the school to the city of Milwaukee for redevelopment.

If the transaction goes through, a newer building on the south side of the school grounds would be starting point for comprehensive renewal of the property, according to Deshea Agee of the Department of City Development. The Garfield School main building dates from 1887 and would require elaborate and expensive rehabilitation, so it’s on the back burner for now.

In addition to commercial development, planners want to stimulate residential construction in the new Bronzeville. The city has offered to sell 20 vacant lots in the redevelopment zone for a dollar each to encourage new home construction. So far, according to Ald. Milele Coggs, who represents the 6th District where the Bronzeville project is located, the city has found six takers for the bargain home sites.

Louise Young-Benson is one of the newcomers.  She built a house four years ago at 2367 N. 5th St.  She moved into Bronzeville from nearby Brewer’s Hill.  She said she was attracted to the neighborhood because the location was convenient, and also because she saw the chance to do good by making a financial investment in an economically depressed part of the city. 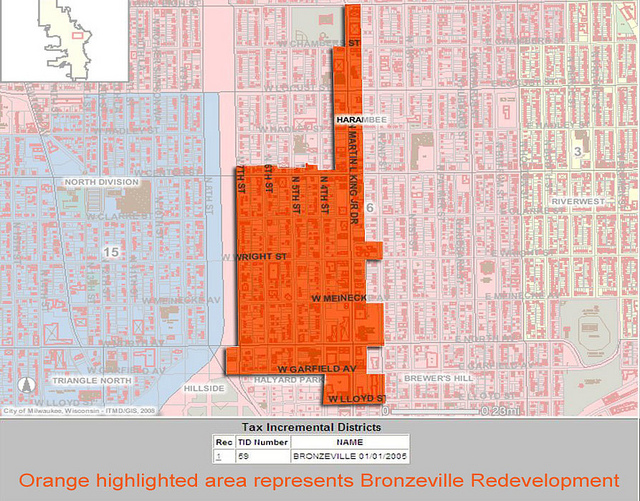 Even before she moved in, Young-Benson recognized that crime in the area, most notably drug trafficking, was a threat to her investment as a homeowner, and she set out to tackle the problem head-on.  Since she arrived on N. 5th Street she’s been active in her neighborhood block watch, which she said has been making progress cleaning up the area and controlling crime.  Acting as the eyes and ears of the police, the block watch has been instrumental in shutting down drug houses.  As dealers, and their landlords, abandoned the buildings some of them became boarded-up eyesores, Young-Benson acknowledged, but she added, “It’s better to have boarded-up houses than places where drugs are sold.”

If enough middle-class residents like Young-Benson can be drawn into the new Bronzeville area, it might create customer demand for restaurants and shops, which in turn could further stimulate commercial investment, according to a local redevelopment expert. Young-Benson said she is confident that more homeowners will invest in Bronzeville in the years ahead.

“There are really good things going on here,” she said. “I think the future’s going to be bright. As the economy gets better, I think more people are going to be interested in moving here.”

Meanwhile, neighbors and area business owners watch and wait for the redevelopment project to produce concrete results along the commercial strip on North Avenue.

Una Van Duvall, who worked in the Milwaukee Department of City Development and is now associated with Cross Management Services, a developer’s consulting firm, lives near the Bronzeville redevelopment district and has watched its slow progress closely over the years.  She said that when planning began in 2004, people were  hopeful that the old Bronzeville’s spirit of unity and empowerment could be rekindled, and the freeway and urban renewal that destroyed the old neighborhood might not be the end of the story for Bronzeville.  Plans were laid for a business, entertainment and cultural center that would draw visitors and their money from across the region to work, play and perhaps even live there.

However, so far the Bronzeville renaissance hasn’t lived up to the optimistic projections of the original planning documents. Van Duvall said that community members have been hearing for a long time that that the area was going to be redeveloped and are impatient at the lack of visible progress.  She said that the arts community in particular would like to see more tangible outcomes from the redevelopment effort. 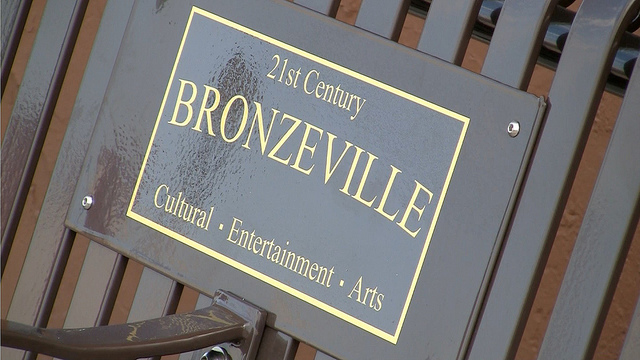 The city has installed plaques along North Avenue that brand the redevelopment area as the “21st Century Bronzeville.” (Photo by Mark Doremus)

The city claims credit for helping relocate the headquarters of the Milwaukee Urban League to an office building at 435 W. North Ave. It also lists a tavern, Garfield’s 502, among the “completed construction projects” on its Bronzeville Web site. But those projects were finished years ago. The Urban League move was in 2006; Garfield’s 502 was built in 2005, replacing a tavern called Boobie’s Place that was destroyed by fire.

The only recent development activity in Bronzeville was the renovation of the old Inner City Arts Council building (formerly a library and before that a firehouse).  According to published reports, the city contributed $171,000 to that project. The building, at 642 W. North Ave. (known for its mural on the 7th Street side), was reopened this spring as office space by the Vangard Development Group. There is another commercial enterprise next door — a nightclub called the Just Jazz and Blues Lounge, at 634 W. North Ave. — but that is not a product of the redevelopment effort.

While Bronzeville seems to have languished, redevelopment efforts elsewhere in the city have moved ahead. One reason, according to Van Duvall, may be that top-notch developers haven’t been attracted to Bronzeville.

“Where are the guys who made the Third Ward and Pabst Brewery projects successful?” Van Duvall asked. “Why isn’t their expertise being applied to Bronzeville?”

Lamarr Franklin, a partner in the Garfield 502 tavern on the edge of the new Bronzeville, is another close observer of the redevelopment effort.

“They’ve been planning this for 20 years,” Franklin said.  “The city ought to start putting some money into these properties. They’re just wasting everybody’s time unless they invest here.”

An obvious first step for the city, according to Franklin, would be to address the lack of parking in the redevelopment district.  In his view, the parking shortage puts a damper on business for the few clubs and restaurants that have managed to get a toehold in the area, including along King Drive.

Coggs, who was elected in 2008 after the Bronzeville plan was published, has publicly acknowledged that the lack of progress since 2005 has disappointed some of her constituents. She insisted that the rehabilitation of the Inner City Arts Council building is just the first of many exciting projects yet to come. But first, she argued, the city needs to find developers who appreciate the neighborhood’s potential.

Before new projects can be implemented “there is a political process that proposals will have to go through with approvals,” she said at a recent public meeting on Bronzeville, “but the first thing is just to get people to believe.”

The city will know whether any developers are interested in investing in the 600 block of North Avenue after the bids are opened and evaluated by the Redevelopment Authority.

The published request for bids does not specify when the evaluation process will be completed.