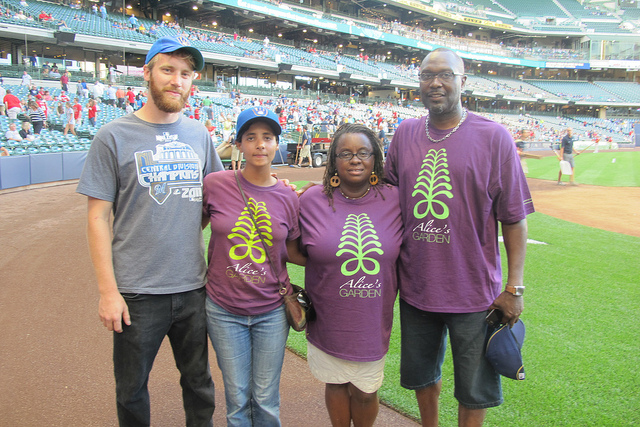 (From left) John Harrigan, Fatuma Emmad, Venice Williams and Demetrius Brown of Alice’s Garden prepare to receive their award on the field at Miller Park. (Photo by Edgar Mendez) 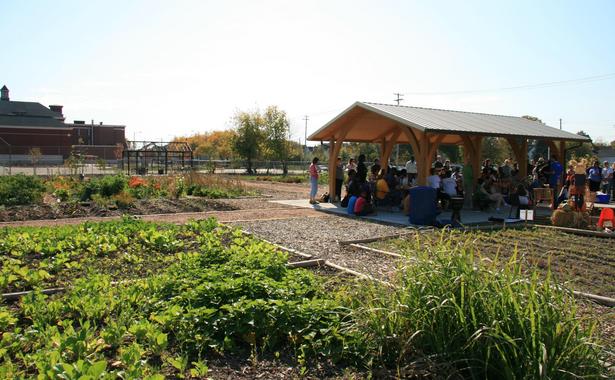 The organic garden, built over vacant parcels of land on N. 20th Street and W. Garfield Avenue, spans a two-acre section of Lindsay Heights and serves more than 90 families and a dozen community organizations.

The goal of the garden is not just to provide fresh food but also to make the idea of growing your own food accessible to families in the neighborhood, according to Fatuma Emmad, urban farm manager of the garden.

“People really buy into the idea of growing good, fresh food for their families,” Emmad said.

Venice Williams, director of Alice’s Garden, called the award an affirmation that the program is doing much needed work in the community.

“We’re honored that the Brewers and State Farm recognize the work we do,” Williams said.

Jim Camoriano, spokesman for State Farm, said that Alice’s Garden was chosen to receive the Go-To-Bat award because the program helps people reach a better state in their lives.

Said Camoriano, “This is one way we can give back to community members for dedication to their own neighborhoods.”