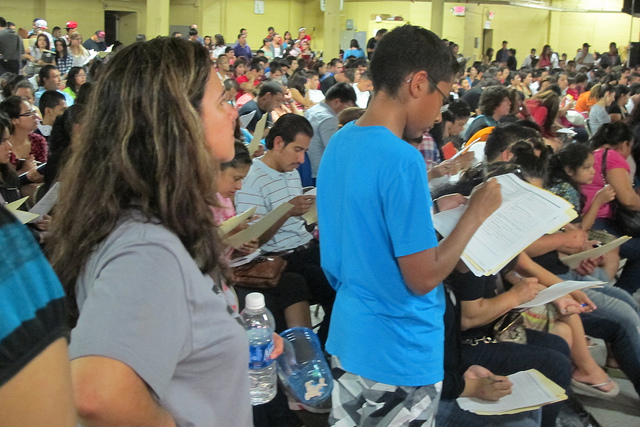 The steady stream of “Dreamers” began filing in early Sunday morning. By the time the procession ended, the dank and steamy basement at St. Adalbert Catholic Church, 1923 W. Becher, was packed with people waiting patiently for their chance to apply for the Obama administration’s new deferred action immigration policy.

That opportunity drew Ruben Esquivel, 18, to the event.

Esquivel, who recently graduated from Horlick High School in Racine, said his mother is struggling to raise her two sons on her own, and he wants to help her by getting a work permit and then a job.

“She wants me to go to college but I need to help her first,” Esquivel said.

Though Esquivel knows that the change in his legal status may only be temporary, the new policy still has improved his outlook.

“I didn’t really think about a future, I just lived on a day-to-day basis, but now I have new hope,” Esquivel added.

He was one of hundreds of youth, many accompanied by their parents, who despite the commotion of a packed house, sat patiently through a series of presentations by youth and lawyers, explaining the tedious process of filling out the government-issued form. Organizers estimated that 1,000 people attended. 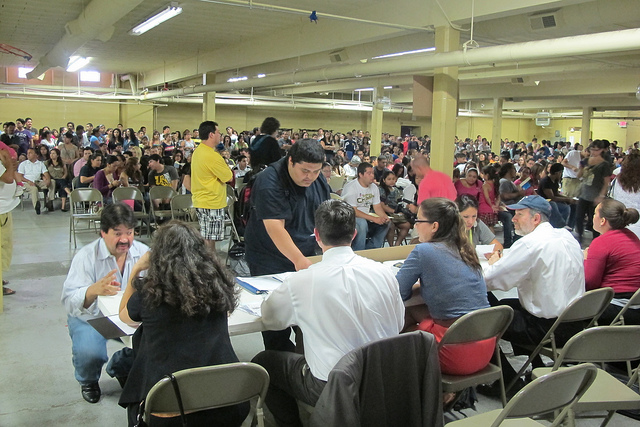 To be eligible, applicants must be between the ages of 15-30; have come to the U.S. before age 16; continuously lived here for more than five years; graduated from high school or obtained a GED, among other requirements.

They must also pass a background check.

The scene at the church mimicked what’s been occurring at registration drives across the country, including Chicago, where more than 10,000 people showed up for a recent event, according to Kate Werning, youth organizer at Voces.

Werning, who coordinated the Milwaukee event, said the huge crowd was an affirmation that the policy is crucial for undocumented locals.

“Our community needs help in their struggle for respect, dignity and equality,” Werning said.

Filling out the application, which was provided to all who were allowed into the jammed church (hundreds were turned away), is the first step of a process that will eventually cost applicants $465. Applicants will submit their applications and pay the fees via mail. But, the price was not a deterrent to those who attended.

Israel Sanchez, whose son, also named Israel, is a senior at the Milwaukee High School of the Arts, 2300 W. Highland Ave., and plans to attend college upon graduation. Sanchez said that he brought his son there to take advantage of a great opportunity, and that the high price tag was more than well worth it.

For those who were turned away as well as others interested in applying, Voces will be hosting another event in Racine this week, as well as sessions in Milwaukee each Thursday in which applicants will be guided through the process, according to Werning.

She urged those interested to call Voces at 414-643-1620 to schedule an appointment.

Christine Neumann-Ortiz, executive director of Voces, said that the policy is proof that community organizing and activism works.

“It wasn’t a gift that came from nowhere,” Ortiz said.

She added that the policy, like others that help immigrants, cannot be taken for granted, and urged the community to become even more involved in the movement for immigrant rights. For those who aren’t involved, she said, “now is the time.”

“Everything we’ve achieved can all be taken away unless we show a collective urgency and get out and vote for our supporters come November,” Ortiz said.