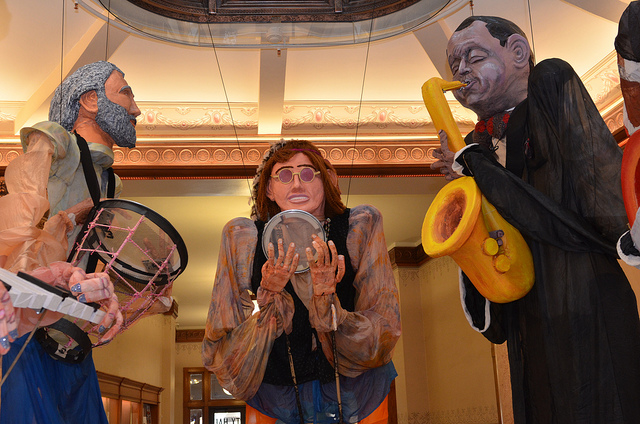 Giant puppets suspended from the City Hall atrium ceiling this month will be on display at the Labor Day parade. (Photo by Sue Vliet) 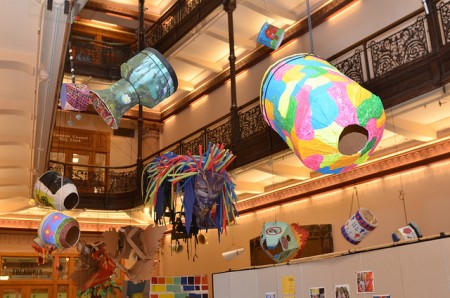 Masks and other papier maché objects were shown at City Hall. (Photo by Sue Vliet)

Milwaukeeans will soon have another opportunity to view super-sized puppets, drums, masks and other float decorations displayed at this summer’s All-City People’s Parade.

The art creations will again travel city streets in the Milwaukee Area Labor Council AFL-CIO Labor Day Parade slated to begin at Zeidler Union Square Park (between 3rd and 4th Streets on Michigan Avenue) at 11 a.m., Monday, Sept. 3. It will culminate at a free festival on the Summerfest grounds.

Hundreds of children, teens and their parents worked with Milwaukee Public Theatre artists to create the giant puppets and floats. MPT produced the summer parade in collaboration with Milwaukee Mask and Puppet Theatre. The items are decorating the City Hall atrium in August.

Among the items in the Sept. 3 parade will be giant “Musicians-from-the-Decades” puppets, including a 50s jazz sax player, 60s rock diva, 70s cult band leader, 80s disco diva, 90s punk rocker and a pop icon from the first decade of the 21st century.

Other puppets and floats exploring the theme “Finding Your Voice,” generated by youth throughout the city will also be featured at the parade.