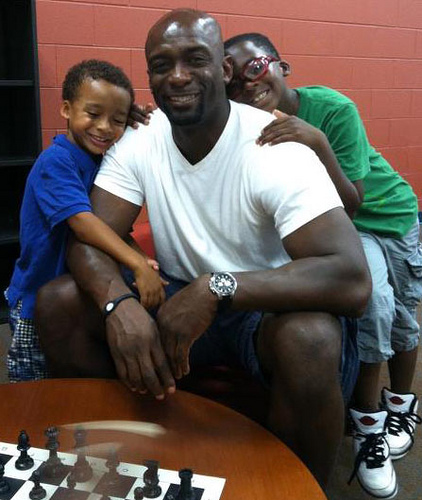 Timothy Terry, and his sons Jayden (left) and Timothy II relax in the lounge at the Journey House Center for Family Learning and Youth Athletics, 2110 W. Scott St. (photo courtesy of Journey House)

Timothy Terry, 38, grew up in a New York neighborhood facing similar challenges to those in Clarke Square. He decided to get involved, joining Journey House’s board of directors in February. Recently, Terry was named one of The Network Journal’s 40-Under-Forty Achievement Award winners for his impact on his profession as well as his contributions to the community.

The award honors men and women under 40 years of age, whose professional accomplishments have significantly impacted an industry or profession, and who’ve made an important contribution to their community, according to The Network Journal’s website.

Terry, who is the assistant director of pro personnel for the Green Bay Packers, joined the Journey House board in February, after completing his master’s thesis at UW-Green Bay. He titled his thesis project, “Endangered Species: a Study of the Black Male in Wisconsin.”

A former professional football player who retired from the NFL in 2003, Terry played with the Bengals, Chiefs and Seahawks.

The study examined African American poverty rates and other disparities in Milwaukee and nearby cities. He became intrigued with the way Journey House utilized academics and athletics to help promote change in the community. Terry said the Clarke Square community where Journey House is located is very reminiscent of the Long Island, N.Y. neighborhood where he grew up.

“The multi-racial culture and climate of the neighborhood, as well as the challenges, financial and academic, were similar,” Terry said.

Those commonalities and the fact that he saw a team of dedicated community members, professionals and organizations working together to bring change to Clarke Square drew him to become more active in the community. 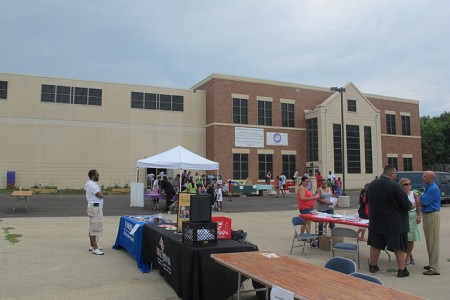 Terry envisions the Center for Family Learning and Youth Athletics as a catalyst for positive change in the Clarke Square neighborhood. (Photo by Edgar Mendez)

“The fact that there were so many champions for their cause doing work there with the best interests of the community in mind assured me that I could learn a lot from them by working there,” Terry said.

Michele Bria, Journey House CEO, considers Terry, with his experience and desire to spark change, an invaluable addition to the Board.

“We look forward to the unique perspectives he will bring to our youth athletics programs and the energy he brings to everything else he’s involved in,” said Bria in a press release.

Terry believes that the sky is the limit for Clarke Square, referring to the newly opened Center for Family Learning and Youth Athletics as a beacon of change and hope for the neighborhood.

“The center provides the same things you see in more affluent neighborhoods, and also is something that the community can take ownership of,” Terry added.

He considers community geared programming, such as that provided at the center, crucial in helping individuals go beyond their usual borders to break some of the negative cycles and divisions that are often found in high-poverty communities.

Terry also views the center’s emphasis on athletics as a key part of the shift of attitudes. He said that athletics benefit people by providing lessons on structure, discipline, teamwork and commitment through adversity, among other life lessons.

“I still carry with me lessons and other positive messages that I heard from coaches and other mentors as a kid.”