You are here: Home / Home / Carousel / Ground broken for 24-acre park in Menomonee Valley
Share this... 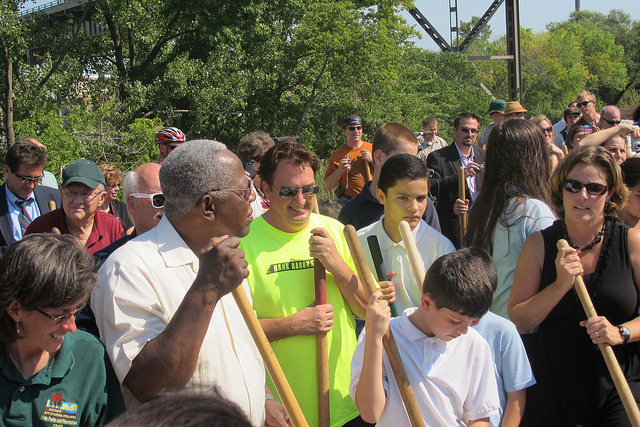 Baseball Hall of Famer Hank Aaron (left) and members of the community prepare to break ground on a park along the Hank Aaron State Trail.

According to Ken Leinbach, executive director of the Urban Ecology Center (UEC), the polluted, vacant land in the Menomonee Valley was too close to the river and train tracks for industrial use. So, for decades, the unused land served as little more than a barrier for residents of the Clarke Square and Silver City neighborhoods on the south side from jobs and other opportunities in the valley.

But in 2010, a comprehensive effort spearheaded by the UEC and Menomonee Valley Partners (MVP), along with the City of Milwaukee, State of Wisconsin, a dozen other community-based organizations and countless individuals, began repurposing the land, “From the Ground Up.”

The “From the Ground Up” initiative has resulted in the soon-to-open UEC Valley Branch, 3700 W. Pierce St., and now, a 24-acre park built along the Hank Aaron State Trail and connected to the south side via the Valley Passage walkway. It’s the latest project in an extensive effort to reconnect the surrounding neighborhoods to economic and environmental resources in the Valley.

The marsh-themed park, which will feature 50 community plots, 400 acres of natural environmental space, local art installations and countless educational opportunities for area youth, is within three miles of 400,000 Milwaukee County residents, according to Cecelia Gore, executive director of the Brewers Community Foundation.

“One hundred thousand of those residents are under the age of 18,” Gore said. 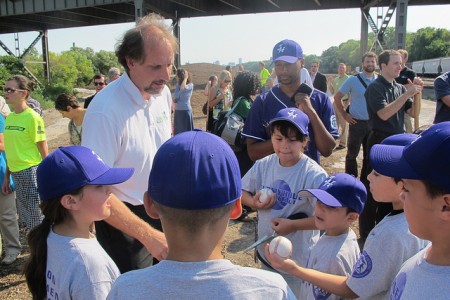 The groundbreaking ceremony, held on a picturesque late summer morning, was highlighted by a visit from trail namesake and baseball legend Hank Aaron, who praised those in attendance for pushing the many young people in area in the right direction.

“You’ve given them something to do,” said Aaron to the enthusiastic crowd.

“What we want to do is connect with schools in our area and bring students to the UEC and the park to learn during and even after school,” Adams said.

Following the model of the UEC branches at Washington and Riverside parks, Pierce will use the park as an outdoor environmental classroom.

Miriam Miranda, who grew up in Milwaukee and is a social worker for the nearby St. Rafael the Archangel School, 2251 S. 31st St., said that the park and the opportunities it will provide has given her a new sense of excitement not just for her students, but even her own child.

“There will be canoes on the rivers, snowshoes and outdoor classrooms… things they’ve heard about but not many have had access to them,” Miranda said.

The initiative will also eventually include a bridge connecting the park in the Valley to the Mitchell Park Domes in Clarke Square.

Michele Bria, CEO of Journey House in Clarke Square, looks to the park as another opportunity to build upon her organization’s strong relationship with the UEC and MVP.

“We’re all about finding places for the youth in our neighborhood to worship, learn and play,” said Bria, flanked by members of the Journey House youth baseball team.

To date, the “Ground Up” initiative has raised $22.4 million of its proposed goal of $26 million, according to Laura Bray, executive director of MVP, who said the Menomonee Valley will continue to come to life in different ways.

“It will meet needs of public health, improve job access and improve the quality of life for people in Milwaukee.”