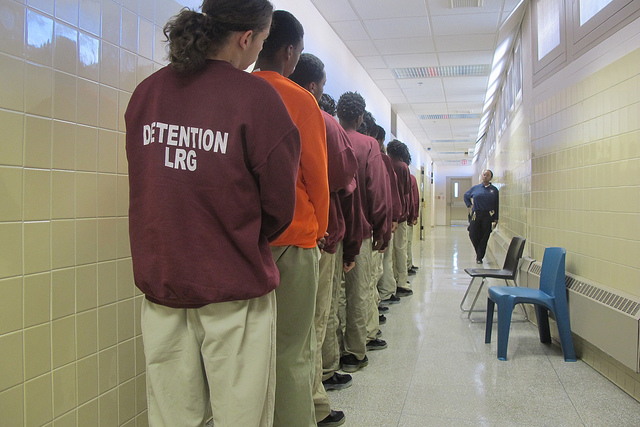 For the past year, male juveniles from Milwaukee County sentenced to incarceration were sent four hours north to the Copper Lake and Lincoln Hills schools in Irma, Wis. Recent changes approved by the Milwaukee Common Council will keep some high-risk young offenders in the county, saving taxpayers money and enabling the young men to remain closer to their families and rehabilitative resources.Read More

In the office of Curtis Woods, program manager for the First Time Juvenile Offender Program, sits a nervous 15 year-old boy.

The teen walks towards the door and Woods follows.

“You get registered for school, and then you come back here on Saturday, and I’ll help you get a job; I got you man; you ain’t alone,” Woods reassures him.

As the teen heads down the steps, Woods makes sure they have each other’s phone numbers in case the boy needs to talk. The teen walks back out to the streets, his head held a little higher than it was when he walked in.

The boy’s problems stem from the fact that both his parents have substance abuse issues.

Woods has worked with at-risk youth for more than 10 years. He works out of the Milwaukee Christian Center, 2137 W. Greenfield Ave., in Clarke Square.

Woods said that the boy’s story is nothing new to him. The biggest predictor of whether a juvenile is going to get into more trouble is whether he has any parental support, he added.

“If the kid’s parents are in trouble then the kid is going to re-offend,” Woods said.

A study released by the Public Policy Forum in July looked specifically at recidivism rates for teens in Milwaukee County.

The report used Milwaukee County Delinquency and Court Service Division (DCSD) data from a cohort of 9,106 offenders who aged out of the juvenile justice system between 2006 and 2010. The study found that 58.6 percent of the youth had no additional delinquent referrals from the police after their first one. Forty-one percent of the youth had one or more subsequent referrals. Of those who did re-offend, 56 percent did so two or more times.

Reviewing all of the juvenile admissions at the center (not just those who aged out), the study found that of the 14,709 total referrals to the Milwaukee County juvenile justice system from 2006 to 2010, 23.6 percent were repeat referrals. 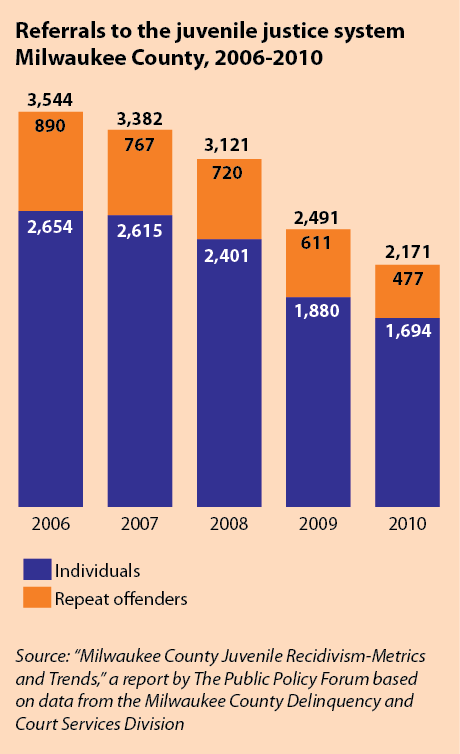 The data also show that the number of referrals between 2006 and 2010 has gone down each year. This is in line with a national trend of fewer juveniles being incarcerated, said Thomas Wanta, interim administrator of the juvenile and court services for Milwaukee County.

Milwaukee’s experience also is consistent with the national trend of a small percentage of juveniles being responsible for most repeat cases, according to Vanessa Allen, a researcher at the Public Policy Forum and the study’s author. The report called for more programs aimed at chronic offenders.

To be eligible for the Milwaukee County Accountabilities Program (MCAP) at the juvenile justice center, teens must be classified as being at high risk to reoffend.

MCAP will allow for up to 40 young males a year from Milwaukee County to be placed in the secure detention facility in Wauwatosa for up to 180 days.

Since 2011, all juvenile males sentenced to incarceration were sent to the Lincoln Hills School in Irma, Wis., too far for most of their families to visit and be a part of the healing process, according to Wanta.

All juveniles in the program will receive family counseling as part of the preparation to return to their communities. “We believe we need to work with the whole family, not just the kids, and help them learn skills and how to make better opportunities,” said Wanta.

The weekly sessions, which are overseen by a professional, are focused on preparing the youth to return home or a placement into a healthier environment.

“Family counseling will allow the kids and parents to open up and those shared experiences will foster mending,” Ross said.

Ross has raised six children of his own, three of whom are in college now. Ross said that he treats each teenager as if he were going to take him or her home for the night. There are currently 107 youth housed at the facility, which is a little higher than usual, according to Ross, but not much of a difference since he began working there 15 years ago.

The facility has 132 7-by-7-foot cells. Inside, new arrivals will find the few possessions provided by the county. They include a lean brownish mattress, comb, thin blanket, small white hand towel, a few layers of toilet paper, toothbrush, shirt and a copy of the rules.

Most of the juveniles arrested on a recent day appeared to be no older than 13. The reason they were there, according to Ross, is not a blatant disregard for the law, but the result of low self-confidence caused by their painful childhoods.

“The kids you see coming in here are hurting and unfortunately they’re committing crimes while they’re hurting,” Ross said. He added that their pain stems from the home and so do their bad habits.

“If you’re living in a household with no jobs and you see that the only one that’s able to provide for the family is the one selling dope, then you’re going to want to sell dope too,” Ross said. Arrests follow and pretty soon the teen runs out of chances, ending up at a secure detention facility such as Lincoln Hills or Phillips.

But locking teenagers away is not the answer, according to Ross. “These resources, our kids, are being thrown away when they’re locked up.”

Added Ross, “They need to stay in Milwaukee and become positive contributors to our communities instead of being sent away.”