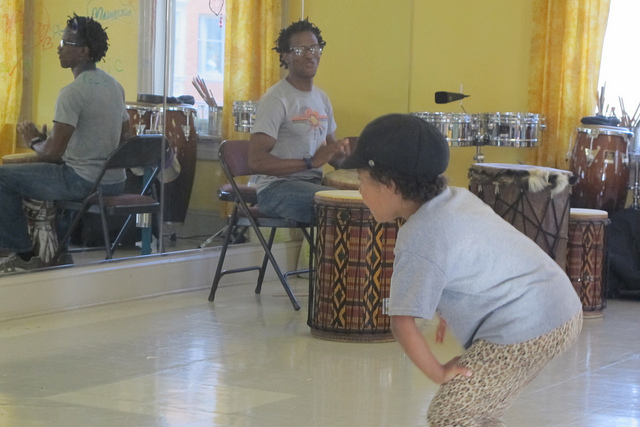 In an upstairs studio at Walker’s Point Center for the Arts, a drummer beats a Djembe, a skin-covered drum with origins in West Africa. Dancing to the deep, rhythmic beats are six intent youngsters, crouching, jumping and swinging their arms side to side.

The students are learning the principles of the African Ameri-dance program, which participants describe as a combination of nutritional, emotional intelligence, African dance, drumming, capoeira, modern forms of hip-hop and break-dance training.  The lessons are part of the Site-On/Hands-On (SOHO) programming at WPCA, 839 S. 5th St..

WPCA and 40 additional community-based organizations were recently awarded grants totaling more than $1.3 million as part of Milwaukee Public School’s (MPS) Partnership for the Arts and Humanities. The partnership will run programs such as SOHO during the 2012-13 academic year. After-school and summer programs will serve about 49,000 students from 88 schools, including 77 MPS schools, according to Kari Couture, MPS community-arts specialist.

The arts partnerships between the public and private entities began in 2006, with humanities programming added in 2010. This year, MPS approved eight new programs for the dollar-for-dollar matching grants. WPCA received $100,000, the maximum grant allowed this year. It’s been funded since the program began, initially at $50,000, according to Kate Bradley, education director at WPCA.

Bradley, who graduated from Alverno College specializing in art education, art therapy and dance, has been working at WPCA for more than five years. She said WPCA artists specialize in teaching a wide range of crafts including drumming, singing, painting, mural making and ceramics. 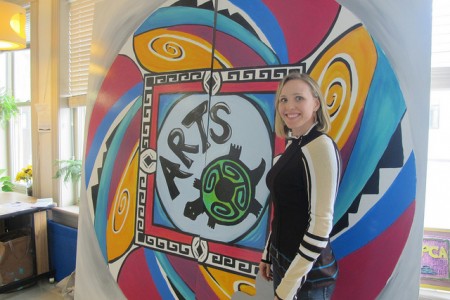 Kate Bradley, education director at the Walker’s Point Center for the Arts (WPCA), displays a mural that will be placed in front of the building housing the Dover Street and Tippecanoe schools at 2751 S. Lennox St. (Photo by Edgar Mendez)

“The arts we teach reflect the diversity of the students we serve,” Bradley said.

The wide mix of lessons extends beyond the walls of the center into the community, as WPCA’s 34 professional artists head to nearby schools to work with students, including at-risk youth. Bradley, who described the grant as a windfall for her organization, said arts programs have many benefits for students.

“Art helps them in multiple areas, visually, therapeutically, they have more energy and it helps to increase their attendance and benefits other academic areas,” she said.

It also helps to fill the void left after funding cuts in MPS arts’ programs forced many schools to eliminate full-time art teacher positions. The cuts resulted in loss of the equivalent of about 26 full-time art teachers between the 2011 and 2012 budgets, according to an MPS report.

The proposed MPS budget for 2013 includes more than $13 million in funding for art, music and physical education and an additional $581,000 specifically for the art program.

According to Couture, Peter Thomas Blewett, who sits on the MPS board of directors, and Jennifer Morales, a former board member, recognized the impact the cuts had years ago and created the partnership in response.

Bradley commented that while WPCA is eager to help because art education is a necessity, “Ultimately we want art, music and gym teachers in schools full-time.”

Other nonprofit organizations are helping to bolster the humanities for MPS students. The American Civil Liberties Union (ACLU) received a grant of $10,000, down from $30,000 last year. Still, the non-partisan civil-rights organization hopes to serve about the same number of students as last year’s 2,700.

Emilio De Torre, youth and programs director for the ACLU of Wisconsin, oversees the Public Arts Student Alliance (PASA), which is funded in part by the grant. The program is run at several schools, including North Division and True Skool, and at local groups that serve youths, such as Pathfinders. It combines aspects of humanities and art to help teach young people about their civil liberties and rights in exciting new ways, according to De Torre.

“Arts combined with humanities is a very powerful way to transmit this information,” De Torre said.

Last year PASA successfully meshed the disciplines, creating a float for the Summer of Peace Parade and Rally. The float, four SUVs long, featured a representation of students going through actual pipes to jail, according to De Torre. The figurative message of pipelines to incarceration contrasted with another section of the float depicting happy children with supportive teachers choosing careers and professions.

“Creating art around an idea like a prison pipeline was a way to help the youth express an issue, better understand it and get people talking about it,” said Chloe Smith, youth and program organizer for the ACLU.

Smith, who graduated in 2003 from Riverside before heading to UW-Whitewater, said, she saw a significant drop in the availability of arts education for local students when she returned to Milwaukee.

“Art was the only way I was able to express myself as a student, so knowing that kids aren’t able to express themselves in that way makes me want to rally harder for programs like this,” Smith said.

The PASA program will run 26 workshops this year with high school students, ranging from the First Amendment to political cartooning to creating public service announcements, among other activities.

De Torre said the PASA program does more than simply fill a gap.

“The nature of these partnership programs is that they afford students the opportunity to work with talented individuals and gain experiences and values from the community and in the community that they might not get from just one art teacher.”