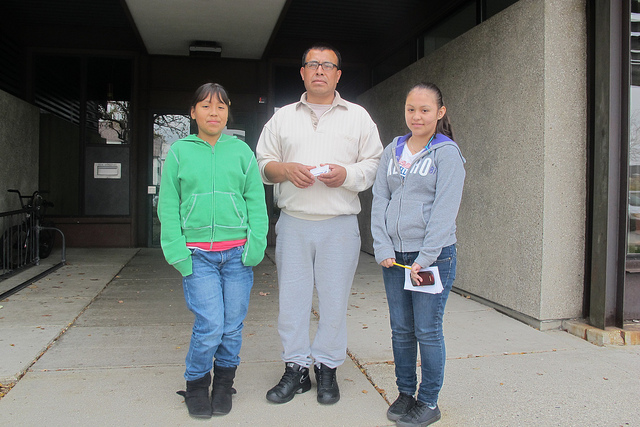 On a pleasant 50-degree fall morning, the streets of the Historic Mitchell Street neighborhood are mostly void of pedestrians. But, within the walls of the Forest Home Library, 1432 W. Forest Home Ave., more than 50 children, parents, teenagers and adults type at keyboards, read newspapers, scan movie racks and scour bookshelves.

Through the first nine months of this year, the Milwaukee Public Library (MPL) system of 13 libraries has experienced a 14 percent increase in patronage, which translates to more than 222,000 more visitors than the same time period last year. Paula Kiely, director of the MPL, said the increase is likely a result of the economy.

“In times like these with the economy struggling, people are looking at ways to economize on their budgets,” Kiely said.

Rafael Rodriguez, who was visiting the Forest Home Library with his daughters Stephania and Lorena, 12 and 11, said the library provides resources his kids don’t have at home.

“We don’t have the Internet, but here we find it,” said Rodriguez, adding that much of his daughters’ schoolwork is computer-based.

Computer usage at MPL has increased 17 percent from last year. The Forest Home Library has 21 desktop computers plus 40 laptops that can be rented out for three- hours blocks. Six of the desktop computers are specifically for children, according to Jennifer Hron, children’s librarian.

Kiely also credits the library’s popularity to an increase in the materials budget.

In addition to accessing computers or the free Wi-Fi, patrons are able to select from a vast and continually updated collection of books, magazines, audio books, music and DVDs, among other materials. Rodriguez said his daughters often check out movies from the library. The DVD collection includes new releases, documentaries, children’s movies and, this month, a rack of Halloween-themed films. 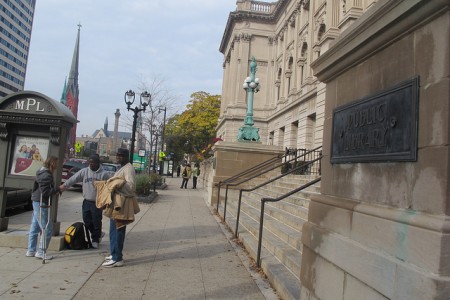 According to Christine Murphy, communications and marketing specialist for the MPL, all services and materials at the library are provided at no charge, with the exception of printing and late fees.

Petra Almaraz, who visits the Forest Home Library often with her two kids, said sometimes she goes there and pays to make copies, but aside from that, it’s free entertainment.

“The library is a great help for my family,” said Almaraz.

Attendance at the Forest Home Library was up 9.1 percent so far this year, compared to the same period last year. The largest increase was at Villard Square, where attendance increased 74.6 percent, followed by the Washington Park branch (up 31 percent) and the Martin Luther King branch (up 18.9 percent). Patronage at the Central Library increased 4.7 percent, and system-wide, it grew 14 percent.

The large increase at Villard Square is likely due to the opening of a new location at 5190 N. 35th St. in late 2011. The branch is part of a mixed-use development with 47 apartments on the upper floors and the library on the first floor.

Despite the increased attendance, the library, like all city departments, was asked to cut its budget next year, according to Kiely. The proposed budget for 2013 calls for a $1.02 million cut, or 4.5 percent, resulting in a total budget of 21.7 million.

The 2013 cuts will result in a minimal decrease in service, Kiely said. The Central Library at 814 W. Wisconsin Ave. will open at noon rather than 9 a.m. on Mondays, and librarians at six neighborhood branches will come in three hours later on Mondays, though those libraries still will open at 9 a.m. At the Central Library, patrons will be able to speak to librarians via phone and  utilize the drive-thru service to pick up pre-ordered books, both beginning at 9 a.m.

Some recent Monday morning visitors to the Central Library said the changes would affect them, but they would get used to them.

“A lot of people like to get up and get going early and get things done with,” said Mary Lewis, who enjoys reading sports, exercise and diet books.

Bruce Burtin, a lifelong Milwaukee resident who comes to the library three or four times a week, said that he also likes to get to the library early on Mondays. “I work third shift so getting up here early is optimal for me,” Burtin said.

Still, both said that because the hours will change only on one day, they would adjust.

Lewis said that people who are homeless would notice the difference because they often spend time at the library. “With the cold coming, the hour change will affect them more because a lot of them will be here open to close, trying to stay warm,” Lewis said.

The shortened hours will save the library system $300,000, with the bulk of the remaining cuts coming from eliminating the equivalent of five positions.

The Forest Home library will remain open the same number of hours in 2013, which is good news for the Rodriquez family.

As Stephania Rodriguez, 12, explains, “I love to read and the books are free.”