You are here: Home / News / Arts and Recreation / Green Bay Packers’ practice field soon to be laid out in Mitchell Park
Share this... 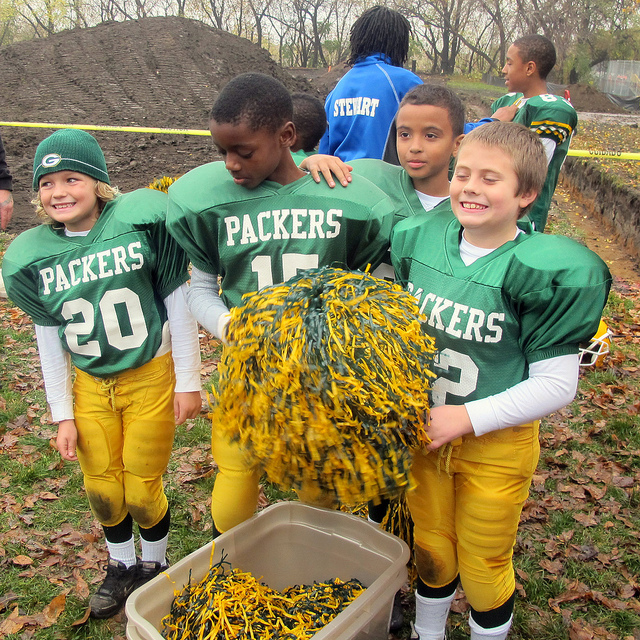 Enthusiastic and seemingly unaffected by the dreary, overcast weather, residents, community leaders, elected officials, youth football players, cheerleaders and others recently gathered on a rain-soaked lot on the southeast end of Mitchell Park to celebrate the groundbreaking for the Journey House Football Field and Stadium.

The time has finally arrived for the large sections of a synthetic turf football field, donated by the Green Bay Packers to the organization in 2009 and rolled up in a storage facility since, to be unfurled onto the muddy lot.

Laying out the donated field, worth $300,000 and emblazoned with the iconic Packers’ “G” in the center and “PACKERS” in each end zone, will not begin until Dec. 1 and it won’t be ready for games until next season. Nevertheless, young football players are already imagining what it will be like to play football on a field that Packers players once trained on at the Ray Nitschke Practice Field facility in Green Bay.

Aristede Williams, who plays running back for the Peewee Journey House Packers, said he can’t wait to get on the field and show off his skills.

“I’m one of the fastest people on the team,” Williams added.

He was there with is mother, Rebeca Areizaga, who said she appreciates the discipline and responsibility her son has learned during his three years in the league.

“I knew it was good for him so I encouraged him to join but he also joined because he wanted to play a game he loves,” said Areizaga, adding that their favorite pro player is quarterback Aaron Rodgers. 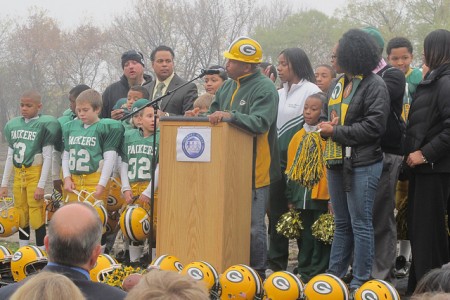 As of now, Journey House, the Milwaukee County Parks System and other partners have raised $8.9 of the $11 million needed to complete this and other projects, according to Barbara Klein, chairwoman of the Journey House board of directors. The organization will manage the field and stadium for the next 30 years. More than 500 youth affiliated with the football and cheerleading program will utilize what community leaders are calling an outdoor learning space.

“We’re breaking ground on an outdoor classroom that along with creating jobs in the community, will teach our youth lessons that will prepare them to be resident leaders in the future,” said Michele Bria, Journey House CEO.

The Clarke Square neighborhood where Mitchell Park is located will become the first community in the United States with an official National Football League (NFL) field with logos, Bria said, as the crowd launched into an impromptu cheer of “Go Pack Go.”

Mayor Tom Barrett and John Chisholm, Milwaukee County district attorney, both remarked that having a field and creating additional activities in the neighborhood addresses public concerns for the safety of area youngsters.

“For anybody concerned about the color the kids in the neighborhood will be wearing, well, they’ll be wearing green and yellow,” said Barrett.

Chisholm said that to give every Milwaukee youth a chance to succeed the city needs the help of organizations that keep kids off the streets.

“We need anchors like Journey House to provide services, and places like this to help kids learn lessons of life,” Chisholm said.

Charles Brown, youth center director at Journey House and commissioner of the Journey House Packers group of six football teams, said the field will do more than benefit the kids he works with; it will help transform the community.

“It’s a nice place for the kids to congregate, where they know they matter, Brown said, “but the field will also serve the larger vision of bringing our community together.” Brown added that he has dreamed of the field since the start of the football program at Journey House in 2005.

Brown envisions games as community events with scenes similar to what you see in Madison for the Badgers, and Green Bay for the Packers — but in Clarke Square.

“Imagine this: a marching band, a parade, heading down South 22nd Street from Journey House to the field on game day and families tailgating in the parking lot; that’s what I see.”