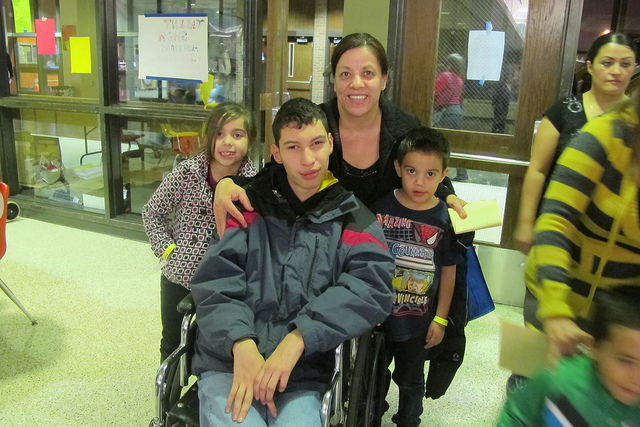 Mauro Calderon’s son Mario, who’s 15 and attends Rufus King International School, 1801 W. Olive St., has very special needs. He was born blind and needs help navigating to and from school, among many other daily challenges. His father knew from the beginning that Mario would need resources, made more complicated by the fact that Mauro didn’t know English.

Calderon was at South Division High School recently, attending the 10th annual “Foro” or “Forum Latino,” which provides Spanish-speaking parents and guardians of students with disabilities the chance to learn new strategies to work with their children and find resources to help them. Topics such as “Attention Deficit Disorder with and without Hyperactivity,” and “Academic and Behavioral Supports Available to Children in MPS,” were among the sessions geared toward empowering parents.

Parental involvement is one of the keys to any child’s success in school, but it’s even more crucial to bring the parents of students with special needs to the table, according to Jesse Rodriguez, regional director of school support for MPS.

For non-English speakers, this requires overcoming language and cultural barriers.

“The services have to be provided in a language they understand or the turnout would not be the same,” said Rodriguez, motioning to the crowd of more than 400 people at the event.

Providing services in Spanish makes for more meaningful and personal communication and also prevents loss of context in translation. “Many of the parents are coming from countries where these services don’t exist or aren’t the same,” Rodriguez added.

Calderon, from Mexico, has attended the annual event, sponsored by MPS and numerous community organizations, for the past six years. He said it started small but has been growing, especially in the past two years, adding that each time he comes he walks away with new information.

“I find out about programs I didn’t know even existed; there’s a lot of help for my son at MPS.”

There is also a lot of need. 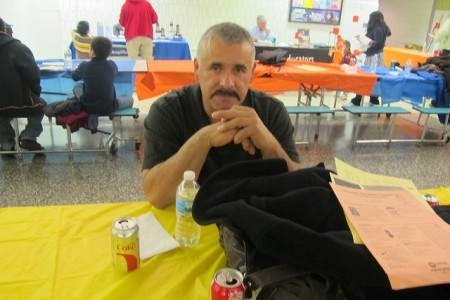 Mauro Calderon, who has come to “Foro Latino” for six consecutive years, says he learns something new every time. (Photo by Edgar Mendez)

According to Tony Tagliavia, MPS media manager, there are more than 16,000 students in the district who have some type of special need. More than 77,000 students are enrolled in MPS this year, meaning that about 20 percent are classified as special needs students. Their disabilities can range from mild to severe and the variety of needs is growing, according to Jim Lawton, regional coordinator for citywide bilingual assessment and support for MPS. Along with increasing services, the district has to accommodate their language needs, said Lawton.

“It often takes the collaboration of two or more departments to meet specialized needs of students,” Lawton said. Those MPS departments could include language, occupational health and physical therapy.

There’s also a need for collaboration with community-based programs. That’s where partners such as Alianza Latina Aplicando Soluciones Inc., known as A.L.A.S., step in. Founded in 1997, A.L.A.S. began as a support group for non-English speaking mothers of children with special needs who were frustrated by the lack of services and information available in their native language, according to the A.L.A.S website.

The forum was one of the projects that originated from that need, said Gloria Gonzalez, communications coordinator and parent information specialist at A.L.A.S. In addition to helping plan the forum, the organization provides training resources, translation and interpretation and also helps parents obtain Individualized Education Programs (IEPs) for their children.

An IEP is a documented plan designed to help teachers, parents, school administrators and students work together to meet the unique needs of each student to help improve educational results. Every child who receives services under the federal Individuals with Disabilities Education Act is entitled to an IEP.

Rubicelia Lopez, whose 4-year-old son Roland has Down Syndrome, visited the Milwaukee County Disability Services Division (DSD) booth. She attended the event last year as her son was completing the “Birth to Three Early Intervention Program,” for children with developmental delays and disabilities. That program, along with additional services provided at Forest Home Avenue School, 1516 W. Forest Home Ave., have helped Roland immensely, according to Lopez.

“He listens and dances to music and plays with other kids at school,” she said.

In addition to Birth to Three, DSD provides family support programs and a long-term support waiver program, which allows Medicaid to pay for home-based services for children with significant disabilities. DSD also coordinates with MPS to meet immediate needs, such as a recent case in which a high school student needed a wheelchair to replace his broken chair.

“We had him measured up so that he could get one that fit his specific needs and the child got a better wheelchair,” said Lydia Roman, bilingual service coordinator for DSD.

DSD helps parents such as Lopez, who speaks little English, learn about programs that could help their children.

“They shouldn’t be afraid to just ask us and see how we can help,” said Roman, adding that DSD can provide information in any language.

Under the guidance of A.L.A.S., Lopez has gotten her son what he needs. Roland climbs up and down the stairs now. His IEP is updated regularly in meetings with teachers, occupational and physical therapists and her. Lopez’s only concern is that he doesn’t qualify for speech therapy, although he doesn’t speak. Still, she’s grateful for the help he’s gotten.

“I stay in Milwaukee because of it,” said Lopez.