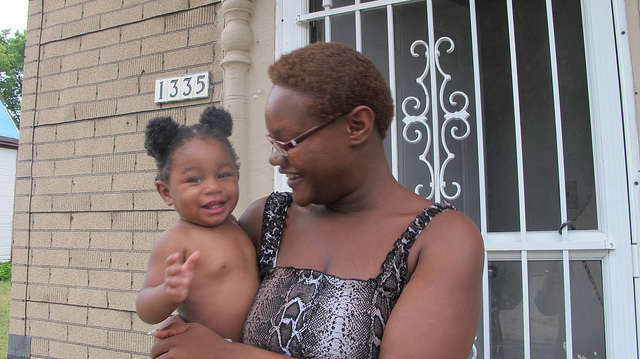 Seven North Side mothers who make up Team Dun Did Dat are looking beyond their own personal challenges to assist area families. With help from hip-hop recording company Dun Did Dat, they organize activities to feed families and encourage kids to stay in school.
Read More

The back room at Club 30 Lounge, 2575 N. Teutonia Ave., was decorated with black and white balloons on a recent Sunday afternoon, as if for a children’s birthday party. Tables in the front, near the stage, were covered with coloring books, jars of soap for blowing bubbles and arts and crafts kits. At the far end of the room, tables formed a long buffet covered with aluminum trays of hot home-cooked food.

“There are four of us who put money in and bought and cooked food: barbecue chicken, dressing, cornbread, macaroni, spaghetti, greens, potato salad, cabbage, and baked beans, to ‘Feed the ’Hood,’ ” said Jessica Wilson, founder of Team Dun Did Dat.

This grassroots group of North Side moms named themselves after the Milwaukee-based hip-hop music recording company Dun Did Dat. Wilson’s friends and fellow moms Lakima Moore, Emma Hamler, Latrice Dean and LaQuita Ross joined her in forming the core group.

The group’s original purpose was to promote the company in the community. But as members spread the word about the artists and events, they decided to help address community members’ needs for food, safety, positive relationships and constructive activities for children.

As mothers, their major concern is for children, their own and others. So they began organizing events to raise money, clean neighborhoods, feed children and adults, and provide school supplies and fun activities. Their primary goals are to keep the children safe, connected to the community and focused on staying in school, the organizers said.

The core group is small, fewer than 10, but the next tier of members, which is more fluid, participates in events and projects. Team Dun Did Dat relies mainly on social media to get the word out about its events. Since fall 2011, the group has sponsored two back-to-school events, a fundraiser to buy food for Hunger Task Force, neighborhood clean ups and several “Feed the ’Hood” events.

“I just like giving back,” said Emma Hamler, who has five children and two grandchildren. “It’s a passion. I’ve been giving back since I was able to. It’s hard for us too, but it’s a little bit harder for some others.”

Despite a last-minute change of venue, about 80 people showed up for dinner at Team Dun Did Dat’s latest “Feed the ’Hood” event.