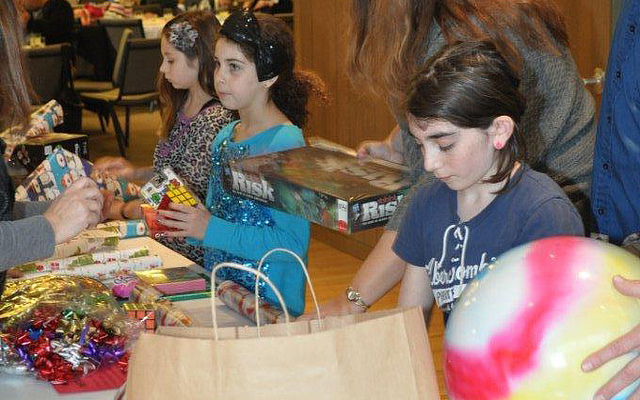 This Christmas Eve, Tikkun Ha-Ir of Milwaukee volunteer Mark Shapiro will tape a pillow to his middle and dress up in “a full-blown Santa suit: beard, mustache, hat, glasses, big belly, boots, the whole shebang.” He and his helpers, wife Sharon and daughters Sophie, 12, and Carli, 14, will visit the Cathedral Center, a downtown emergency shelter for women and families.

After hiding until the right moment, Santa will appear in the shelter’s dining areas and “I’m telling you, [the children] think I’m Santa Claus. They don’t think I’m a guy dressed up as Santa Claus,” Shapiro said. He and his helpers will present gifts of toys, blankets, socks, hand-made scarves, mittens, hats and toiletries to the residents.

“It’s a very emotional experience for all of [my family]. The first year that we went, almost the entire car ride home, we just didn’t speak. We were seeing this sadness. We were sad even though we had brought all this joy,” added Shapiro, executive director of Milwaukee’s Jewish Community Center. 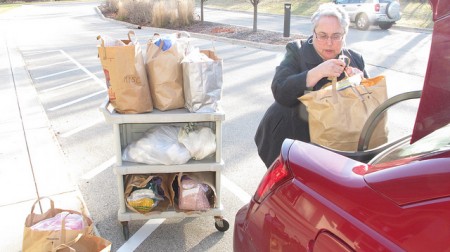 This is Shapiro’s fourth year playing Santa, and the ninth year that Tikkun Ha-Ir volunteers will bring gifts and a deli buffet dinner to the capacity crowd of about 60 women and families spending the holiday in temporary shelter at the center.

Donna Rongholt-Migan, the center’s executive director, remembers getting a phone call a decade ago from Tikkun Ha-Ir Executive Director Judy Baruch. “You know, we don’t celebrate Christmas. Is there something that we can do to support your organization over the Christmas holiday?” Baruch had said. Both organizations were new at the time and since then they have worked together to bring joy to people in crisis on Christmas Eve.

“Tikkun Ha-Ir brings all kinds of great presents and merriment. They have a Santa who puts on the red suit and says hello to the kids and takes their wishes and hands out gifts. It’s really a lot of fun,” Rongholt-Migan said.

Tikkun Ha-Ir, pronounced “Teekune hah-ear,” a Hebrew phrase that means “Repair the City,” is a nonprofit that gives Jewish individuals and organizations opportunities to volunteer, participate in social action and study Jewish teachings about social justice.

Among Tikkun Ha-Ir’s projects, one of the largest is the “Glean Machine.” The group collects gently used clothing, toys, books, games, household items, toiletries, bed linens and towels to replenish the stock of community organizations, shelters and agencies.

In addition, Tikkun Ha-Ir volunteers buy, prepare and serve a light dinner each month at the center. “It’s a lot of work,” said Danielle Costello, the center’s volunteer coordinator. Because the kitchen doesn’t have stoves or much other equipment, volunteers must prepare the food elsewhere and bring it ready to serve. Nevertheless, 45 to 50 volunteer groups provide dinners 365 days a year, Costello said. The center provides a simple breakfast and volunteers pack bag lunches for the residents, who are required to leave the center during the day.

The shelter, located at 845 N. Van Buren St., has the capacity to serve 32 women and eight families, according to Rongholt-Migan. “We have been full every night for forever. I anticipate having a full house on Christmas Eve,” she said.

A volunteer from another organization once told Baruch that the residents she met there on Christmas Day were stunned that somebody had made something for them by hand.

“They just couldn’t get over that somebody thought they were important enough and valuable enough to spend time knitting something for them. These gifts are so much more than just unwrapping something. It really validates that people —strangers, even, care about them,” Baruch said.