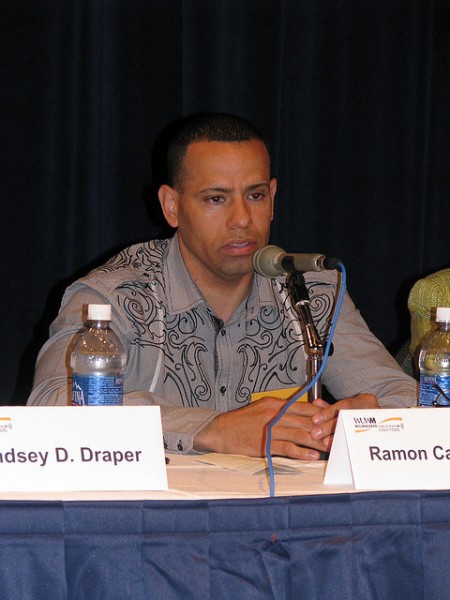 Ramon Candelaria, born and raised in Milwaukee, ran the streets on the South Side in the ’80s and early ’90s. One of his old stomping grounds was Clarke Square, bounded by West Pierce Street, West Greenfield Avenue, Cesar Chavez Drive and South Layton Boulevard.

“I used to run around this neighborhood breaking windows, and now I’m coming back to fix it,” Candelaria said.

Now director of the Clarke Square Neighborhood Initiative (CSNI), Candelaria is beginning by identifying foreclosed and boarded-up properties for redevelopment and seeking to bring new businesses to West Greenfield and West National avenues. He also is talking with Safe and Sound and Layton Boulevard West Neighbors to create a public safety partnership that encompasses Clarke Square and the surrounding neighborhoods.

Candelaria replaced Manni Marquez, the initiative’s first director. CSNI is now operating independently of Journey House, the original lead agency for Clarke Square. CSNI continues to be funded by the Zilber Neighborhood Initiative, a $50 million commitment by the Zilber Family Foundation to improve the quality of life in low-income city neighborhoods. Journey House CEO Michele Bria is a member of the newly formed CSNI council.

Candelaria has been working in the community more than 20 years, after Kathi Boyce gave him his first job at 14 as a youth worker at the Milwaukee Christian Center.

“She saw something in me that I didn’t see in myself,” Candelaria said.

Since then, he’s worked with youth at the Social Development Commission, as the community director at the Medical College of Wisconsin and the executive director of the Latino Community Center, among other positions.

He was selected by the new CSNI council to oversee and implement the nine-part Quality of Life plan for the neighborhood. Council president Tyna Rule said he was chosen to lead the initiative because of his intelligence (and) energy and because he realizes that the key to the initiative’s success is to make sure it is resident driven.

“Since he’s been on board the excitement throughout the community and residents has grown,” Rule said, adding that more people are interested in learning about the Quality of Life plan and how they can be involved in it.

Candelaria said the council is currently focused on outreach to the community and revisiting the plan, parts of which have been addressed. He is working with the council to tap into existing networks of people, while bringing in new opportunities to a neighborhood that people sometimes misperceive.

“I don’t want people to have the impression that this is a gang-infested poor neighborhood; this neighborhood has been challenged in areas but it’s also been blessed with people who’ve decided to live here who are educated, have great jobs and beautiful homes,” Candelaria said.

He said though there are many challenges, if everyone works together they can overcome them.

Minerva Santiago-Gomez, vice president of the council, said Candelaria is the right person to lead the effort. “I expect him to work with commitment (and) passion, and that he will help us showcase all the incredible things Clarke Square has to offer.”