You are here: Home / Home / Carousel / Gift of books benefits children ‘Next Door’
Share this... 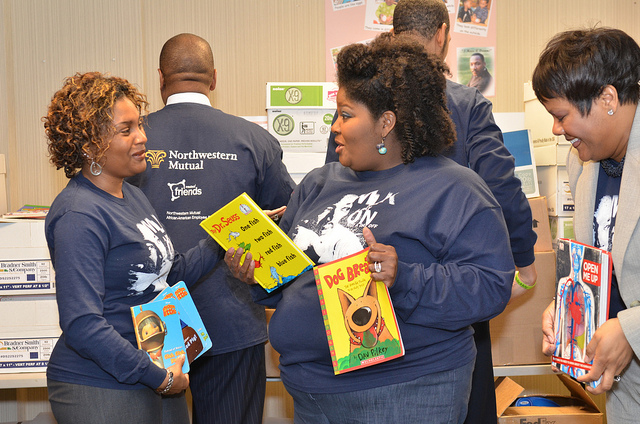 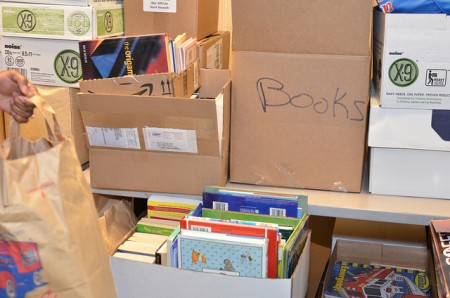 For two weeks in January, a group of Northwestern Mutual Life Insurance Company employees collected books to donate to the Next Door Foundation. On a cold day in February, volunteers unloaded the books, a gift in honor of Black History Month.

“It was a fantastic, joyous morning. We arrived with the truck and delivered the books and backpacks that were also donated. The children gave a wonderful performance, a song about George Washington Carver, who they have been studying as part of Black History Month,” said Derek Tyus, Northwestern Mutual’s director of private client services.

After they unpacked the books, the visitors were treated to a rap performance by young children participating in education programs at the foundation. And at least one ducked in to a “Read with Me” session, a regular event at which volunteers from all walks of life read to children.

The project was initiated by Northwestern Mutual’s African American Employee Resource Group. Now comprising about 200 members, the group was founded in 2011 as part of the company’s ongoing effort to support diversity and inclusiveness. It is open to employees of all races, said Tyus, the group’s treasurer.

During its first year, the group encouraged employees to volunteer throughout the city on the Martin Luther King Jr. Day of Service. This year it added the book drive, which took place at both of Northwestern Mutual’s campuses, in Franklin and downtown, over a two-week period in January.

Early childhood education is a major focus of the Next Door Foundation. It operates a Head Start program for 3-year-olds and a Head Start charter school for 4-year-olds in its building at 2545 N. 29th St.

“We are passionate about literacy here because that’s the key to succeeding in life,” said Carol Keintz, Next Door Foundation’s executive director. More than 700 volunteers come to read to children and 60,000-70,000 books are donated to us each year, Keintz added.

“Next Door Foundation is serving a need in the Metcalfe Park neighborhood where children have limited access to books,” said Tim Schaefer, Northwestern Mutual’s chief information officer and Next Door Foundation board member. Schaefer, who participated in the book delivery, noted that the neighborhood is “a book desert,” and said the children are given the opportunity to choose books to take home and own.

Helping families build home libraries is one of the organization’s goals, Keintz said. “Volunteers read to the kids and they get very excited about the stories and the books and that excitement spreads to the parents,” she added.