You are here: Home / Home / Carousel / Ending residency requirements riles up south side leaders
Share this... 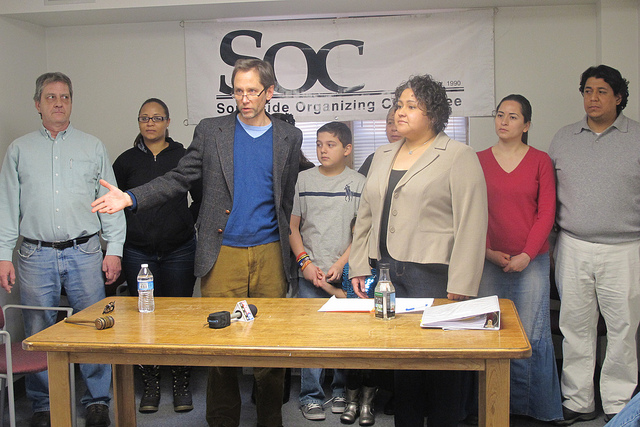 Steve Fendt, executive director of the SOC, gathered with Rep. JoCasta Zamarippa and members of the community to denounce a measure to end residency requirements for city workers. (Photo by Edgar Mendez)

South Side community leaders and citizens are riled up over a provision in Gov. Scott Walker’s budget that would end the residency requirement for city workers statewide.

State Rep. JoCasta Zamarippa (D-8th) and Steve Fendt, executive director of the Southside Organizing Committee (SOC), said ending the residency requirement in Milwaukee not only will affect the quality of services, but will harm the tax base if middle-class city employees move elsewhere.

Zamarippa said she is upset with the way Walker handled the issue. Including repeal of the residency requirement in the budget bill rather than as a separate item, makes it more likely to pass, Zamarippa said. She noted that it would be difficult to attain Republican support to remove the requirement from the budget.

“It’s always been a stand-alone item and it’s never passed; (Walker) made it a very unfair fight, a political issue,” said Zamarippa. 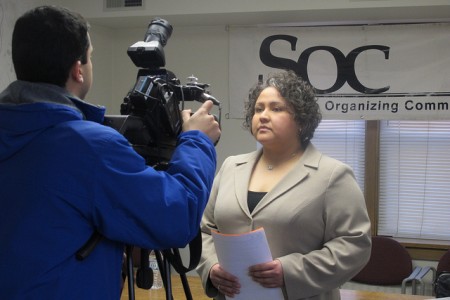 Walker did not mention the provision ending the residency requirement during his biennial budget speech Feb. 20, but has long been a vocal opponent of the requirement.  The governor has been quoted saying that city employees should not be forced to live in the city.

Fendt argued that city jobs pay good wages and have good pensions, and that if people don’t want to live in the city they don’t have the right to a city job.

“There are plenty of applicants for city jobs; we don’t have to hire people who don’t want to be here,” Fendt said.

Fendt, Zamarippa and other community members attended a press conference at the SOC headquarters, 1300 S. Layton Blvd. in Clarke Square to denounce Walker’s plan. They stated that city workers residing in the city — especially police officers — makes neighborhoods safer, builds trust between law enforcement and the community and improves the quality of services.

“I want people from Milwaukee who know the intricacies of the neighborhood to police Milwaukee,” said David Janis, who moved to the city from the suburbs five years ago. He said he’s proud to live in Milwaukee and feels safer knowing that police are working in their own city.

Fendt said ending the residency requirement undermines Milwaukee and especially older neighborhoods such as those on the south side.

“The fact that they (city workers) keep on asking about leaving is disconcerting; I mean, do you really want to be with us?” Fendt asked.

Fendt noted that he plans to reach out to other local organizations to help fight the measure.

Zamarippa added that she hopes the provision fails in the court of public opinion. Referring to city employees, she said, “We need them here to help us continue to build a solid middle class.”