You are here: Home / News / Arts and Recreation / Brothers return to Riverwest to help children like them
Share this... 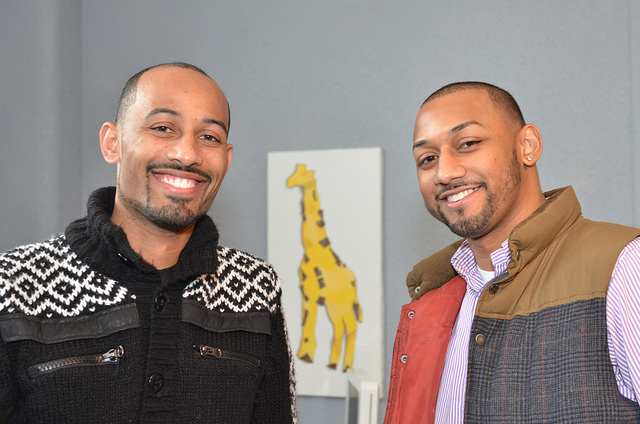 Darren and Vedale Hill were just 7 and 5 years old when their mother and father split up. After that, Vedale calculates, they, their mother and younger sister moved about 50 times, mostly to relatives’ homes within the Riverwest neighborhood.

“We were the poorest of the poor,” Vedale said. “We had the worst clothes and often didn’t have money for food and rent.”

But the brothers always talked things through and that, according to Vedale, helped them develop a strong bond as well as good analytical and problem-solving skills. Each has taken his turn encouraging the other through difficult times. “Quite often we’d sit in a house with no electricity and all we had was communication between [us].”

Now 26 and 24, the Hill brothers have largely overcome the circumstances of their childhoods. Darren is earning high grades at the University of Wisconsin-Milwaukee where he is on track to graduate next year with a bachelor’s in education policy. Vedale graduated from the Milwaukee Institute of Art and Design in 2011, the first in his family to finish college.

They are now pursuing their dream of enriching the lives and futures of neighborhood children. In late fall, the brothers established a nonprofit arts organization for children, and are renovating a 7,400-square-foot space in Riverwest to house it. By late March, they plan to open Jazale’s Art Studio, 731 E. Center St., where they will offer children ages 5 to 18 free art, music production and dance programming, as well as academic tutoring and help with job and college applications.

But most important to Darren and Vedale, they will serve as role models. Neighborhood children will see that it is possible for people like them to attain higher education and pursue any dream.

Many central city children have low expectations and goals, just like he did, Vedale said. He and Darren want to show them the world outside of the neighborhood and the possibilities that are out there. “I want to make these children really understand that if you want to go to Mars, let’s find the best route and get there.”

The brothers both count COA Youth & Family Centers among the critical influences that contributed to their success.

Youth Development Director Kari Nervig has been at COA for 15 years and has known the Hill brothers since they first started participating there as preschoolers.

“As an eighth-grader, the staff noticed that Darren was struggling academically and they challenged him. Something clicked for him and he really turned it around. He was our first real success,” Nervig said.

“In many ways, these two outstanding young men are shining examples of what we want to see every day with the thousands of young people participating in our after-school programs at COA. My own experience, having been a prosecutor for 29 years, is seeing so many kids who took another pathway and ended up getting in all sorts of trouble, or worse,” said COA Executive Director Tom Schneider.

Darren started college in mechanical engineering at the University of Wisconsin-Madison with a full scholarship and an internship at GE Medical. A family tragedy brought him back to Milwaukee at the end of his sophomore year and it took him a few years to regroup and go back to college. By that time he realized that he was more suited for education and nonprofit management because of his passion for his community, he said.

“[Vedale] was on a path that wasn’t the best. His school shut down and he went to Milwaukee High School for the Arts and his skills flourished. I saw he had a gift. I saw the change in his focus. I know that art can do that for so many people,” Darren said.

“Art is something that I believe is transcendent. It gives life meaning. It’s something beyond the task. It’s beyond making money,” he added.

Vedale’s artistic talents were first nurtured at COA and ultimately, COA became the model for the brothers’ dream of bringing artistic and educational enrichment to children like themselves.

“I love the way [COA’s] business ran. It was no cost to the families. It really helped a large number of kids do activities such as camping, basketball, baseball, football, homework help, computer labs, art projects,” Vedale said.

COA allowed him to head a mural project and that gave him confidence to teach art, mostly to at-risk youth. For the past six years Vedale has helped support his fiancée and two young children with money earned teaching art programs at COA, Northcott Neighborhood House, Holton Youth + Family Center, COA Goldin Center and Arts @ Large, he said.

Another positive influence on the Hill brothers, according to Darren, was their mother’s older brother, Richard Fabian. Fabian has no children of his own.

“He saw all of us without a father and he tried his best to step in. He was the enforcer. He took an interest and that was essential to my success,” Darren added.

Jazale’s Art Studio, named after Vedale’s 5-year-old daughter, is being funded through private donations and grants, as well as the Hill brothers’ own earnings from other work. To date, they have received one significant donation and one grant as well as many small donations from family, friends and other supporters.

Harway said she has been excited about the art project for a long time, adding, “Vedale and Darren are so smart and articulate… [They] are doing something really original and they are uniquely situated to do it.”