Chestnut founded CHILL, which stands for “Creating Hope I Love Life,” to create awareness about the impact of violence, and to help mold young leaders on the street. He said that young people, especially those growing up amid violence, need structure and positivity in their lives.

“They need to know the importance of being honest and not tearing your community down for a dollar,” Chestnut said.

The “Life Bulbs” shine into the night, letting criminals know they’re stepping into zones residents have declared violence-free, according to Chestnut.

Violence has touched his life too many times to count, he said. Born in Milwaukee and raised in Alabama until he made his way back, Chestnut has lost friends such as Milwaukee R & B singer La La Brown, whose 2007 murder remains unsolved, and Lavelle Felton, the professional basketball player shot and killed in 2009 at a north side gas station.

He’s in neighborhoods hit hard by violence on a regular basis promoting his message, according to Gracelyn Wilson, neighborhood strategic planning coordinator for the Northwest Side Community Development Corp. (NWSCDC). 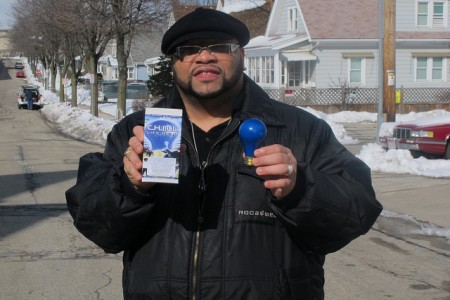 “He’s been at the forefront of everything they’re trying to do to promote non-violence,” including peace marches, health fairs, block watches and more, Wilson said.

NWSCDC has purchased numerous CHILL bulbs and distributed them in neighborhoods such as Amani and Franklin Heights, and also near St. Matthews Church, 2944 N. 9th St.

“Parishioners and elders came out and we put up bulbs until 9 p.m. in some of the roughest neighborhoods in the city,” Wilson recalled.

She explained that the blue lights promote peace by deterring criminals who look at them and figure something must be going on so they shouldn’t be in the neighborhood.

Milwaukee Police Department District 5 Captain Terrence Gordon said his department has purchased several bulbs but asked that community members place them in a lamp in the window instead of on their porch.

“We don’t want residents to replace a primary light source but we do encourage them to display the lights in the window as a sign of non-violence and solidarity among residents,” Gordon said.

Chestnut says the CHILL Program has provided more than 5,000 bulbs, most donated, to the community.

In addition to the Life Bulb initiative, CHILL raises money to purchase bedding and other items to donate to the Sojourner Truth House, fund scholarships and host community health fairs and other events.

Also a music producer, Chestnut is working on a “No Violence More Peace” campaign in which Milwaukee-area artists will visit different schools, neighborhoods and even cities plagued by violence to spread their message of peace through music.

The non-profit receives support from various local businesses and also sells the Life Bulbs and other CHILL merchandise online to raise funds. However Chestnut said that running programming and providing resources is not cheap, and it’s difficult to gain the needed sponsorships and support in the areas hardest hit by violence. Still, he holds fundraisers and eagerly spreads his message of peace to anyone who will listen.

“People don’t realize the power of your voice and using it to reach people,” he said.

“I want people on the block to see the organization as a neighborhood hub for those in need, for those who want to see violence end.”