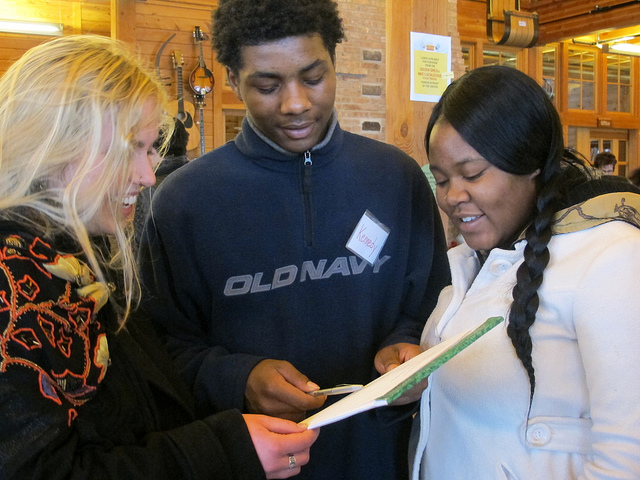 A CSA is a partnership between a farmer and a group of supporters who invest in shares of the farm’s production in exchange for regular deliveries of fresh food throughout the growing season, according to Anne Steinberg, an Urban Ecology Center volunteer involved in organizing the event. In addition to proving business success, the CSAs at the Open House are required to use “organic or sustainable growing practices,” she said.

“It’s not just local, it’s city-sourced. It’s the true meaning of CSA – the immediate community is supporting its own food system,” DeMarsh reflected. “We’re changing the perspective of what local really is.”

The youth deliver shares to a drop-off site by bicycle, thereby “limiting the carbon footprint,” DeMarsh said. Kennedy Paskel, 16, a returning farmer and sophomore at Vincent High School, 7501 N. Granville Rd., agreed that this was a selling point of his business, as well as “good exercise.”

Each young farmer oversees one or two plots, depending upon experience, and has one customer per plot. Each plot produces the equivalent of a traditional CSA’s half-share and costs $350. A new agreement with Milwaukee Area Time Exchange makes it possible for customers to pay for a portion of their share using time credits earned through hours of service.

Steinberg emphasized the role of CSAs in building relationships between farmers and customers, noting, “It’s really personal with the Young Farmers because they only have one (or two) customer(s) and the customer has a say in what they’re growing.” 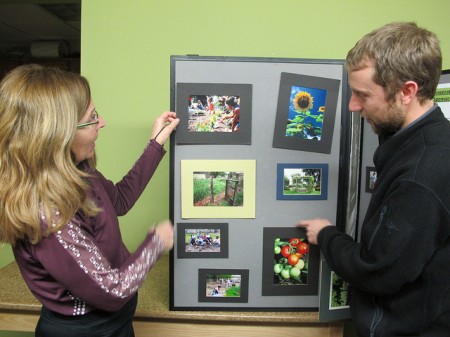 Mary Beth Driscoll and Nick DeMarsh prepare a display board for the Local Farmer Open House. (Photo by Jennifer Reinke)

Customers choose from a menu of options based on companion planting – the notion that certain plants grow well with others and share space well, said DeMarsh. There is some flexibility within that scheme.

Young Farmers also is reaching out to restaurants. Last season, Centro Café, 808 E. Center St., bought a share, which consisted of basil and nasturtium, a spicy edible flower. At the end of the season the young farmers were invited to eat dinner there and “taste the fruits of their labor,” said Centro Café Head Chef A.J. Dixon. She said she was motivated to purchase a share because it was good for the youth of the neighborhoods. “It teaches them urban farming and gives them something to do during the summer. It teaches them leadership, responsibility — and growing food is a skill set (people) should know how to do.”

Dixon reported that she was “absolutely a satisfied customer.” Young Farmers accommodated the restaurant’s need for produce to be dropped off twice a week and, she said, “I could tell they were taking very good care and being very attentive to the job they were doing – probably better than most CSAs. The stuff came really clean and it was really beautiful basil.”

“Young Farmers puts ownership of the business in the hands of the youth…the business’ successes and failures are dependent upon their effort,” DeMarsh said. Proceeds from the sale of CSA shares go to the participants.

After high school, Paskel plans to serve in the Navy and then open his own barbershop or restaurant. “I like something being under my control, something I’m in charge of,” he said. He credits Young Farmers with teaching him how to store fresh foods, what they taste like, and where they come from. Even though professional farming isn’t in his plans, he said, “I think it’s something I’ll stick to. I’ll have my own personal garden.”

Although the Young Farmers CSA is only in its second season, Paskel and other participants are building on years of farming experience. Some of the teens had participated in Silver Spring Neighborhood Center’s garden education programs for as many as three years before joining the CSA. DeMarsh had worked with them as a Growing Power outreach employee.

Shawnice Marlow, 16, a returning participant and junior at Morse-Marshall High School, 4141 N. 64th St., said that over the years she and Paskel have learned how to compost with worms, fertilize with worm castings, maintain garden beds, plant, water and harvest. Marlow and Paskel said they’re looking forward to taking on a leadership role and mentoring new recruits this season.

Like other CSA farmers the Young Farmers participants eat the food they grow. Their produce tastes “way fresher” than store-bought food, said Marlow, who plans to become a pediatrician. Learning where “real food comes from” and its impact on health will influence her work, she said. “If my pediatrician job doesn’t turn out like I’m expecting, I’ll fall back on farming,” added Marlow.

After a serving as its fiscal agent last season, Groundwork has taken on Young Farmers as one of its programs. This will “give it the support and structure it needs to do project planning,” said Driscoll. “It dovetailed with our mission so perfectly,” she said. “It [reaches] young people from neighborhoods in need. …Plus we had been wanting to have a project with an entrepreneurial mission.”

Steinberg said one reason the Young Farmers were invited was that “so many people don’t know the good things going on (in the central city) and have negative perceptions. (They’re) sharing their story with people who (may not) know.”

But, she added, “We mostly invited them to succeed and find customers like all the other CSAs.”