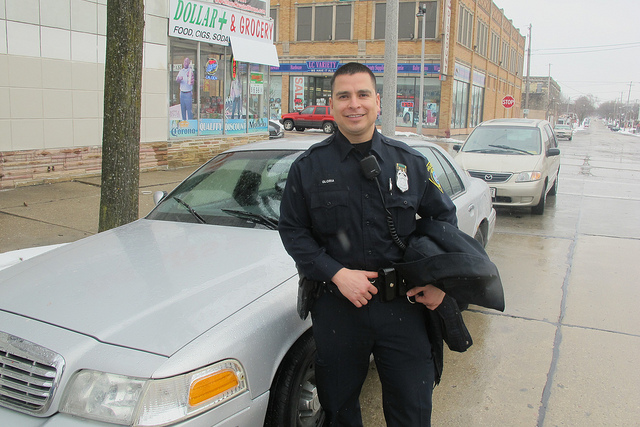 A mother, distraught and mentally unstable waits at the Milwaukee Intermodal Station, 433 W. St. Paul Ave., preparing to hop on a train or bus and run away from her kids. Community Liaison Officer Jesus Gloria stays on the phone with the distressed mother until a mobile crisis unit can take her to get help.

Gloria, 36, works in the Milwaukee Police Department’s District 2. He sometimes deals with the worst of the worst situations. But he also sees the best of the best, and when things go wrong, he is in a position to make them better.

Gloria recently was named Community Liaison Officer  (CLO) of the Year by the Milwaukee Police Department during its annual Crime Prevention Awards Ceremony. Gloria’s work in the community includes presentations about bullying and drugs at schools and organizing neighborhood cleanups and graffiti removal projects.

These and other tasks take him block by block across his district. An important component of his job entails getting to know residents and helping them solve problems. Gloria’s biggest challenge is that there is not enough time to help everyone.

“I’m not able to answer the phone or to be there every time they need me,” said Gloria, who added that in a recent two-day period his voicemail had filled and he’d accumulated 161 emails. He says that with a smile, because it means people are reaching out to him. 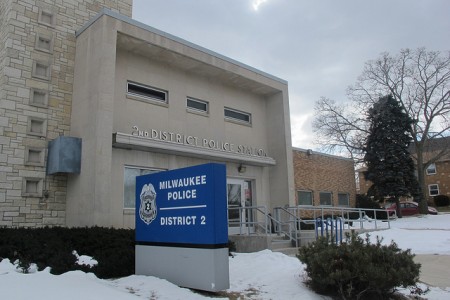 Gloria, born in San Luis Potosi, Mexico, became the MPD’s first fully bilingual CLO in 2006 after working the street beat for two years. It’s Gloria’s job to be the “living, breathing personification of the MPD,” according to a statement by Alderman Bob Donovan, who serves parts of the same predominately Hispanic area of the city.

Gloria said his main role is crime prevention. He also connects residents with community resources and organizations. Gloria’s community policing reflects Chief Edward Flynn’s philosophy that the way to fight crime is by increasing collaboration among residents, community organizations and the police.

But community involvement and communication among neighbors is lacking, according to Paul Grippe, president of the District 2 community block watch council.

“In today’s society both parents are working and when they get home they lock the door; they’re not interactive with their neighbors,” Grippe said.

Grippe attends meetings and walks the streets with Gloria, trying to sign up residents as block watch captains or members. Grippe said he and Gloria are trying to change residents’ attitudes toward block watches and to get them to be “true neighbors,” like when he was a kid.

“I grew up on Pierce Street, and if I did something on Sixth Street, somebody would pick up the phone and my mom would know about it by the time I got home,” Grippe said.

Gloria’s charisma helps him to bridge the communication gap, according to Grippe.

“He can really bond with residents,” he noted.

Gloria said that speaking the language overcomes some barriers, but he still struggles to connect with the “unreachables.” He describes them as parents who work two jobs and don’t have time to attend meetings to learn about the work MPD is doing and about community resources. Bringing them to the table is critical to preventing crime, according to Gloria.

Gloria sees neighborhoods such as Clarke Square rising because of community involvement. “I see the changes; I hear from neighbors how years ago it used to be worse there,” Gloria said, referring to longtime residents.

Minerva Santiago-Gomez, who ran the Weed and Seed program in 2006 when Gloria was CLO in District 6, said he was a perfect fit to work with Clarke Square residents. Weed and Seed, an anti-crime initiative that targets high crime neighborhoods across the country, is no longer funded in Clarke Square.

“He understood and was very sensitive to the needs of the community,” said Santiago-Gomez.

She met Gloria when he was a beat cop fresh out of the academy. She also worked with him on a program called “Project Payback,” in which offenders were brought into Clarke Square to remove graffiti and beautify the neighborhood. She considers him a role model, especially for the immigrant and Latino population on the south side.

“He’s an example of a person who emigrated from Mexico, followed his dreams and achieved them,” said Santiago-Gomez.

Gloria’s job is challenging and he knows that not every situation will end positively, but he says he’s gratified by working in the community on a daily basis, helping protect and improve the lives of residents.

To do it, he needs help, Gloria said. “The key is for us to come together and work as one.”