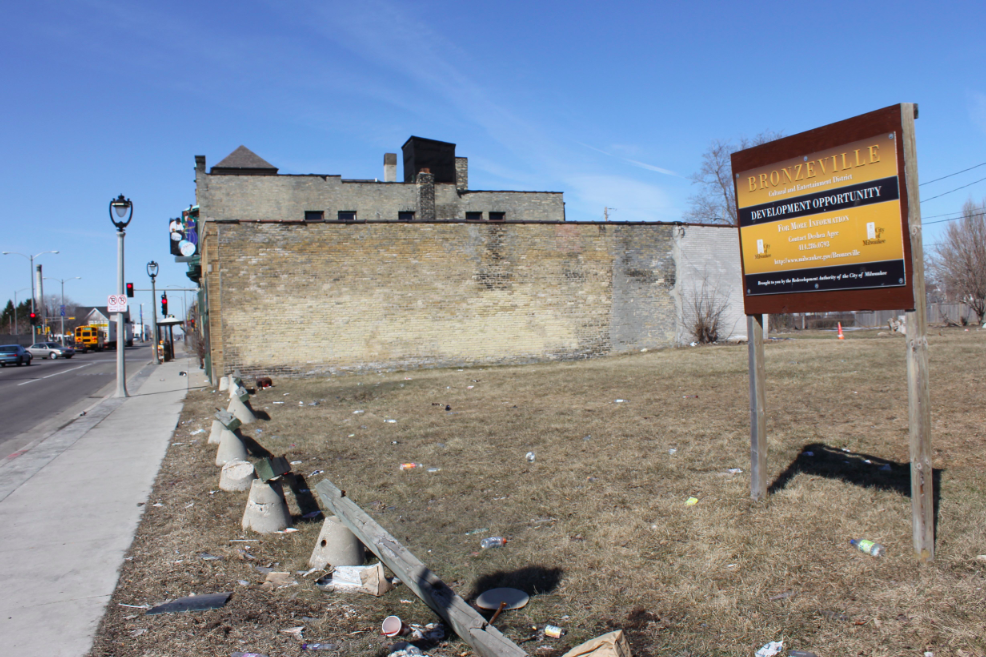 The city has offered up 230 feet of frontage on West North Avenue for
redevelopment, but no bids have been submitted for purchasing the property. (Photo by Mark Doremus)

The city of Milwaukee is redoubling its efforts to create an African American cultural and entertainment district along North Avenue between Martin Luther King Jr. Drive and Seventh Street.

Recently the city hired a consultant to interview community stakeholders and come up with a Bronzeville implementation plan. The consultant, Genyne Edwards of WOO Connections, plans to meet with stakeholders this month. She hopes to identify business and community leaders who are willing to lend active support to the redevelopment effort. Edwards has set a mid-summer deadline for delivering a list of suggested action steps to help bring Bronzeville to life.

WOO Connections has begun interviews with key stakeholders and initial themes are emerging, according to Edwards. “There needs to be a development plan for businesses; people have talked about how we might address the vacant and blighted buildings along the North Avenue corridor; they want to see the planning include inter-generational leaders; and they want us to benchmark other cities that have had past successes,” she said.

Meanwhile, the Department of City Development is trying to secure the vacant Garfield Elementary School on Fourth Street, just next door to the boarded-up Black Holocaust Museum, for an African American cultural center that would be an essential component of the new Bronzeville.  City officials hope the museum might be able to reopen in the old Garfield School but the building, which was built in 1887, would require extensive, and expensive, renovation before it could be reopened. So far the city has not yet found an organization that can restore and run the proposed facility.

“All of us would like to see the cultural center tomorrow,” remarked Ralph Hollmon, who chairs the Advisory Committee, during a meeting at the end of March, “but there are some tremendous costs to bringing a building of this age up to date.” Hollmon is president of the Milwaukee Urban League.

Plans to revitalize the neighborhood were formulated by the Department of City Development in March 2005. The idea at the time was to revive the spirit of Milwaukee’s old Bronzeville neighborhood in a new location. The original Bronzeville on Walnut Street was the hub of the city’s African American community, but was bulldozed to make way for urban renewal projects and the Park East Freeway in the 1960s.

Plans for the new Bronzeville included restaurants, taverns, theaters, museums and artists’ studios that would recreate the nightlife and business vitality of the old neighborhood. America’s Black Holocaust Museum, which at one time was drawing 25,000 visitors a year, was to be the centerpiece of the new arts and entertainment district. However, the museum closed in 2008, depriving the area of a crucial tourist attraction. Aside from renovation of a classic building on the corner of Seventh Street and North Avenue, the redevelopment district has not attracted much in the way of new business enterprises.

Alderwoman Milele Coggs, who represents the district that encompasses the Bronzeville project, added that the final choice of a new location would remain with the museum’s board of directors.

“I wouldn’t want to undermine their efforts by suggesting specifically where they should locate,” Coggs stated.  “I have always said I hope to see the return of the museum and hope that return is in Bronzeville somewhere.”

Last year, the Department of City Development issued a request for proposal (RFP) inviting private companies to buy and develop 230 feet of frontage on North Avenue between Sixth and Seventh streets, including a boarded-up brick building dating from 1925. However, there were no takers for the property.

The department expects to issue another RFP for a parcel south of North Avenue and west of Seventh Street, right next to the I-43 north-south freeway. However, Clear Channel Outdoor has a huge billboard on a corner of the site, and the company so far hasn’t agreed to let its corner be included in the parcel to be offered up for redevelopment.

The city has been offering residential lots for one dollar in the area for people who want to build and occupy new homes in the Bronzeville redevelopment zone.  As of last fall, the city had sold six of the bargain home sites. According to Deshea Agee of the Department of City Development, there have been no additional lots sold since then.

An online survey to identify the types of cultural and entertainment ventures that would attract visitors to the Bronzeville redevelopment zone is still open and the public is invited to submit input at: https://www.surveymonkey.com/s/Bronzeville414WI