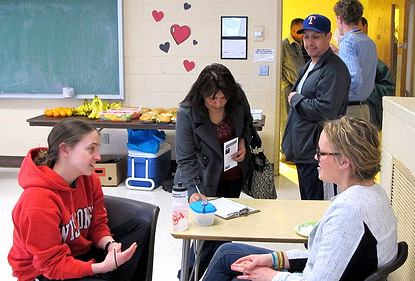 Homeowners Rosalia and Eusebio Salazar sign in at the TIN information meeting at Kosciusko Community Center. (Photo by Andrea Waxman)

Representatives of the city and the Sixteenth Street Community Health Centers are urging property owners in the Harrison Avenue Targeted Investment Neighborhood to take advantage of partially forgivable, zero-interest loans to rehabilitate their homes.

Some residents in the Harrison Avenue TIN are reluctant to apply for home rehabilitation loans because they are undocumented immigrants, although that does not automatically exclude them, according to Iris Gonzalez, community engagement specialist for the neighborhood’s partner organization, Sixteenth Street Community Health Centers.

Undocumented immigrants may be eligible for the loans, which are made from federal HOME funds, but they are not eligible to receive Social Security numbers, Gonzalez noted. Instead, the Internal Revenue Service issues Individual Taxpayer Identification Numbers (ITINs) for the purpose of filing income taxes. This and a lack of familiarity with the system can make the loan process complicated.

“I think because of the documentation of income and issues with ITINs … we saw some people who were either fearful to move ahead with an application or who just were not going to be strong candidates,” Gonzalez said. But Gonzalez and her team can assist.

“We can help guide them and … try to make a strong application that will show that they have income and they can qualify. Of course, we can’t work magic or lie,” Gonzalez said.

This is the last of three years during which a section of the Lincoln Village neighborhood, bounded by 6th and 10th streets on the east and west and Arthur and Cleveland avenues on the north and south, is designated as a TIN. The area includes about 400 households. 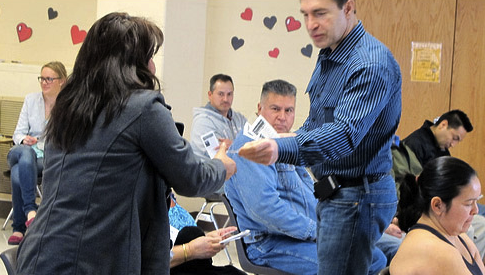 So far, nine property owners have applied for loans. Of those, one homeowner qualified and has completed a rehabilitation project. Two rental property owners are in the process of applying for loans. Six owners applied and failed to qualify, each for a unique reason. For example, one person had already received assistance through the program and another didn’t have complete ownership of the property, according to Sam Leichtling, program director of the City of Milwaukee’s Neighborhood Improvement Development Corporation (NIDC).

Gonzalez said that the Sixteenth Street Community Health Centers and NIDC are trying to encourage more residents and investors to take advantage of the favorable loan terms and technical expertise the city is making available to improve their houses and rental properties.

They met recently with interested residents and property owners at Kosciuszko Community Center, 2201 S. 7th St. In separate English and Spanish-language sessions, NIDC Community Outreach Liaison Vanessa Llanas and Sixteenth Street Community Health Centers staff gave a presentation and a team of experts answered questions about the loan application process, income guidelines, what work can be done, and who qualifies, among other issues.

The meeting was the fifth of its kind in the area, according to Gonzalez. “(After each meeting,) we felt the word-of-mouth effect and we had a lot of referrals of people who had learned about the resources … and then passed it on to a neighbor,” she said.

Leichtling noted that the city may extend the TIN designation for a fourth year if TINs get off to a slow start and then see increased activity toward the end of the third year.

Whether residents who attend the meetings can take advantage of the loans or not, Gonzalez wants them to know that the City of Milwaukee, Sixteenth Street Community Health Centers and other community groups are interested in hearing from them about what they need.

She said, “We want this to be a vibrant community that has improvement (and) dedicated resources, and for (the residents) to see us as a constant resource and a constant place to seek out assistance.”