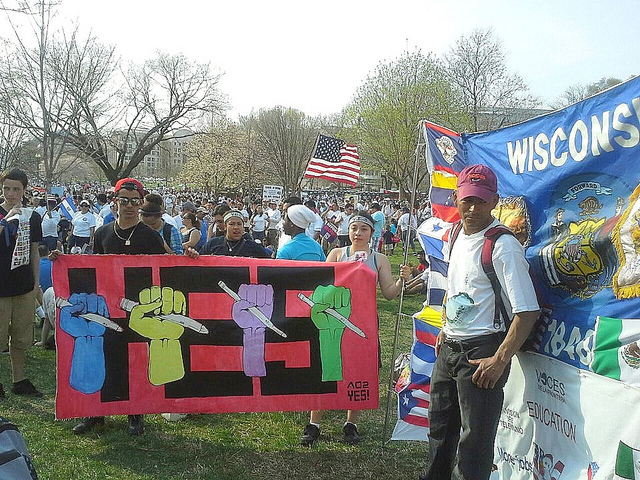 More than 200 Wisconsinites who traveled by bus to Washington, D.C., to take part in a massive immigration reform rally returned home on Thursday with a sense of optimism that the fruits of their labor will result in a path to citizenship for millions.

Joe Shansky, spokesperson for Milwaukee’s Voces de la Frontera, was one of the 245 travelers from Milwaukee and southeast Wisconsin. Shansky said the momentum has come to a crescendo for immigration reform that will consist of an accessible, affordable path to citizenship for 11 million undocumented people in the United States.

“It’s pretty clear that we are at a critical moment right now,” said a raspy Shansky during a phone interview Wednesday night from a bus heading out of Washington after the National Rally for Citizenship.

“It was a totally successful trip,” he added. 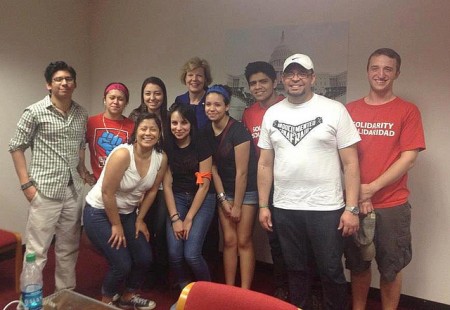 The group spent Wednesday lobbying for legislation that provides a pathway to citizenship and ending “the devastating separation of families through deportations” during meetings with Rep. Paul Ryan’s and Sen. Ron Johnson’s staff members. About eight members of the group also met personally with Sen. Tammy Baldwin of Wisconsin.

“She said that she will make a public statement supporting fair immigration reform,” said Jessy Lopez, an undocumented 17-year-old who met with Baldwin.  “I am really hopeful. I feel our meeting was really good and we accomplished a lot with her.”

Lopez, who attends Carmen High School of Science and Technology, 1712 S. 32nd St. , told Baldwin about her struggles as an undocumented teenager: unable to get a job, internship, college financial aid or a driver’s license.

“She said that our story-telling is the number one tool for people to see our struggles,” Lopez added.

National media outlets reported on Wednesday that a bipartisan agreement on immigration reform had been reached in the Senate. The agreement includes tightening of border security and amnesty for undocumented people who have lived in the United States for 10 years.

The group also took part in the rally on the west lawn of the Capitol, where thousands from around the country demonstrated.

“There was a fever pitch. It was clear that people were very, very happy to be uniting,” Shansky said of the rally. “People have been uniting locally for a long time, but to be able to unite on this level is really unprecedented.”

A demonstration, in front of the Immigration and Customs Enforcement offices in Washington, called for the end of deportation.

“Myself included, there were many people moved to the point of tears,” said Francisca Meraz, a 19-year-old Milwaukee native who attends Marquette University. “It was very powerful.”

Meraz, whose father became a United State citizen in 2000, described her extended family as “mixed-status.”

“It’s been really difficult with family members passing away in Mexico and family not being able to go and parents never getting to meet their grandchildren,” Meraz said. Immigration reform “would make a huge difference in the dynamics of our lives.”

Voces de la Frontera, 1027 S. 5th St., has been advocating for immigrant rights since 1998. Shansky said the trip to the nation’s capital was the result of a grassroots mobilization focusing on educating the community on immigration reform legislation during the last few months. The effort, he said, will continue until reform legislation is passed.

“We need to continue to put pressure on our elected officials,” Shansky said.