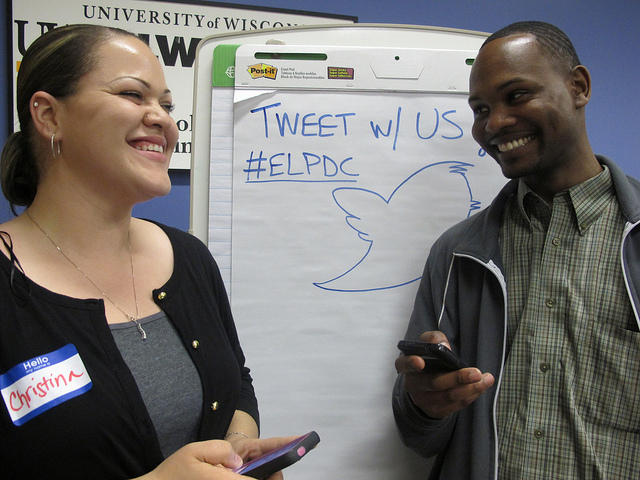 Public Allies Christina Felski and Corey Tucker practice Tweeting using a hashtag (#), a skill they honed in a social media workshop at the conference. (Photo by Jennifer Reinke)

After four years of work in the nonprofit sector, Public Allies Milwaukee Fellow and Alumni Outreach Coordinator Alisha Klapps Balistreri said she was burnt out and knew she was not alone.

“So often, nonprofit professionals are giving to others and seldom pour into themselves,” she said.

Tasked with engaging Public Allies Milwaukee alumni, Klapps Balistreri was determined to give nonprofit professionals an opportunity to invest in themselves. What emerged was the first-ever Evolving Leaders: Professional Development Conference for current Public Allies, alumni and other community workers.

Public Allies is a national organization that seeks to develop new leadership to strengthen communities, nonprofits and civic participation.

“By practicing self-care and investing in myself, I have better energy so I’m better able to serve others,” Klapps Balistreri said.

The conference also provided a strategy for involving the diverse network of alumni from the Milwaukee program, which is approaching its 20-year anniversary said Nikotris Perkins, Public Allies Milwaukee program manager and director of recruitment and alumni engagement.

Klapps Balistreri said this was the first Public Allies alumni conference in the country.

It was organized to tap into the assets of Public Allies Milwaukee alumni and respond to areas of growth nonprofit leaders want to expand on, she said. Executive directors, founders and public officials are now counted among the organization’s alumni, Perkins noted. Alumni facilitated five of the day’s six workshops, and three of five panelists were alumni of the program. 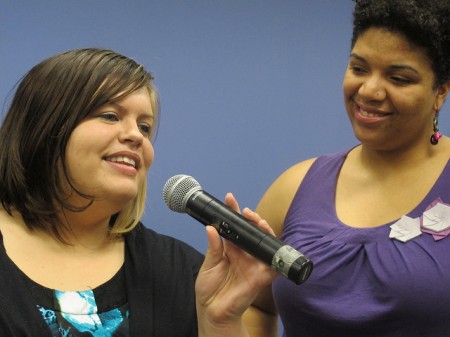 “Reciprocal is the way to describe the relationship we want to foster with our alumni,” said Public Allies Milwaukee Executive Director LG Shanklin-Flowers.

Klapps Balistreri counted 60 people at the conference. A quarter of the participants were Public Allies alumni and 10 percent were current Allies. The remaining participants were members of the Young Nonprofit Professionals Network (YNPN) Greater Milwaukee Chapter and other nonprofit professionals.

“The participants are making a statement about the need for professional development as young leaders and about their commitment to their own development and belief in life-long learning, which is a core value of Public Allies,” said Shanklin-Flowers.

“The panel is talking about a hot topic in Milwaukee,” Perkins said. Opportunity youth, or disconnected youth, are the approximately 6.7 million Americans aged 16 – 24 who are neither in school nor working.

“Public Allies’ main focus is targeting young adults,” Klapps Balistreri said. About one-third of the participants in each Public Allies Milwaukee class are between the ages of 18 – 24. “To expand on the importance of engaging young people is at the forefront of our minds,” she added.

Julio Guerrero, a Public Allies Milwaukee alumnus in his final semester at UW-Milwaukee, attended the conference and found it to be different from previous alumni engagement efforts.

Rather than just asking alumni for contributions of time and money, Guerrero appreciated the “effort to put some resources into giving back to the alumni community,” he said.

Elisabeth Vink, program specialist with the International Foundation for Functional Gastrointestinal Disorders attended through the YNPN and was exposed to Public Allies for the first time.

“I’m still relatively new to the city so it was great to be able to network with people who are doing nonprofit and community service,” she said. “It’s nice to go to a first annual (event) that is going to have a second.” Next year’s Evolving Leaders Conference will take place March 22.

“It was helpful to know that it’s normal to question what your role is…but you can still make an impact and you’re still valuable despite that uncertainty,” he explained.

Current Public Allies Christina Felski and Corey Tucker said a key take-away for them was the importance of identity and personal branding.

“I don’t know how to help the community unless I know who I am,” Felski said. “It’s about knowing what I want and who I am so I can use those tools to give back.”

“I have a vested interest in making sure Public Allies continues to thrive and engage young professionals in this community,” Bowen said. I’m glad I’m able to contribute to that as an alumnus who has experienced the impact of what Public Allies can do…I was honored to be on that panel with distinguished guests who are doing great things in the community.”

The conference was held at the University of Wisconsin Milwaukee School of Continuing Education, 161 W. Wisconsin Ave., in collaboration with BoardStar and YNPN.