You are here: Home / News / Arts and Recreation / Art picks up ‘STEAM’ at TEDxHarambee
Share this... 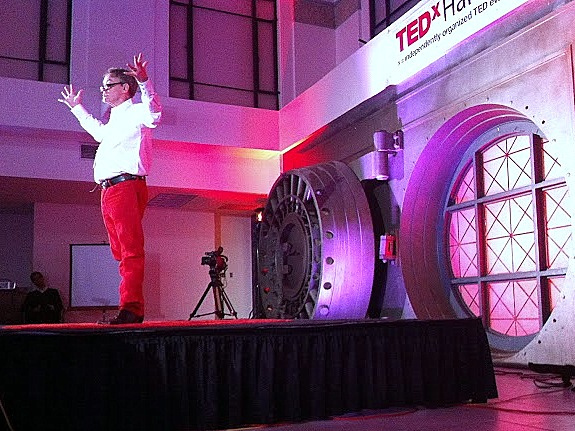 TEDxHarambee brought a cross-section of area leaders in the academic, arts and technology fields together to listen to speakers discuss STEAM —Science, Technology, Engineering, Arts and Music. The STEAM approach places the arts at the center of the problem-solving and innovation processes.

“Teaching students science is not going to teach them how to innovate,” said Sherri Dodd, director of educational technology at Milwaukee Montessori School during her presentation.

“Incorporating the arts in to science, technology, engineering and math will give students that creativity and provide them (with) skills that will allow them to be innovators,” she added.

John Kowalczyk, 25, a local artist, said he attended the event because of his interest in applications for art in science and technology.

“Being an artist, I am so immersed in my creativity, but I like to see connections from art to science. It helps me broaden my reach. It’s about finding a purpose for art,” said Kowalczyk, who teaches art to adults at Splash Studio, a painting bar in the Third Ward.

The audience was limited to 100 guests who listened intently to the 18-minute presentations by 11 speakers.

Marvin Pope, the publisher of BU-Magazine, said he enjoyed the format because it treated him to an in-depth glimpse of what drives each of the speakers. 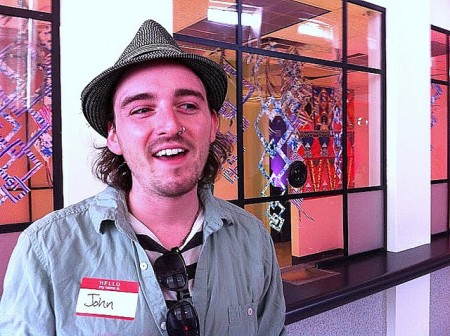 Attendee John Kowalczyk is interested in the connection between art and science. (Photo by Brendan O’Brien)

“It’s interesting to hear every person speak about their passions,” said Pope, whose online publication focusing on profiles of people including artists.

Although the presentations at times revolved around topics such as poverty and human rights violations, the mood was light among the speakers and attendees.

Some attendees jotted in notebooks, while others tapped on handheld devices to record the event’s most memorable and inspiring concepts and quotes.

“Imagine the world we live in if we spent more time imagining the world we could live in,” said speaker Nathaniel Stern. Stern and co-speaker Ilya Avdeev teach a class at UWM that brings together interdisciplinary student teams, including artists, to solve design, engineering and health care problems.

The event, held in the Harambee neighborhood, was sponsored by Made in Milwaukee, Milwaukee School of Engineering, Munger Technical Services and the Brady Corporation.

For Mark Anderson, who is new to his position at MSOE and who recently moved into Riverwest, the event was a chance to get to know the area.

“It was a chance to see more about neighborhood development and neighborhood transformation and it being next to my neighborhood, I thought it was a good idea to be here,” he said.

TEDxHarambee, which can be viewed here, was patterned after the popular TED Conference and TED Talks. Owned by the New York-based Sapling Foundation, TED is devoted to ideas “worth spreading.”

The original TED conference in 1987 focused on bringing together people from Technology, Entertainment and Design (TED) and has since broadened to other topics.

TED produces several conferences each year, in California and the United Kingdom, where leaders of their respective fields are invited to present lectures. Capitalizing on the popularity of the brand, TEDx was created in 2009 to allow communities such as Milwaukee to use the TED format to organize local conferences.