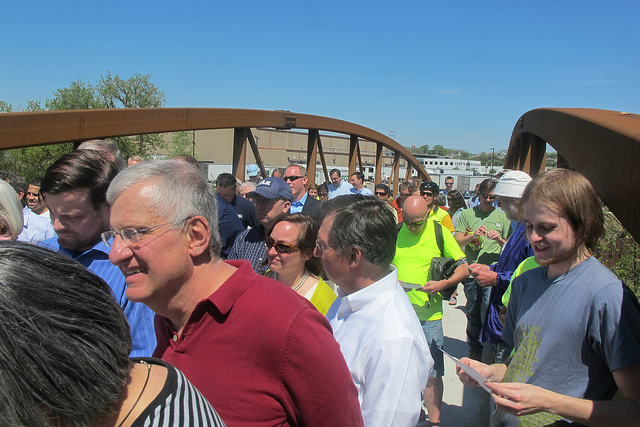 More than 50 people crowded onto the 33rd Court Bridge during the naming ceremony for Three Bridges Park. The name was chosen from more than 750 contest submissions. (Photo by Edgar Mendez)

Debra Tuckweed, originally from Boscobel, Wis. (pop. 3,231), moved to Milwaukee 35 years ago to work as a parole officer. She remembers riding into town with her parents and seeing the blighted Menomonee Valley for the first time thinking, “This is where I’m going to live?”

Once an eyesore that split the north and south sides of the city, today the Valley has been transformed into a vibrant, thriving public space.

The new park, once a railroad yard, is being built along the banks of the Menomonee River. It will be known as Three Bridges Park, the winning name in a contest that drew more than 750 participants. The name will go before the Common Council and Natural Resources Board in coming weeks for official approval.

The 24-acre park, which officially opens to the public on July 20, is the last major development of the From the Ground Up initiative. In 2010, Menomonee Valley Partners (MVP), the Urban Ecology Center (UEC), the City of Milwaukee, State of Wisconsin, other community-based organizations and countless individuals partnered on the initiative, which resulted in improved access to jobs, outdoor education programs and recreational activities. 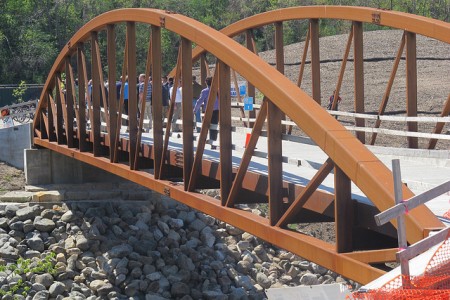 The 33rd Court Bridge was one of the projects of the $26 million “From the Ground Up Initiative.” (Photo by Edgar Mendez)

The park will be part of the Hank Aaron State Trail and will serve as the new “outdoor classroom” for the Urban Ecology Center’s Menomonee Valley branch. It is accessible via three bike/pedestrian bridges – located at 37th and Canal Streets, 33rd Court and behind the Mitchell Park Domes – that connect the Valley to surrounding neighborhoods.

Laura Bray, executive director of MVP, said the name was chosen both because it can roll off a child’s tongue and because it captures the spirit of the initiative.

Bray added that $22.5 million has already been raised for the initiative and that MVP hopes to complete the park by the end of summer. The park’s completion would be the last step in the valley’s transformation, according to Bray. It is expected to serve 10,000 children a year,

Tuckweed, now retired, bikes and jogs on the valley section of the Hank Aaron State Trail daily. Absent now is the stench from the nearby slaughterhouse as are the decrepit, shuttered factories that years ago made her cringe. She calls the park an added bonus to the atmosphere that already has been created in the valley, saying

Omar Bonilla-Ortiz, who works at the UEC Valley Branch and grew up just across from the long inaccessible Menomonee Valley, said he couldn’t wait to tell his nieces and nephews the name of the new park next door.

Added Bonilla-Ortiz, “They’ll be the last generation to know of the blight that was here.”