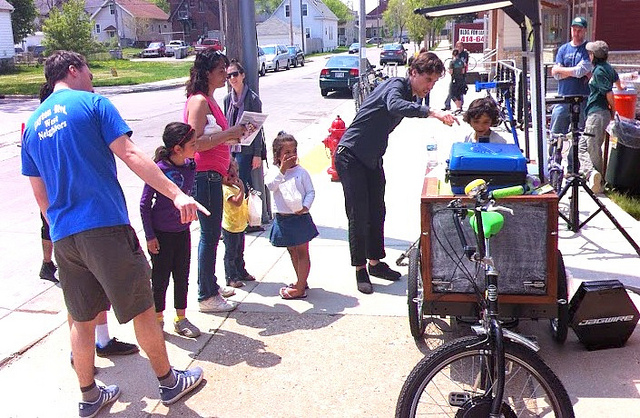 Editor’s note: This article, originally published on May 30, 2013, is one of a series profiling the finalists for Milwaukee Awards for Neighborhood Development Innovation (MANDIs). Layton Boulevard West’s Mobile Bike Hub is a finalist for the PNC Bank Trail Blazer Award, which recognizes an innovative approach to a community problem.

Dozens of adults and children attended the unveiling of a new “mobile bike hub,” an adult tricycle fitted with bins full of tools and supplies intended to spur greater appreciation for bicycling and to get children outdoors and active.

The vehicle was on display for the first time in front of the offices of the Wisconsin Bike Federation, 3618 W. Pierce St., during Bicycle Fiesta, a culminating event of Bike to Work Week.

“This is awesome,” said Milwaukeean Maxwell Washington, 28, who brought his three children to the event, sponsored by Layton Boulevard West Neighbors (LBWN). “It fills a big need and it will get kids out here and interacting … and exploring the world.”

Giorno, who graduated in 2012 from the University of Wisconsin-Milwaukee with master’s degrees in both urban planning and public administration, will ride around the neighborhood fixing bikes and promoting bike safety. For those with an old or broken bike, the hub will offer a chance to get back on the saddle for free, organizers said. 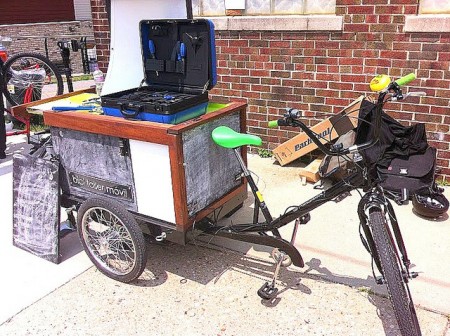 The mobile bike hub is an adult tricycle fitted with bins full of tools and supplies. (Photo by Brendan O’Brien)

“It’s been really well received … my expectation is that I will be busy with, at the very least, giving kids the knowledge of how to fix their bikes or get the bikes fixed,” said Giorno, who will work with neighborhood schools to get the word out about the hub.

Giorno will ring the unique-sounding bell affixed to the hub as he rides through the neighborhood, much like ice cream vendors do throughout the city.

As children and parents mingled around the bike hub, enjoying popcorn and taking part in raffles, the Bicycle Federation of Wisconsin sold used bicycles across the street.

“They want to ride and they need to be physically active,” said Liz Drame of her two children as her family shopped for bicycles.

A band of volunteers, including two architects, designed and built the hub while Bicycle Federation of Wisconsin staff members lent their expertise to the project. Construction of the bike hub was completed at midnight Thursday night.

“I got a tear because, for me, it was just a moving moment,” said Jezamil Vega-Skeels, a neighborhood planner at LBWN who spearheaded the project. “It’s overwhelming. I am more than happy.”

If the pilot bike hub project is successful in the Layton Boulevard West neighborhoods of Layton Park, Burnham Park and Silver City, it could eventually be replicated in other areas of the city, according to Giorno.

According to Giorno and Vega-Skeels, one of the project’s biggest challenges was designing the hub, which needed to be easy to ride while carrying the tools and supplies — such as bike repair stands — to make it functional.

After months of trial and error that included drawings and tinkering, the team came up with a design that features a sliding door that covers three tall bins while acting as a service table when closed.

“We’re the pioneers, so when other neighborhoods start talking about doing this, hopefully we can help them iron out those unexpected bumps that we struggled through,” Giorno said.