Playwriting specialist Fly Steffens is working with a group of students at North Division High School. She challenges them to mine their own thoughts and life experiences for ideas that they might want to write about.

“Prostitution,” says one young woman. “Scars,” adds another.  “Sexual violence,” says a third. “Good,” says Steffens, making it clear that she doesn’t think violence is good, but “it’s a good idea to write about.”

She jots down phrases, words and feelings, finding connections among them and imposing a loose order on the seemingly random thoughts.

Steffens is a Milwaukee Repertory Theatre teaching artist who worked with the North Division students as part of a semester-long program that used theatre to teach them about their neighborhoods. The teaching artists were placed in North Division, 1011 W. Center St., and 14 other area schools by Our Neighborhoods: Past Present and Future, a Milwaukee Rep program that ran for 25 weeks this spring.

Given a chance to express themselves, the students become caught up in Steffens’ enthusiasm, and the images and feelings that tumble forth are as real as the streets of Milwaukee.

“Arguing,” “shooting” and “drug wars” are concepts that come easily to the students’ minds but “churches,” “neighbors,” “friends” and “family” are not far behind. 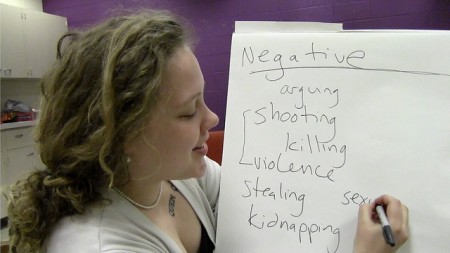 Teaching artist Fly Steffens jots down students’ ideas for what they might want to write about. (Photo by Alex Perry)

Steffens is pleased but not surprised by the depth and variety of the narratives the students weave.

She makes playwriting an energizing group activity, unlike the image many have of the solitary writer agonizing over a manuscript. Authors can write works such as poetry and novels alone, Steffens said. “But writing plays and working on theater is really the form of storytelling that is the most communal.”

Steffens’ belief in these young people is typical of the Rep’s teaching artists.

Others, such as spoken word poet Dasha Kelly, came to North Division to share their specialty with the students. Kelly read “Where I’m From,” a gritty rendition of the urban minority experience by poet Willie Perdomo.

Perdomo’s poetry creates vivid images through direct, evocative language and Kelly used his work to inspire North Division’s students to do the same.

Just as Perdomo built his poem from the sights, sounds and sensations of life in New York City, Kelly urged the students to recall their own impressions of growing up in Milwaukee.

For Kelly, her art represents more than self-expression — it is empowerment.

Kelly challenged the students to come up with concrete details to describe their neighborhoods. Seemingly mundane and unimportant, these details are the building blocks of what may become powerful poetry.

For Kelly, finding one’s voice is a basic human need.

Student Georgette Moore, a fledgling poet, agreed. “It was inspiring to see that even though we live in this neighborhood, you can still get something out of it.”

Milwaukee Rep connects students to their neighborhoods through arts

Students at Milwaukee’s North Division High School are learning about themselves, their history, and visual and spoken arts, thanks to an ambitious Milwaukee Repertory Theater program.

North Division students use spoken word to describe their neighborhoods