You are here: Home / Posts from Community / Incarceration rate for African American men
Share this...

In Milwaukee County, more than half of African American men in their 30’s are in or have been in state prison.  And that is creating a tremendous impact on the men, their families, their neighborhoods and the area nonprofit organizations attempting to assist them.

That was the finding of a study that was the center of discussion at a Nonprofit Center of Milwaukee workshop held at the Social Development Commission (SDC) Richards Street building.  Lois Quinn from the UW-Milwaukee Employment and Training Institute presented the study that examined 20 years of prison records.

The study determined that the incarceration rate for African American men in Wisconsin is about one in eight while the rate for white males is one in 81 and for Hispanic males at about one in 60.  She also noted that in Milwaukee County approximately two-thirds of incarcerated African American males came from the six zip codes in the poorest neighborhoods of the City of Milwaukee.

This trend became prevalent in the last 20 years according to Dr. Quinn as both the state and federal governments moved away from treatment solutions for drug offenses and towards incarceration responses.  That included prison and jail sentences for many nonviolent offenses which make up about one-third of convictions for African American men.

A panel discussion was held by representatives of both faith-based and nonprofit programs that work with the incarcerated.  It was stressed that efforts need to focus not only on helping prisoners’ re-entry into society but also on keeping young men out of prison in the first place. Torre Johnson from Holton Youth & Family Center said it is vital to prevent young people from becoming involved with the criminal justice system.

Reverend Willie Brisco representing MICAH said the Corrections system as it stands “does not correct anything” but only seems to try to throw away people.  Having so many African American young men in prison impacts all of the area and its economy, not just the neighborhoods that they come from, he added. In issuing a call to action, Rev. Brisco called on individuals, faith-based and nonprofit organizations to work together to attack the problem as one community.  Workshop Moderator Joyce Mallory echoed that by saying “It is time we get mad about this and do something about it.”

The workshop was presented by the Nonprofit Center of Milwaukee and hosted by SDC. To view the entire study, visit the UW-Milwaukee website at www.eti.uwm.edu. 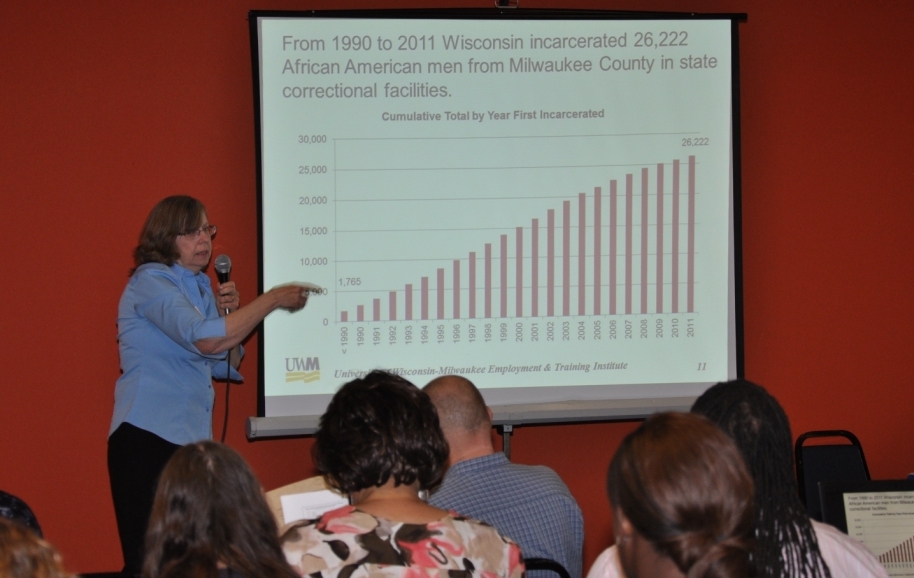