You are here: Home / Home / Carousel / Hairstylist gives free haircuts to the poor at St. Ben’s
Share this... 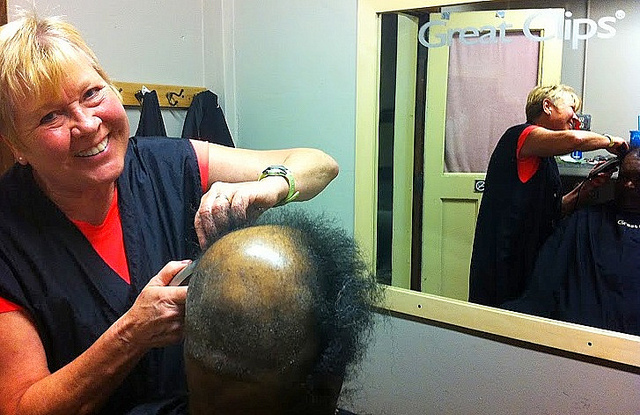 Wielding electric clippers, Judy Kinney spins around and cordially greets the next shaggy head of hair.

“Give me a Kojak,” said Josh Tucker, the owner of the mop in question, as he slides into the barber’s chair in the cluttered back room, not much bigger than a walk-in closet.

The dark blue apron goes airborne, gently landing on his chest and belly, the chair spins around, and Kinney and Tucker make eye contact in the mirror.

“Don’t have to be bothered by it. No trouble,” Tucker said with a wide smile, adding that getting a haircut gives him a sense of dignity.

For the last two months, every other Wednesday, Kinney has been giving free haircuts at St. Benedict the Moor, 1015 N. 9th St., to whoever sits in the barber’s chair, no questions asked. 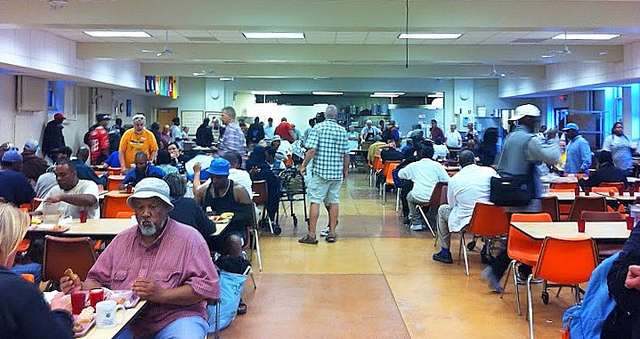 “It’s something I can do for somebody who needs it,” she said above the buzz of her electric clippers. “There’s satisfaction that I help (these) men look nice.”

Tucker, who lives on a fixed income with a bad heart and severe arthritis, relies occasionally on the free community meal St. Ben’s serves six evenings a week.

If not for the meal, “at times, I would go hungry,” the 67-year-old said as he headed to the cafeteria at St. Ben’s.

From a scribbled list on a small pad, Kinney called the next name as a gaggle of men mingled in the hallway.

“Where’s Keith?” Kinney shouted, summoning her next client as Tucker leaves the room.

“I needed to stay in shape for jobs interviews,” said Keith Fox, 51, after receiving a quick trim. “It’s about keeping myself looking presentable.”

Kinney, who has been a hairdresser for four decades, raised four sons. Most of her clients have been men and an occasional child.

For the few hours that Kinney cuts hair, the waiting list remains full, a sign of the great need in the community for this type of service, she said.

“I only have two hands,” Kinney said.

She never realized that poverty is “as bad as it really is. I never really gave it any thought until someone asked me if I wanted to do it,” Kinney said over the constant buzz of the electric clippers. “I didn’t want to do it, but I said I would.”

Kinney said most of her clients are quiet, keeping their thoughts to themselves.

“Sometimes I can get them to talk, but it’s not social,” she said. “They don’t want to talk. They want to eat, get their haircut and get wherever they’re going for the night.”

St. Ben’s is in the business of helping the poor, who can partake in a community meal and receive medical care at the primary care clinic run by St. Mary’s Hospital in one of the parish’s buildings.

Although the clinic and meals are major facets of the work done at St. Ben’s, it is the small services such as the haircuts, free showers, an eye glass service and free hygiene packs that make a difference in the self-esteem of the poor and are key for them to lift themselves out of poverty, said Brother Rob Roemer, the church’s volunteer coordinator and co-director.

“They need these basic resources that we might just take for granted,” he said.

The church also provides clothes, Wisconsin identification cards, prescription co-pays and bus tickets to the poor. Roemer said the people who are served at the church are not looking for a free handout. Rather, they feel blessed for what they receive, he said.

“Some of them, their lives are so simple and ordinary and wow, I’ve complicated my life with all of this stuff that I am worried about or caught up with,” Roemer said.