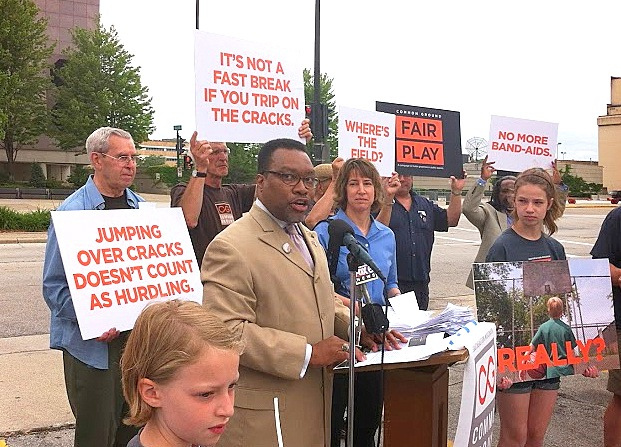 A Milwaukee-area community organization has found that two-thirds of the outdoor athletic and recreational facilities at public schools throughout the county are in terrible, poor or fair condition, a recently released report shows.

The report published by Common Ground, an organization of citizens, small businesses and churches, details inspections of the outdoor play facilities at Milwaukee County public schools. The findings give teeth to the organization’s “Fair Play” campaign, which calls for public funds to be used for outdoor athletic and recreational facilities in light of recent talk of a new sports arena.

“Fair play means that our children are practicing and playing at facilities that are safe and superb. Not just adequate, but superb,” said Rev. Carl Griffin, a Common Ground leader and pastor of New Life Baptist Church, during an event to unveil the report. The gathering was held across the street from the BMO Harris Bradley Center.

Officials and volunteers at Common Ground began making the pitch in April that if public funds are used to pay for a new Bradley Center arena, then at least $150 million and perhaps as much as $250 million should go to improve athletic facilities and recreational spaces at Milwaukee County public schools.

The report is composed of inspection data gathered by dozens of volunteers who surveyed all 268 public schools in the county’s 38 school districts. The Milwaukee Public Schools was one of the 11 districts with facilities that were rated in the poorest conditions, according to the report. 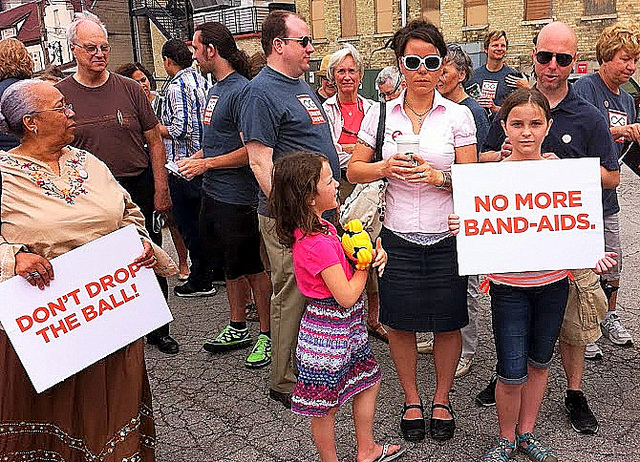 Using a rating scale from 1 to 5, with 1 being terrible and 5 being excellent, volunteers rated surfaces, hardware, fencing, bleachers and lighting during their inspections. They looked at baseball diamonds, football and soccer fields, tennis and basketball courts and tracks. They also inspected greens spaces and playgrounds.
Volunteers rated 13 percent of the sites terrible, 22 percent poor, 30 percent fair and 22 percent good. The remaining 12 percent of the sites were rated excellent. Sixteen public schools do not have any athletic facilities, the survey found.

“It goes with valuing the students. If we don’t nurture their needs to get outside and have a safe environment, it’s not showing that we value them,” said Nicole Smith, 34, a teacher at Milwaukee Public Schools, who attended the event with her two young daughters. “They need to know that they are valued in school.”

Smith and her children were among dozens of community members who attended the event. Some held signs that said “No More Band-Aids,” “Don’t Drop the Ball” and “Jumping Over Cracks Doesn’t Count As Hurdling.”

Common Ground leaders have begun meeting with officials at the 38 school districts in Milwaukee County.

“School officials who have seen our numbers think they are conservative,” said Jennifer O’Hear, a Milwaukee Public School parent and Common Ground leader.
Fair Play organizers hope to alleviate the safety hazards associated with the blighted outdoor athletic and recreational facilities. Ultimately they hope to create “a vibrant gathering space for activities and events, a place that will foster the opportunity for community engagement, healthier living and a deeper overall sense of neighborhood pride,” according to literature distributed at the gathering.

Last year, Milwaukee Bucks owner and former U.S. Sen. Herb Kohl argued for a new multipurpose arena in Milwaukee to replace the BMO Harris Bradley Center, and offered to make a personal financial commitment toward the new facility. He has not said how much he would commit.

The team reportedly told NBA Commissioner David Stern that the franchise will have a plan that includes a new arena when the team’s lease expires in 2017.

According to Common Ground, Timothy Sheehy, president of the Metropolitan Milwaukee Association of Commerce, has suggested a half-cent sales tax increase to pay for a new arena. No formal financing plan has been announced, but Common Ground members said they should be a part of the discussion.

Common Ground will hold a training meeting at Mount Mary College, 2900 N. Menomonee River Parkway on Saturday, July 13 for those interested in volunteering in the Fair Play campaign. The 9 to 11 a.m. meeting will in held in room 248 of the Notre Dame Hall building.