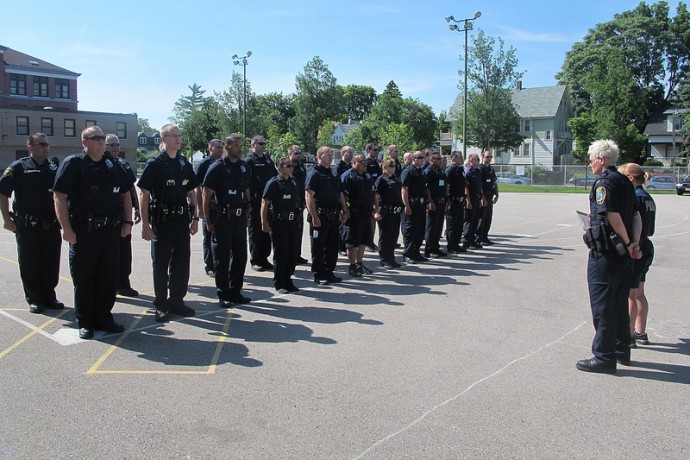 While police officers and emergency personnel no longer have to live in the city, they must live within 15 miles of the city limits. (Photo by Edgar Mendez)

Prior to signing the state budget into law, Gov. Scott Walker received an urgent plea on behalf of members and supporters of the Southside Organizing Committee (SOC), to veto the amendment ending the city of Milwaukee’s employee residency requirements.

That plea went unacknowledged, according to Steve Fendt, executive director of the SOC. The law went into effect on July 2.

The letter was co-signed by community leaders and each elected official representing Milwaukee’s near South Side, including Alderman Bob Donovan, County Supervisor Peggy West and State Senator Tim Carpenter, among others.

“Please reconsider your placement of the municipal residency policy in the biennial budget,” read part of the memo sent to Walker.

Several requests for comment from Walker’s office regarding the letter brought no response.

In May, the legislature approved the measure ending the longtime mandatory residency requirement for City of Milwaukee workers, though police, firefighters and emergency responders will still be required to live within 15 miles of the city.

The city’s Common Council responded by adopting a resolution to reinstate the residency rule.  The council also directed the city attorney to fight the state provision in court.

The SOC’s letter to Walker pointed out that the majority of South Side residents had supported him in recent elections.

“In your election to Milwaukee County Executive in 2002, and then your re-election in 2004 and 2008, you won the South Side vote each time. We think it’s because you put the taxpayers first, and you sought better county services at a more affordable price: things we value highly as residents and elected [officials] on the Near South Side.”

“Elected representatives were in unanimous agreement that this (measure) should be taken out of the budget and to ignore them with no acknowledgement at all is a pretty loud statement,” Fendt said.

The letter also stated that city employees who don’t live where they work would be removed financially and socially from the communities they serve.

But Milwaukee Police Association (MPA) President Mike Crivello said that the SOC and others are looking at the issue the wrong way.

“Policing is not just a job or a vocation, it’s a calling; people become police officers because they like helping people,” Crivello explained. He said he and other officers care deeply about the communities they serve, and that never once has where he lived been an issue.

Crivello added that he works in the central city, but has lived for years on the far east or far south sides of Milwaukee.

The MPA has vowed to fight in court any city action to maintain the requirement. As of now, the SOC has no plans to file a lawsuit, according to Fendt.