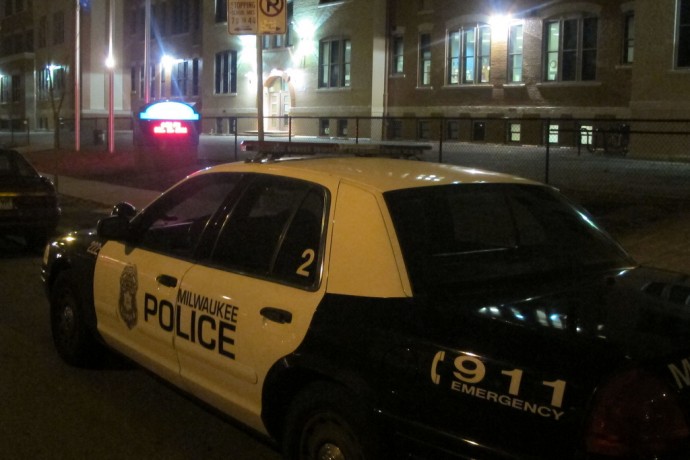 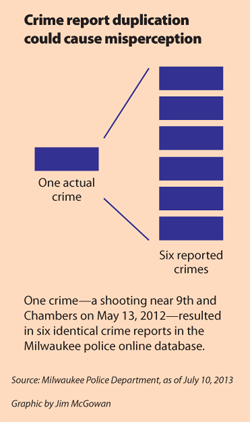 On Mother’s Day 2012, a woman was shot in broad daylight while walking to her car after church services near 9th and Chambers streets. As a result, a small group of neighbors began working to organize the residents living on the two blocks of 9th Street bounded by Burleigh Street on the north and Locust Street on the south.

Had they looked at the Milwaukee Police Department database, called COMPASS, to see what other crimes occurred in their neighborhood that day, they might have been even more alarmed. On those two blocks in District 5, there appeared to be six aggravated assaults on May 13, 2012. However, a closer look would have revealed that five of those incidents were exact duplicates: the same incident number, date, time, offense and location.

An examination by Milwaukee Neighborhood News Service (NNS) of the COMPASS data for each of the city’s seven police districts found that 20.3 percent of incidents listed in the database for 2012 were duplicates. The percent ranged from 17.4 in District 7 to 22.2 in District 3.

After Milwaukee Neighborhood News Service inquired about the data, the 2012 crime figures were revised to eliminate duplicates, probably late in the day on Thursday, July 11, suggesting that the data had been inaccurate for at least six months.

Users looking at summary data on the COMPASS site would have had no way of knowing that there were multiple incident reports for the same crime. Prior to July 10, the total number of crimes for 2012 was stated as 56,368. On July 12, the figure was 44,878, a difference of 11,490. 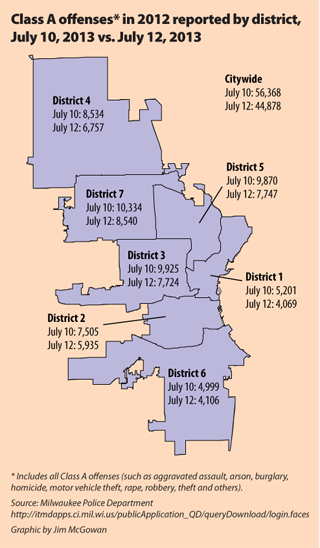 The purpose of COMPASS, according to the City of Milwaukee Web site, is “quite simple; a community can collaborate better, if it has a better picture of how problems and opportunities are really interelated (sic).”

Asked why the Mother’s Day incident on 9th Street might have been listed multiple times, a staff person at the MPD Open Records Section speculated that there might have been a “computer glitch” involving the transfer of data from Milwaukee to Madison and back. In fact, a disclaimer on the COMPASS Web site warns, “…this crime data may reflect … information that may include mechanical or human error.”

Lt. Mark Stanmeyer, public information officer for MPD, referred questions about the inaccuracies to Nancy Olson, chief information officer for the city’s Department of Administration. Olson apologized for “the inconvenience” of the unannounced changes to COMPASS. She explained that a programmer removed the duplicates at the request of a community member, without notifying her, anyone in management or MPD.

“It was a mistake and I will rectify it with policies and procedures,“ Olson said.

She asserted that removing the duplicates “doesn’t change the data at all; it’s just the way we’re pulling the data out of the database.“

The reason for multiple rows with the same incident numbers, Olson explained, is if any information about the incident is different in one of the database fields—for example, if there were more than one victim. However, the data available to the public on COMPASS doesn’t display those differences.

Olson confirmed that COMPASS is the only way for citizens to get official information about crime in their neighborhoods, other than “the old-fashioned way, the Open Records request.” However, citizens need to pay $.25 per page for records obtained in that way. 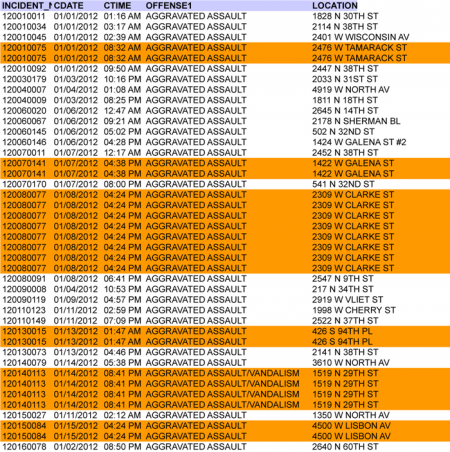 One sample spreadsheet page from online incident reports in Police District 3 shows a number of duplications (highlighted). (click to enlarge)

In December 2012, an independent audit of Milwaukee crime statistics and reporting methods, published annually by the Milwaukee Fire and Police Commission, concluded that although the Journal Sentinel allegations about mistakes in crime classification were true, there was no evidence of intent to mislead on the part of the department.

The audit reported that there have been extensive problems with the computer system since its installation in 2005 as well as with the level of expertise and training of department staff. It made recommendations both for improving the reporting and for replacing the computer software system.

According to the audit, which criticized the “accusatory tone” of the Journal Sentinel reporting, “the public needs to understand that all of the police reports and their corresponding statistics are still present in the records management system and can be researched at any given time. With the exception of those records which are confidential according to public records law, anyone can request to see this information.”

Ed Claughton, CEO of PRI Management Group and author of the independent audit, said the accuracy of the data “is a matter of quality control. If information is being duplicated or incorrectly listed, there’s still an issue with quality control and that would be a concern.” He added that in light of the audit and the Journal Sentinel investigation, “certainly you would think … it would be more unlikely for this to happen.”

Errors can be avoided, Claughton said, by “routinely checking the figures, rechecking the data day to day, conducting internal audits and conducting manual checks of the information that the system is producing. You always have to have a pair of human eyes looking at the data that’s produced by these systems. You can’t have complete reliance on the data without checking it. “

Claughton added, “The public has a vested interest in their safety so they want to have and should have accurate information.” 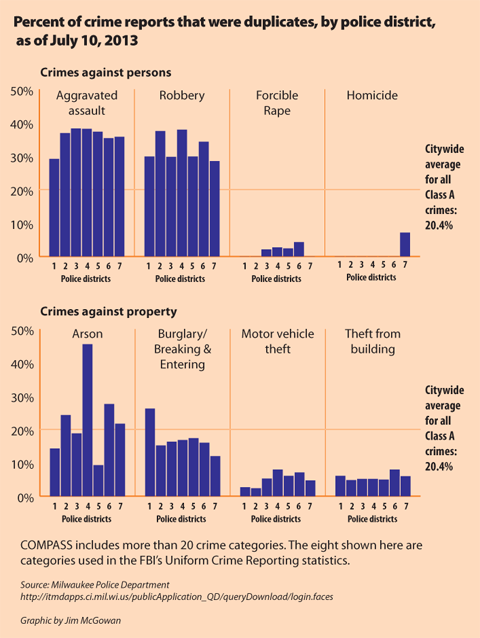