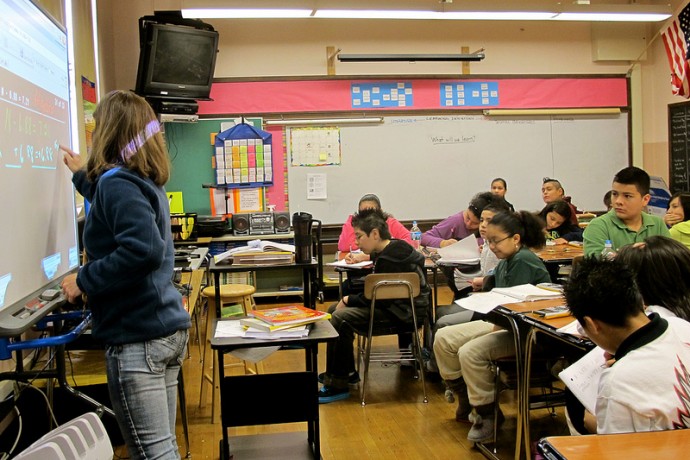 A teacher at the Greenfield School provides classroom instruction to students. (Photo by Tessa Fox)

The effort to fill hundreds of teacher positions in the Milwaukee Public Schools during the last five months has put the district in range to meet its goal of being fully staffed by the beginning of the school year.

MPS officials recently reported the district has hired about 90 percent of the approximately 400 teacher positions needed to be filled when school begins throughout the city on Sept. 3.

“We are in much better shape because we have a deeper applicant pool than what we had in the past,” said Karen Jackson, the district’s chief humans resources officer. “I have no doubt that we will do it.” 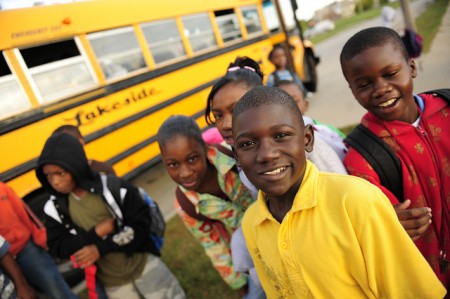 Students should expect to find teachers in every classroom when they return to school. (Photo by Milwaukee Neighborhood News Service)

After officials this winter projected the district may need to fill 700 teacher positions, MPS officials embarked on an aggressive hiring campaign that consisted of a handful of job fairs, including one attended by more than 1,000 people in March. MPS officials reduced the number of teachers needed to about 400 after more analysis of resources and personnel shifts within the district, Jackson said.

MPS has also hired a number of paraprofessionals and principals during the last five months after personnel have been promoted or left the district.

The district’s ability to fill the positions is a relief for Jasmine Alinder, the board president of Parents for Public Schools-Milwaukee. The trend, however, is disheartening, Alinder said.

“It’s incredibly concerning,” said Alinder, who pins a lot of the staffing shortage on Act 10, the controversial collective bargaining reforms that greatly diminish the power of the teachers’ union in Milwaukee and forces teachers to pay more for their health and pension benefits.

“Until we have a reformed funding system in this state and a stable funding stream, I think we are going to keep experiencing this kind of roller coaster ride,” Alinder said.

Milwaukee teachers’ union officials did not respond to requests for comment.

In addition to Act 10, the unusual number of teacher positions to be filled was caused by a three-year trend of retirements and resignations associated with an aging pool of teachers, according to district officials.

“The amount of teachers was not unexpected, but it was higher than usual, about double,” Jackson said. “We expect to be stabilizing very shortly. We may have another year, but I don’t expect next year to be as high as this year.”

In addition to educating children, teachers are the institutional and cultural lifeblood of MPS schools, Alinder said.

“Schools are about building neighborhoods and communities and when you start having to strip away the teachers that make that community, the kids really suffer,” she said.