You are here: Home / Home / Carousel / Family remembers loved one while clinging to hope for justice
Share this... 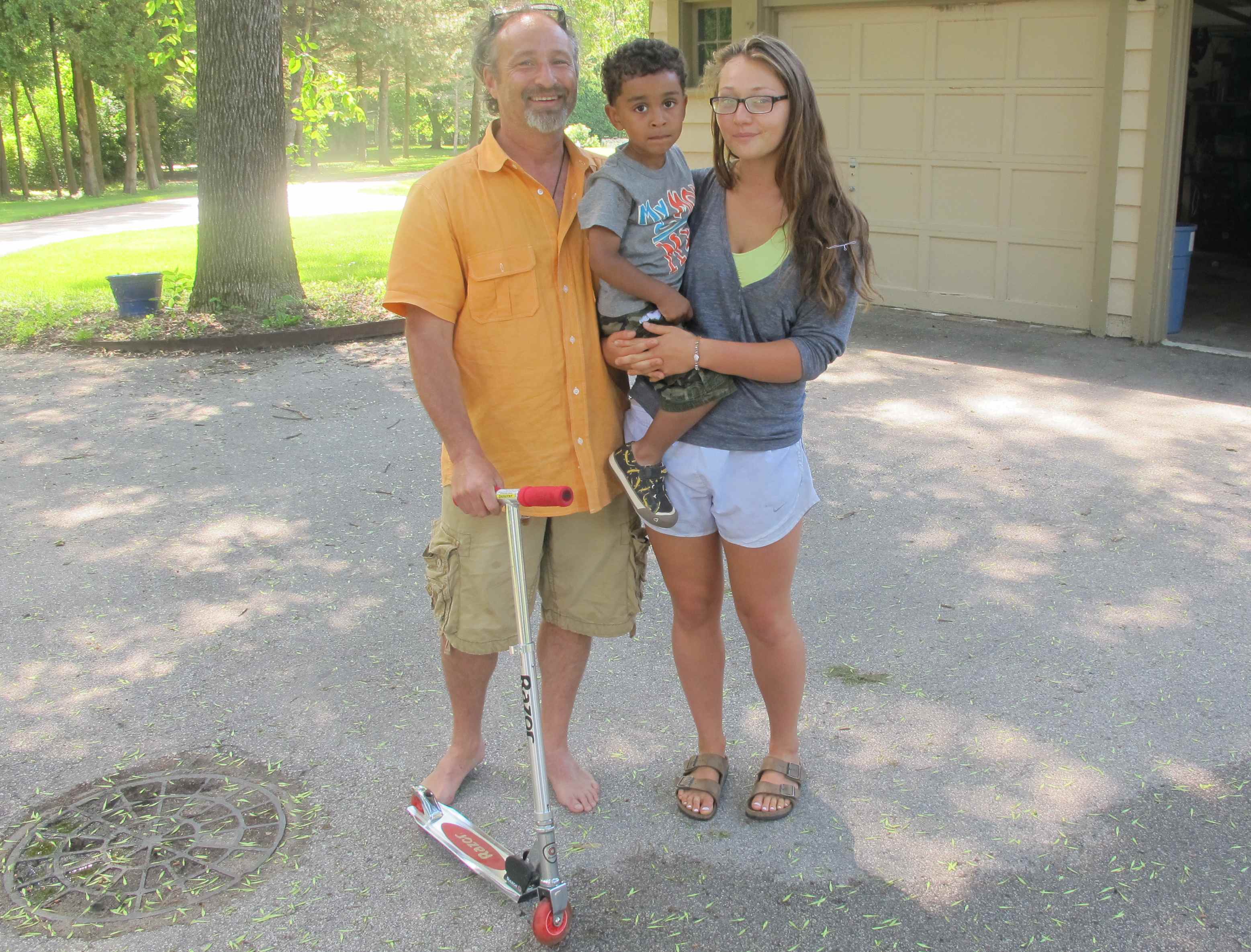 Rick Kohen and his daughter Kaitlyn have begun to teach JJ’s 3-year-old son Julius how to ride a scooter. (Photo by Edgar Mendez)

It has been seven months since Rick Kohen offered a $10,000 reward for information leading to the arrest of the person or persons who killed his 28-year -old-son Justin “JJ” Kohen, but the case appears no closer to being solved then it was when he was murdered more than a year ago.

This despite the Kohens’ efforts to maintain public interest by holding press conferences and renting out digital billboards with information about the case and the reward. County Supervisor Peggy Romo West hosted two events in JJ’s honor in April, including a candlelight vigil and a day of action, in which participants went from door to door distributing fliers about the murder in the neighborhood where he was killed.

“We have received a few tips but nothings panned out,” wrote Lt. Mark Stanmeyer of the Milwaukee Police Department (MPD), in an email. He explained that the benefit of offering a reward to find a culprit varies but that the MPD appreciates any help it can get.

JJ is one of 38 uncleared homicides in 2012. There were 92 homicides in the city that year, according to Stanmeyer.

“JJ was just like everybody else,” said Rick Kohen, a businessman and property owner, pointing to a collage of photos in the hallway of his Fox Point home.

It’s been 15 months now since JJ, who was 28, was stabbed to death in a South Side alley behind his home near South 16th Street and West Cleveland Avenue. A witness saw two men approaching him before he was attacked, but they remain at large. Rick has offered a $10,000 reward for information leading to an arrest. Police suspect that robbery was the motive.

“He was a very normal, happy-go-lucky kid, lived a very normal life, and grew up in a very normal house,” said Rick, as he glanced at a picture of JJ sporting his Nicolet High School soccer uniform. JJ spent two years at the school but graduated from high school in Florida, though he spent nearly all his adult life in Milwaukee. 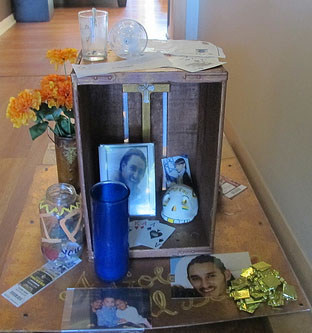 An ofrenda (altar) created in JJ’s honor features Packers tickets, chocolates and a deck of poker cards, among other items. (Photo by Edgar Mendez)

Despite growing up in the suburbs, JJ was a city kid who loved the club scene, rap and hip-hop, and sported every hairstyle from cornrows to dreads to a shaved head. He brought social and ethnic diversity to the family, said his father, as he puffed on a cigarette on the backyard patio. “His friends spanned all ethnicities, sizes and shapes,” said Rick.

As an adult JJ worked at the family businesses mostly, including for two years at now closed Centre Court Pub and Grill across the street from the Bradley Center and also as a building manager and caretaker for his father’s properties, including the one he was living at when he was murdered.

JJ was also very close to his family, said his father.

JJ’s sister Katilyn, 20, remembers her brother as someone who was funny, outgoing and always there for her. She is studying nutrition at Northern Arizona University, but has been back in town for the summer. She attended UW-Milwaukee before her brother’s death but says it is now hard for her to stay in town.

“It brings back bad memories; I’m in Arizona just trying to move on,” Katilyn said.

She often visited her brother, trying to cook healthy foods for him, but JJ’s favorite was tacos. She recalled a time during high school when she became self-conscious about her weight and lost 20 pounds. When she saw JJ, he said to her, “You look way too skinny, you need to go eat a cheeseburger.”

Besides having more time with him, Katilyn said there’s nothing she would have changed about her relationship with her brother.

JJ was also a father. His daughter Jalina, 7, lives in Florida, while his son Julius, 3, lives in Milwaukee with his mother Keeshia Roberson. Though JJ and her weren’t together at the time of his passing, Rick and Keeshia maintained strong connections. Recently, they celebrated Julius’s third birthday at Rick’s house and over 40 of Roberson’s friends and family attended.  Julius visits his grandfather three times a week, and they’ll be attending their first baseball game later this summer.

“It’s a blessing I’d rather not have,” said Rick, as he looked at a photo of the first baseball game he and JJ went to together. “It should be all of us there.”

When asked how he spends his days, Rick said, “I cry mostly.”

Rick said he thought he had lived through it all by his 50s: divorce, loss, success, failure—the gamut of life. Then tragedy struck.

“As a family it shakes you to the core and as an individual it shakes you at the root,” said Rick, who said his grief is incalculable.

There are at least two people out there who know who killed his son, Rick commented. He is fearful for his family as well as the community at large, knowing there’s a remorseless killer who hasn’t been brought to justice.

Rick described JJ as a skilled poker player who competed in tournaments across the country. “His dream was to play in the World Series of Poker,” Rick said. Now he can only wonder what drove someone to take his son’s life.

The Kohens are hoping for a resolution to the homicide case, but, according to Rick, there will never be closure, just a void.

“Now you’re just left with memories; you don’t get to experience new things together,” said Rick, his voice shaking.

Anyone with information about JJ’s murder is asked to call the Milwaukee Police Department at (414) 935-7360. The caller may remain anonymous.