You are here: Home / Home / Carousel / Hundreds flock to the grand opening of Three Bridges Park in the Menomonee Valley
Share this... 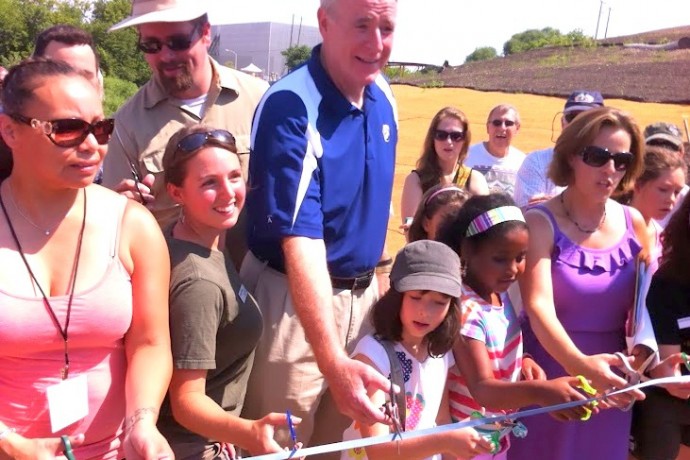 Desolate wasteland once used as a railyard has given way to Three Bridges Park, an open stretch of scenic trails winding through the Menomonee Valley that was recently officially opened to the public.

Under sunny skies, a few hundred people celebrated the opening of the 24-acre park between 27th and 37th streets that, along with the trails, is home to three bike and pedestrian bridges and native landscaping. The park will also be a venue for a river restoration effort, community gardens, public art and a natural habitat.

“This is a great day for Milwaukee,” said Milwaukee Mayor Tom Barrett during the ceremony. “We are witnessing truly a renaissance that is occurring right here in the Menomonee Valley. This is a proud day for our city.”

The park is part of a $25 million “From the Ground Up” project that began in 2002 to reclaim land along the Menomonee River. The project also consists of extending the Hank Aaron State Trail six miles to the west. 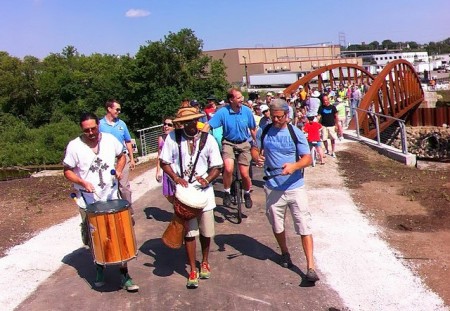 The project is “about connecting jobs, nature and neighbors together,” said Laura Bray, executive director of the Menomonee Valley Partners.

Ken Leinbach, director the Urban Ecology Center, told the crowd that he “actually start(ed) to well (up) and cry just a little bit” when he rode his unicycle into the park before the grand opening that morning. “Everybody has been working so hard and so long for this day and we have a glorious day that is blessed. It’s amazing” he said.

The ecology center will use the park as an outdoor science classroom to teach visitors about their natural surroundings, according to project officials.

“The best part is to see the younger kids here. They get to understand something other than the iPad and the video games,” said Gail Pavletic as she enjoyed a small bowl of ice cream.

The grand opening event was also comprised of demonstrations, free ice cream, live music and local food vendors. Before dignitaries gave their remarks and cut the ceremonial ribbon to open the park, a small band of protesters briefly disrupted the event, using a bullhorn to voice their displeasure over the health and safety practices at the nearby Palermo’s Pizza facility.

The project was spearheaded by the Menomonee Valley Partners and the Urban Ecology Center, which collaborated with the City of Milwaukee and the state Department of Transportation. Hundreds of businesses, organizations and individuals have helped fund the project, which will cost $1 million less than anticipated, according to park officials.

The project is part of a broader public effort to revitalize the valley. During the past 14 years, 39 companies have moved into the Menomonee Valley, creating 5,000 jobs and one million square feet of sustainably designed buildings.

“I saw it before it got developed. It’s pretty neat to see it from an idea to reality,” said Terry Pavletic, who has worked at Joy Global, located on the southwest corner of the valley, for 34 years. “From what it was to what it is, it’s a big difference.”