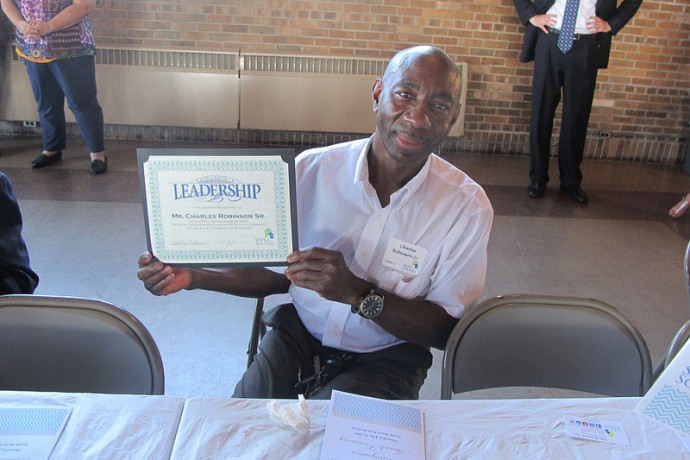 Linda D. Sumbry, who’s in her 60s, calls herself a “cleanup lady.” She sweeps up garbage in the alleys and streets and picks up trash from the lawns in the Sherman Park neighborhood she’s called home since 1973.

She says people in the neighborhood, who call her mom, grandma or Mrs. Linda, often come to her with problems, many times with tears streaming down their cheeks. And she says she never turns them away, not without offering at least an ear to listen and hopefully a solution to their dilemma.

In other words, she’s a neighborhood leader, one of 69 recently honored by Safe & Sound.

“I try to find something good to say each day to help someone out,” Sumbry said. 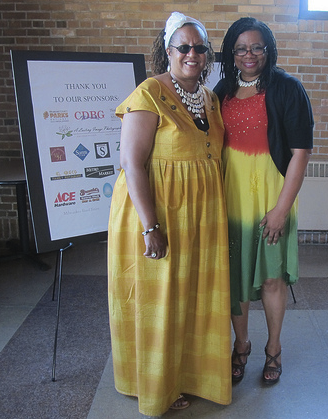 Denise Wooten (left) and Auriea Mosley were honored for their work with 14th Street Cares Block Watch in the Borchert Field neighborhood. (Photo by Edgar Mendez)

According to Barbara Notestein, executive director of Safe & Sound, the individuals who were honored were chosen because they’ve all made a selfless and positive impact on the city.

“They’re people who have in some significant way made Milwaukee a better and safer place to live,” Notestein said.

Mayor Tom Barrett issued a proclamation that the day be known from now on as Safe & Sound Neighborhood Leaders Day.

“We understand that there are neighborhoods that are changing, that lack funding, that lack accountability; but, I will encourage you from this point on to take advantage of all the resources available through programs such as Safe & Sound and the City of Milwaukee to make things better,” Davis said, addressing the honorees.

Charles Robinson Sr., of Borchert Field, said his neighborhood has already begun to do that, noting the Targeted Investment Neighborhood (TIN) status awarded to 14th Street C.A.R.E.S. block club there earlier this year.

Robinson said the key to turning a neighborhood around is finding a few people who are committed to change, then convincing others that the area can improve if neighbors combine their talents and work together.

“Everybody has a gift or some attribute that’s useful; you’ll never know that if you don’t associate with them,” Robinson said, mentioning six community gardens he and other neighbors tend to each morning.

Honoree Auriea Mosley grew up in Borchert Field in the 1960s and described her neighborhood as good in the 80s, bad in the 90s, but making a comeback.

Mosley, who left the neighborhood for 10 years but has been back since 1987, leads cleanups, has been a block watch captain, a liaison for the League of Martin (an organization of African American police officers), and someone who’s constantly communicating with fellow Borchert Field residents and local police.

Compassion and concern for her neighbors also drive Sumbry to head out in the morning, afternoon or sometimes evenings, to clean and chat. On the occasions she doesn’t come around, neighbors come to her, ringing the doorbell and asking where she’s been all day, she said.

“It makes me feel good and gives me a purpose to never give up on my neighborhood and keep trying,” Sumbry said.

With the help of other residents and community organizers from Safe & Sound, the neighborhood is cleaner and looks great, she added. “Where you live is important and first impressions of a neighborhood are lasting impressions.”