You are here: Home / News / Arts and Recreation / ‘Peace bracelet’ highlight of public art display at City Hall
Share this... 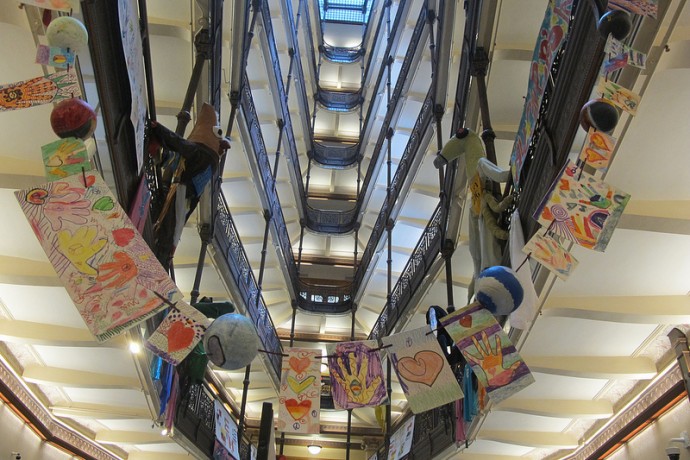 More than 100 youth worked on the giant “Peace” bracelet. (Photo by Edgar Mendez)

Stretching 38 feet in circumference, the oversized charm bracelet dangled from the second floor of City Hall to the main lobby. The charm, or “peace” bracelet, was one of several pieces of art on display recently as part of the Milwaukee Public Theatre’s Cultivating Community Art projects.

The projects included giant puppets, parade floats and other pieces constructed by artists working with hundreds of local youth. The artwork was also displayed at the Summer of Peace and Latino Carnaval parades this summer and some will be featured in the Dia De Los Muertos parade in November. The bracelet, created by artist Kristelle Ulrich, was one of several displays featuring peace and anti-violence messages. 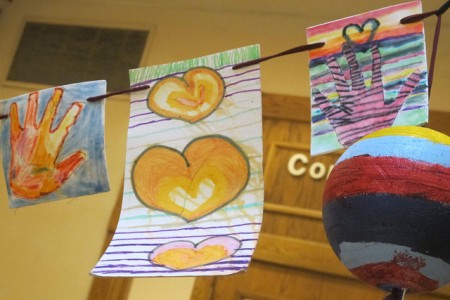 Symbols of warm hands and hearts adorn the bracelet. (Photo by Edgar Mendez)

Ulrich, a Milwaukee native, produced the piece with help from children and teenagers at the Holton Youth and Family Center. The bracelet was fashioned by combining colorful squares decorated with either hearts or hands and foam balls to create an image symbolizing togetherness and a sense of peace among all who helped create or view the ornament of peace, Ulrich said.

She asked young people to contemplate what peace felt like, sounded like and even tasted like and then asked them to use bright colors to express those feelings.

“I’ve been asking kids to think about what peace meant to them all summer,” said Ulrich, who’s been teaching art for more than 30 years.

Along with the bracelet, other pieces on display included puppets such as a giant praying mantis wearing a shield labeled “Govt. Bug,” a float depicting the Menomonee Valley’s new “Three Bridges Park,” and “Celebration of Life,” a display featuring commemorative tombstones and a memorial arch in honor of those killed by gun violence in Milwaukee.

James Anderson, who sells vegetables for Walnut Way in the lobby of City Hall, described the displays as beautiful.

“And it’s not just the fact that they’re art, it’s the cultural significance behind the pieces,” said Anderson, gazing at masks and headdresses created by youth from Boys and Girls Clubs.

Anderson said young people better express themselves through art, adding, “Kids nowadays are growing up fast and learning quickly, and through their art they’re sharing that information with us.”