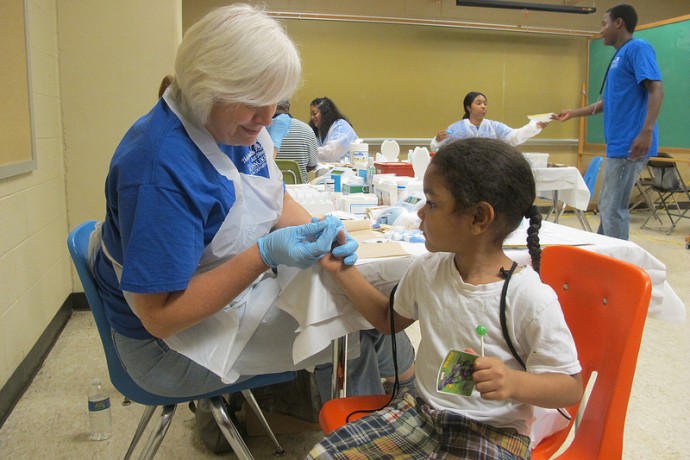 Katherine Krueger, who works for the City of Milwaukee, administers a finger prick lead test to Arion Taylor, 5. (Photo by Edgar Mendez)

In an effort to prevent an outbreak of potentially deadly illnesses such as measles, mumps, pertussis (whooping cough) and other communicable diseases, the Milwaukee Health Department (MHD) is working with Milwaukee Public Schools and other community partners to get local youth vaccinated.

Free immunizations were provided to youngsters at both North and South Side MHD-sponsored Back-To-School Family Health Fairs. MHD personnel checked medical records on the Wisconsin Immunization Registry to determine whether attendees were missing shots. Currently, 80 percent of all Milwaukee residents have been fully immunized, according to Paul A. Biedrzycki, director of disease control and environmental health for MHD.

“Ninety-five percent of the community needs to be vaccinated to prevent outbreaks from happening,” Biedrzycki said.

Since 6 percent of residents sign waivers to opt out of immunizations for themselves or their children for religious, medical or other specific reasons, the city’s official compliance rate for immunizations is 86 percent

The Center for Disease Control (CDC) standard for immunization coverage against communicable diseases among children entering school also is 95 percent. School-age children are vulnerable to an outbreak, but, according to Biedrzycki, they’re not the ones at the highest risk.

“The biggest danger is that they spread diseases like measles or mumps to their little brothers and sisters who aren’t in school yet,” Biedrzycki said.

He added that there are also other vulnerable populations in the city, especially on the South Side, due to the influx of new immigrants who might not know the immunization status of their children, or themselves. 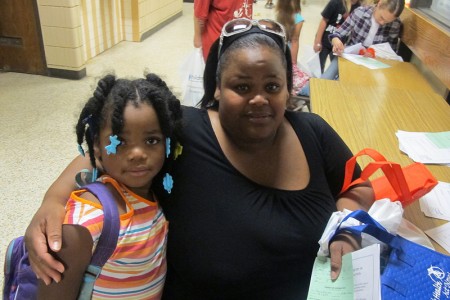 Valerie Reid and her daughter Savannah, 6, left the fair with school supplies and health information. (Photo by Edgar Mendez)

Dr. Eric Gass, public health research and policy director for MHD, said the fair was one way to help parents and guardians get their children the services they need. Adults also were able to obtain information about getting medical services for themselves from the many local health organizations and social service agencies that sponsored booths at the fairs. In addition to immunizations, hearing tests, eye exams, lead testing and other on-site health services were offered at the fair. Once children received the services they required they were given free backpacks and school supplies.

“We’re providing a place where all the kids’ needs can be met and they can be ready for school and ready to learn,” said Gass. Halfway through the event, more than 1,200 youth had been served at South Division, 1515 W. Lapham St.

More than 500 vaccine shots were administered at South Division to 245 clients, up from 445 vaccinations and 215 clients at last year’s fair.

At the North Side fair, held at Mother Kathyrn Daniels Conference Center, 333 shots were provided and 162 clients served, compared to 750 immunizations and 304 clients in 2012. Organizers attributed the lower numbers this year to a change in location. “Catch-up clinics,” where youth can receive free immunizations, will be offered throughout the school year at various locations throughout the city.

At South Division, many parents were unaware their children didn’t have all their shots.

Jesus Nunez, originally from Puerto Rico, was there with his four children. He got in line at 9 a.m. and waited patiently before finding out two of his kids needed vaccinations.

“I didn’t know they were missing anything,” said Nunez in Spanish.

Elizabeth Maturin, who spent three hours at the fair, was surprised that her children weren’t fully immunized. She said three of her kids got shots, as well as free backpacks and supplies.

“I saved a hundred dollars or more,” Maturin said with a smile as her children donned their new backpacks.

Vaccinations cost MHD between $40 and $200 per shot, according to Biedrzycki.

Lead testing was also a major need addressed at the fair. Biedrzycki said 13 percent, or more than 4,000 school age Milwaukeeans, have lead levels higher than the CDC threshold of concern. A finger prick lead test was administered to 264 kids at the fairs and results came back in three minutes.

“We’ve seen some kids with extremely high lead levels,” said Stephanie Ortiz, who works for MHD, and was registering parents at the fair. Ortiz said that all those who had elevated lead levels received a nurse consultation before they left.

A recent UW-Madison research study analyzing data from Milwaukee Public Schools found that young children who had elevated levels of lead were three times more likely to be suspended from school by the fourth grade and had other discipline problems. Lead-based paint, found in older housing stock such as Milwaukee’s, is the primary source of elevated lead levels among children.

“Kids crawl around on the floor and pick up fine dust from lead paint on their hands which they transfer to their mouth; they’re subtly poisoned,” said Biedrzycki.

Families in low-income communities have less access to health care, putting them more at risk for communicable diseases and lead poisoning, explained Biedrzycki.

Gass said that’s why it’s crucial to provide children with access to preventative health services such as those offered at the fair.  “Disease is a stress on families and sick kids can’t learn.”