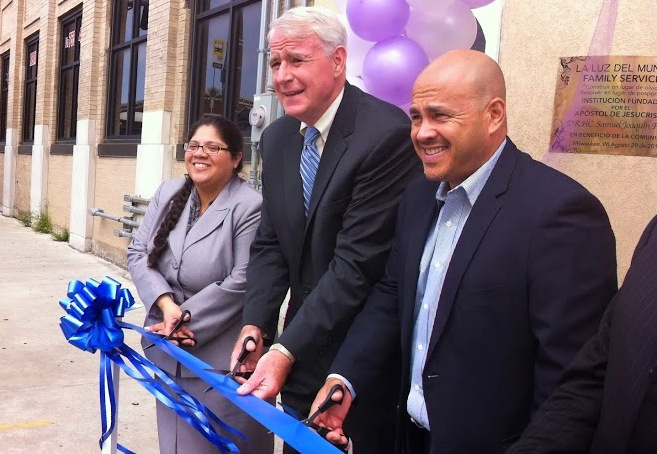 La Luz del Mundo Family Services has opened a violence prevention and intervention center on the South Side in an effort to address domestic and street violence that can besiege a family and the community.

The center, at 1570 W. Greenfield Ave., will offer support groups and classes intended to foster more peaceful households and neighborhoods.

Mayor Tom Barrett called the creation of the center a “gigantic step for the community,” during a ribbon-cutting ceremony.

The center is proof that “we can provide a place for people to empower themselves to have better lives,” he said. 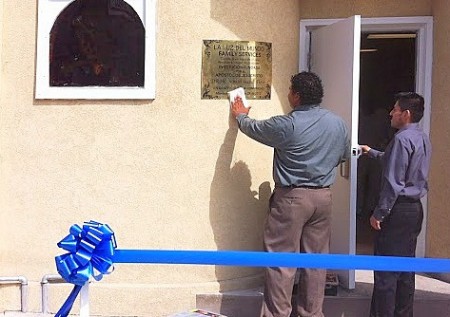 A volunteer shines the La Luz del Mundo Family Services sign outside at the center before the event.

The project to open the center began two years ago when Patricia Ruiz-Cantu, the center’s executive director, approached officials at La Luz del Mundo Church, 1316 S. Cesar E. Chavez Dr., to explain that domestic violence services were not available on the south side of the city.

“There are a lot of services available in other parts of the city, but nothing on the south side,” Ruiz-Cantu said.

La Luz del Mundo Family Services receives support from the Milwaukee Fatherhood Initiative and referrals from agencies and organizations throughout the area, including the Department of Correction.

La Luz del Mundo Family Services will host support groups in Spanish and English for perpetrators. The group setting allows perpetrators to discuss anger management, the pressures that come with being a parent and in a relationship, and their past encounters with violent individuals.

The center will also host support groups where father and mothers will be able to hone their parenting skills and learn methods to create healthier relationships.

“A key in this community and society is dealing with the family as a whole,” Ruiz-Cantu said. “It’s teaching some of the skills and learning how to be a parent.”

The cheerful 1,500-square-foot center, which is a product of hundreds of volunteer hours, will also provide services for children who have witnessed violence, a college-preparation center and community rooms.

Ruiz-Cantu said the group meetings and educational opportunities will focus on street violence as well.

“For me, the (center) means a better neighborhood,” said Jose Lopez, 52, a volunteer at the center, who added that its opening sends a message to those who create violence in the neighborhood. “If they come through (our) doors, they are more than welcome, no questions asked.”