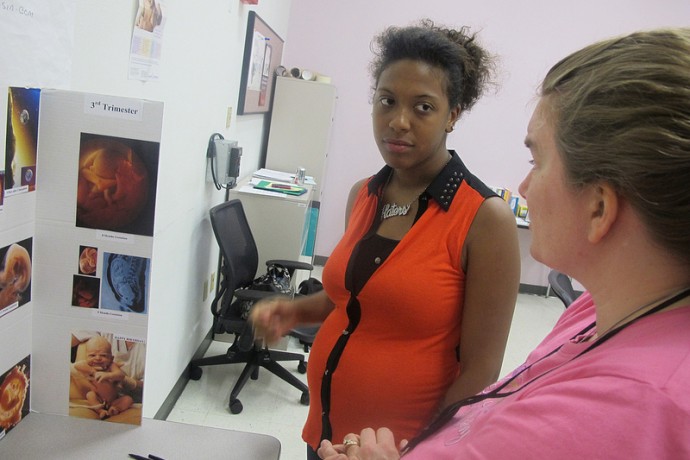 When Tinathea Kingsby, executive director of Abundant Blessings Community Outreach Services (ABC), hears about the death of an infant in Milwaukee she feels sad, but also motivated.

Kingsby said she wants to reach more parents about the dangers of co-sleeping and other risk factors associated with infant deaths.

ABC, 6550 N. 76th St., was created to decrease Milwaukee’s high infant mortality rate by educating and empowering expectant and new mothers. The organization has been operating for six months.

Many women enter the program with no education about pregnancy, parenting or breastfeeding. They may also have housing issues or fathers who aren’t involved, said Program Director Victoria Brown, who heeded a call from Kingsby asking if she was interested in creating a program that could help save newborns.

Brown worked 18 years for Aurora Health Care in women’s health and eight specifically in labor and delivery. She left the agency after suffering a stroke last year.

Data from the Milwaukee Health Department (MHD) showed that 96 infants died before the age of one in Milwaukee last year, the lowest number on record. However, the rate for African Americans was 15.1 deaths per 1,000 live births while the city’s overall rate was 9.6, according to the report. 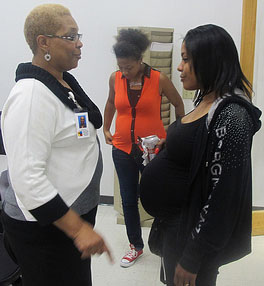 The program is open to all women but most participants are African American.

“I tell them to watch the news; that it could have been you,” said Brown, when talking to clients about the latest report of a co-sleeping death.

More than 200 women are enrolled in either the Pre-Natal Care Coordination class or Care Coordination Classes (CCC). They first fill out a questionnaire, which helps identify risk factors that could negatively impact the health of their baby or themselves, according to Brown. The information is used to create an individual care plan developed by a registered nurse.

The women then attend workshops on topics such as what constitutes a safe sleeping environment, the benefits of breastfeeding, how to cook healthy meals on a budget and how to keep a job, among other life skills. They are paired with care coordinators, who are responsible for helping clients access resources identified in their care plan.

After the child is born, the agency offers parenting classes, along with home visits. The home visits help ensure that the baby is sleeping in a safe environment, and also reinforce the need to go to doctor’s appointments, according to Brown. “We want to keep them encouraged,” she said, adding that the approach is crucial for her clients.

Michelle Uttke, a registered nurse who works at ABC, commented that the program helps the women build an education base and a support system.

“We talk a lot about being an advocate for yourself and your family and having the information to make the right decisions based on your resources and situation,” said Uttke.

Brown acknowledged that many times those resources are extremely limited.

“We have clients who are homeless,” she said. The organization tries to connect them with agencies that provide emergency housing services.

ABC is funded by the state based on the number of Wisconsin Works (W-2) participants served. W-2 is available to parents of minor children whose family income is below 115 percent of the federal poverty level, and is designed to help individuals develop employability plans.

Some of the funding is used to buy participants a car seat, a “pack and play” and a breast pump, which the women receive when they complete the program. Brown said the agency is looking for donations or other funders, and that it won’t turn any women away.

Lawrencea Myles, 21, joined the program in August and has a baby is due in February. She already has a 5-year-old daughter, but said she never had the opportunity to experience classes such as those provided at ABC. Myles said she’s had her mother around to help her, but many people don’t have that advantage. She said she’s more informed this time around.

“I took parenting head on the first time but this is my second baby and I can be more prepared this time,” said Myles.

Myles said she never co-slept with her first child and won’t do it with her new baby either. “I know what can happen if you do,” Myles said.

Brown noted that the agency wants women to participate in the programs and then move on. “We don’t want to enable them, so once they complete their programs we say goodbye,” she said.

Clients can reenroll if they have another child, but Brown said she hopes that by going through the program the first time the mothers have gained the skills and confidence to help them raise their baby. “We believe in these young ladies.”