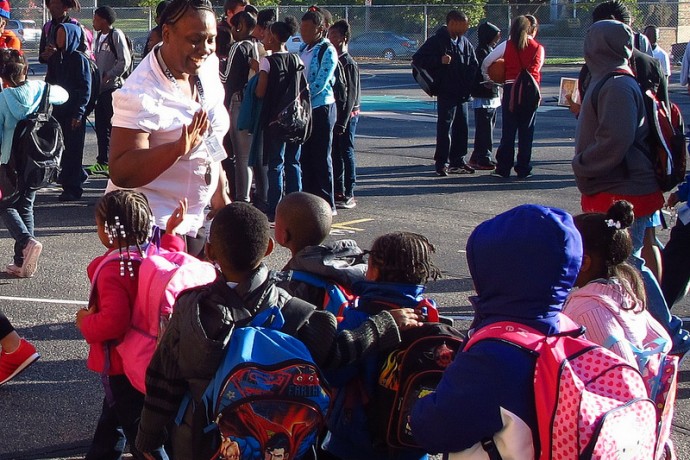 Every weekday, City Year Milwaukee corps member Katy Amphlett, 23, arrives at 7:30 a.m. to take her place on the playground at the Dr. George Washington Carver Academy of Mathematics and Science.

Dressed in a bright red blazer, she waits with nine fellow corps members and staff to greet children emerging from a fleet of buses. The City Year team leads the pupils in cheers and activities ranging from reciting school pledges to hand slaps on “High-Five Thursdays.”

Overseen by Principal Janel L. Hawkins, who has led Carver since July 2012, three nonprofit organizations—Schools That Can Milwaukee, Teach for America – Milwaukee and City Year Milwaukee—have partnered with Milwaukee Public Schools (MPS) to assist administrators, teachers and students at Carver throughout the school year.

The collaboration is the only one of its kind in the city. Carver is the only school in Milwaukee—public or otherwise—to have the collaborative support of all three organizations at once, according to Isral DeBruin, manager of communications and development at Schools That Can Milwaukee.

“This effort is aimed at improving individual student achievement by using the synergy that the partner organizations, in conjunction with strong school leadership, can provide,” said MPS spokesman Tony Tagliavia. “Our vision for the school is to create a high-performing school that neighborhood families seek out for their children.”

Supported by a grant from Northwestern Mutual Foundation, the three nonprofits are working with Hawkins as she attempts to create a “culture of joy” at Carver, which survived a recommendation for closure as part of a long-term plan submitted to the MPS School Board in late 2011. 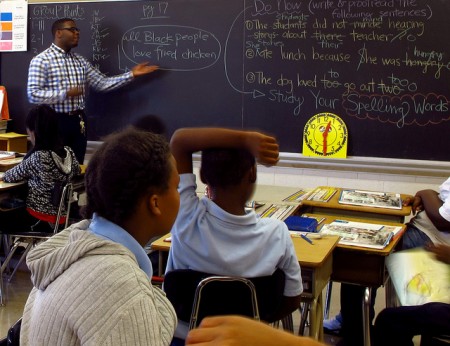 General Education Teacher Bryson Green of Teach for America leads his fifth-grade students in a discussion about stereotypes at Carver Academy. (Photo by Rick Brown)

MPS and the three nonprofits selected Carver because of its capacity and “significant room for improvement” as a K-8 school, according to Tagliavia. Carver had new leadership and teaching vacancies, both factors that made the school ideal for the collaboration, Tagliavia said.

“Each of our organizations is targeting a different aspect of the school, and by doing that we hope to accelerate the transformation of Carver under Ms. Hawkin’s leadership,” said Kole Knueppel, co-founder and managing director of school partnerships at Schools That Can Milwaukee (STCM).

The nonprofits began discussing collaborating strategically in a single school last fall, according to Jason Holton, executive director of City Year Milwaukee. In early 2013, the organizations identified Carver as an opportune site for “complementary” collaboration, and the partnership solidified over the course of the summer, Holton said.

“We’re hoping to see consistent growth in one to three years,” Knox said. “Our goal is to see that each scholar is growing.”

SCTM is providing some level of school leadership coaching this year to 34 schools, including Carver, according to DeBruin.

Teach for America – Milwaukee (TFAM) has bolstered Carver’s teaching ranks, placing four of its 119 corps members at the school as part of an effort to “close the achievement gap in low-income communities in Milwaukee,” said TFAM Executive Director Maurice Thomas.

One of them is Bryson Green, 23, a fifth-grade general education teacher. Assisted by mentors from TFA, MPS and Cardinal Stritch University, where he is a graduate student, Green instructs his pupils in social studies, reading and special activities.

An MPS graduate from the North Side, Green feels a strong connection with his students, who he says face social challenges and stereotypes.

“They’re not destined by society for college,” said Green, referring to his students, most of whom are black and from low-income families. “I want my students to have each and every option, and that’s why I’m preparing them now.”

Like his fellow TFA teachers, Green has a two-year commitment to teaching, but he hopes to remain at Carver longer to see his students graduate from eighth grade.

To help fill in the gaps before and after school, City Year Milwaukee (CYM) has committed 10 of its 74 corps members to Carver for the 2013-2014 school year.

Holton, who lives two blocks from Carver, said City Year corps members are there “before and after the bell rings” to support teachers in the classroom, provide one-on-one intervention, mentor small groups of students and provide after-school activities.

The corps members’ help in the classroom has been particularly useful, Hawkins noted.

“Our classrooms often have 25-30 kids in them,” said Hawkins. “Having that extra adult in the classroom has really helped us.”

Corps members such as Amphlett are tutoring small groups of students to help them develop math and reading skills and improve their confidence and behavior. Amphlett said students’ enthusiasm has been “phenomenal,” adding that each corps member will tutor the same group of students throughout the year.

“I’ve already seen my students make improvements,” Amphlett said. “They get enthusiastic about learning in the groups.”

All three nonprofits collaborated in a “service day” to ready Carver for the new school year in August. With support from JPMorgan Chase, team members beautified the school, picking up trash and installing murals and planters.

Carver also receives assistance from the national organization Playworks and the Brewer’s Hill-based Mount Zion Baptist Church, according to Hawkins.

Carver has dealt with poor performance and high turnover in recent years.

In November 2011, MPS’s Committee on Innovation/School Reform presented a recommendation to the Milwaukee Board of School Directors to close Carver, along with the 65th Street School, 68th Street School and Burroughs Middle School as part of its “Long-Range Facilities Master Plan,” primarily citing low enrollment relative to capacity. 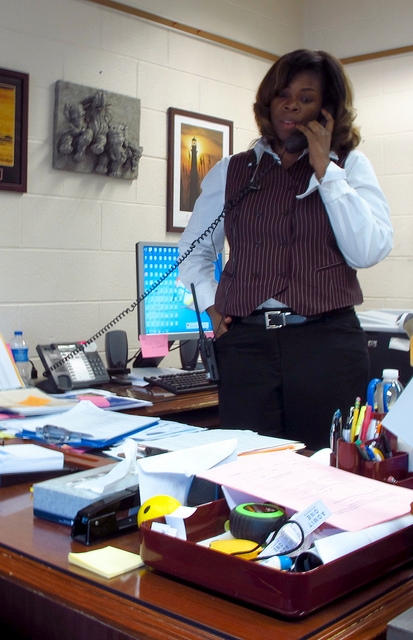 Of that group, Carver is the last school standing. Since that time, the 65th and Burroughs schools have closed, and the 68th Street School closed its doors to merge with the 81st Street School.

In December 2011, the board voted to allow Carver to stay open but froze its enrollment and opted to open Carver as a charter school in 2013-2014.

That decision stood until May 2012, when the board rescinded its earlier action and voted to re-establish Carver, setting aside the charter plan.

“It was ultimately decided that the school would be stronger as a neighborhood specialty school and we are committed to that plan,” Tagliavia said.

Poor student performance has been an issue for Carver in recent years. Carver students performed well below the Milwaukee district average for student achievement in 2012-2013, according to school report card data.

Carver also has faced significant staff and student turnover. In 2012, about half the staff left as expectations for student achievement rose, according to Hawkins. The issue has affected administrators.

“I think I’m the fourth principal in the last five years,” said Hawkins, who previously served as principal at Siefert Elementary School on the North Side for 10 years.

Additionally, the majority of Carver’s students come from outside its immediate attendance area, according to Hawkins. Most are bused, and few interact outside of the classroom.

“Our students come in on the bus and they leave on the bus,” Hawkins noted.

“A typical Carver scholar does not come from the neighborhood, may have some challenges, wants to do well, but really hasn’t been given some of the resources yet to figure things out,” Hawkins said.

Hawkins hopes to revitalize Carver and its students with the school’s newfound partnerships.

“The partnerships altogether have added energy in a place that was feeling a little defeated,” said Hawkins. “It’s made us feel like we can see the light at the end of the tunnel because we’re getting some support.”

Once Carver has developed a shared culture, Hawkins said, the next step will be to look at core curriculum areas, determine how to bridge content areas such as reading and social science, and begin to improve test scores.

In the meantime, Hawkins already has noticed changes.

“I can see that we’re moving in the right direction,” Hawkins said. “We still have a lot of work to do. But I’m already seeing sparks.”