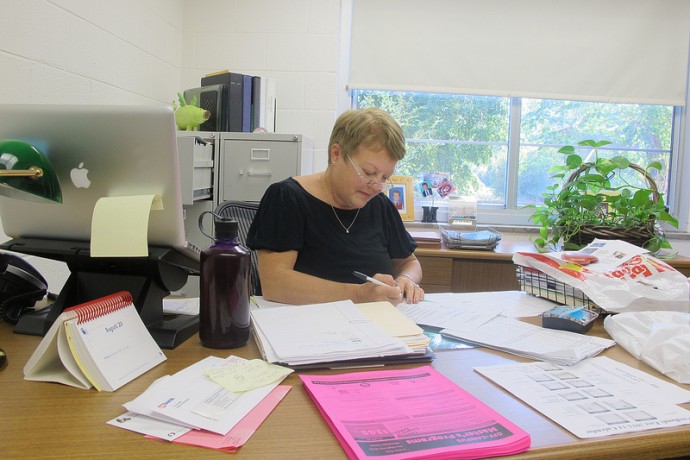 Maureen Sullivan is the principal of Woodlands East. (Photo by Edgar Mendez)

Woodlands East, authorized by the University of Wisconsin-Milwaukee, is the second Woodlands charter and serves 102 students. This year, the school houses K-4 through second grade students, but will expand by one grade level each year until it’s K-8.

Growing by one grade level each year allows the school to mold young students in the “Woodlands way,” said principal Maureen Sullivan, who added that it generally takes students four to five years to become acclimated to a school’s culture.

High demand and a waiting list at the original Woodlands led to the opening of the new school, located at 3121 W. State St. Woodlands’ board members felt that partnering with UWM, which authorizes both schools, was a good fit due to its stringent standards for recertification, Sullivan said.

UWM demands accountability, according to Sullivan. “They hold you to very high standards.”

Sullivan said her school focuses on creating lifelong learners, placing a heavy emphasis on basics such as social studies, science and math, while also including instruction in the fine arts and a foreign language. Woodland’s students begin receiving French instruction in K-4 and K-5. The K-4 and K-5 students share a classroom and teachers, as do the first and second graders.

Sullivan said Woodlands also places a strong emphasis on parental involvement. Parents are required to volunteer 15 hours a year and also are asked to bring their child to school each day.

“When families and schools are committed children will succeed,” she said.